Why Are There Dry Joints in My Brick Walls?

A historic-preservation expert suggests possible purposes for an intentional gap between interior courses of brick. 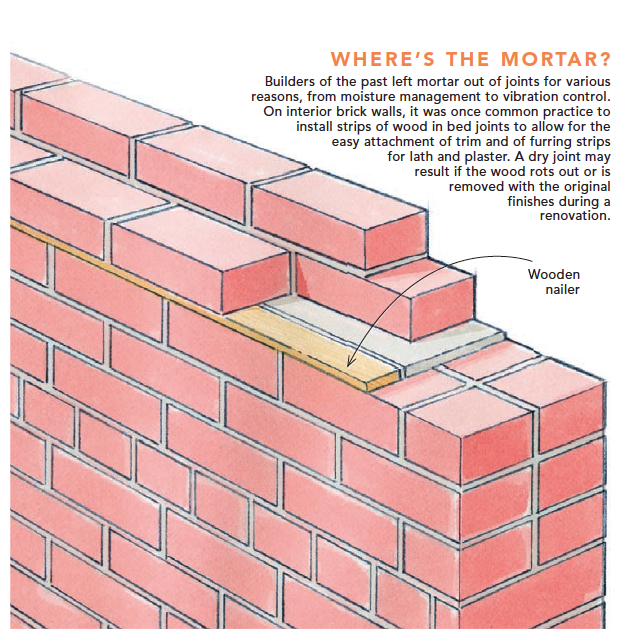 I live in Sea Bright, N.J., in a converted, two-story brick warehouse that was built in the early 1890s and sits about 300 ft. from the ocean. The walls are all solid with no cavities between wythes and are three wythes thick on the ground floor and two wythes thick on the second floor.

I’m adding a third floor. Upon removing the drywall, I came across an unusual (and disturbing) detail in the brick masonry. Every 32 in. or so up the wall, there is a dry joint between the brick courses with no mortar whatsoever. After noticing this in my building, I have seen identical conditions in several other buildings in town that have exposed original brick walls.

Do you have any idea why this was done and what purpose it served? The walls have been there for over 100 years and seem to be holding up fine, but as I’m adding a floor, I’m sure you can understand my concern. Do you have any suggestions about strengthening or stabilizing the walls at these joints? Or should I just leave well enough alone?

Brent Hull, a nationally recognized authority on historic design, responds: There are a few possibilities for these dry joints. First, there is a precedent for using an unmortared brick line as a moisture-control barrier. Typically these areas would have been tarred, or a layer of tar paper would have been laid between joints to stop water from wicking. The idea was to prevent water at the ground level from going up or to keep water from filtering down from a parapet wall at the top of a building. If the joints are on the second floor, they could be for controlling water migration. If that’s the case, it may be difficult to see the waterproofing material from your vantage point.

The second possibility is vibration control. In this case, joints were purposely laid dry so that there would be a break in the mass of the brick wall. This break (mortar not joining the mass together) prevents vibration and minor movement from traveling up the entire wall. We don’t see this in Texas, where I live, but it may have been a local practice in Sea Bright, where a railroad passed through from the mid-1860s until well into the 20th century. As you know, the town is very narrow, and nearly every building would have been close to the tracks in the late 1800s.

If there’s a noticeable gap, there’s a third possibility. It used to be common to put wood every so often up interior brick walls to have something to nail to, and we see it all the time in our historic work. Often these were just pieces of lath laid on the flat in the joints, and they extend back only about an inch to attach trim or furring strips for lath and plaster. It’s possible that the wood was there and has just rotted out or was pulled out during a previous renovation when the original lath and plaster was removed.

As for what to do now, your walls likely don’t need any major remediation. Have a mason or engineer check them out to see if the purpose of the joints can be determined. If they were there for vibration or moisture control, leave the walls alone. These walls have worked for more than a century. Even if you wanted to “fix” them, I’m not sure how you would go about it. If it’s just a case of missing nailers, the bricks are likely partially supported, but it probably wouldn’t hurt to have a mason repoint the dry joints. Whatever the case, I think this construction technique offers a unique insight into the issues craftsmen faced in the past. It’s a fascinating piece of history, in my opinion.

Need help? Get answers you can trust from the experienced pros at FHB. Email your question to [email protected]. 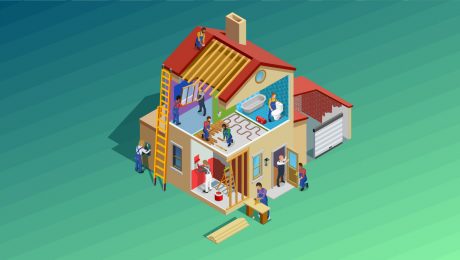