Putting a New Window in an Old Brownstone

In Brooklyn, where turn-of-the-century brownstones and bricks are the norm, window replacement often calls for some ingenuity. I have used both Bonneville and Andersen brick-to-brick replacement windows. These units are custom-made to be 1/4 in. narrower than the brick opening, with a brick molding already attached. In theory, they drop into the opening and are strapped to the interior-wall framing with vendor-supplied galvanized straps. Caulk the brick moldings to the bricks, and you’re done. But with solid-brick walls, what do you strap the new window to? 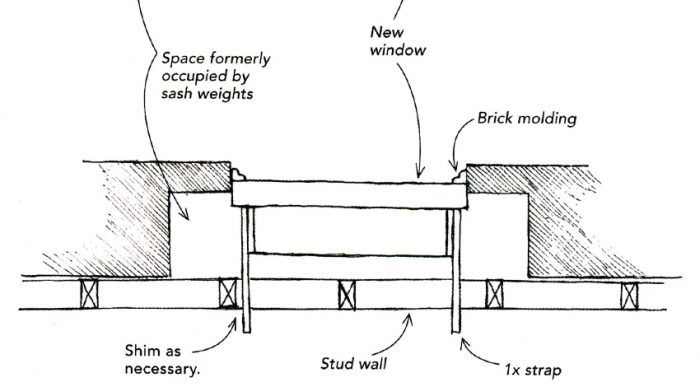 When old windows are removed, the area once occupied by the sash weights is now a large void. Rather than make a mountain of unstable framing in the void, I improve on the strap idea. As shown in the drawing, I screw 2-in.-wide strips of 3/4-in. plywood to the sides, bottom, and top of the window. Now I can attach the plywood strips to the stud wall, shimming as necessary to square to the window. The strips then are cut flush with the studs. The strips also serve as support for jamb extensions or drywall. Before installing the drywall, I stuff the sash-weight voids with insulation.