One of Ontario’s first insulated rammed earth home is a testament to the method’s attributes.

According to Sylvia Cook, principal of Aerecura Rammed Earth Builders, the rammed earth construction technique is several thousand years old and is thought to have originated independently in both China, where original rammed earth sections of the Great Wall are still standing, and the Iberian Peninsula. Examples dating to the 13th century are the Hakka Tulou—a series of five-story round apartment buildings in China—and the Alhambra Palace in Spain. 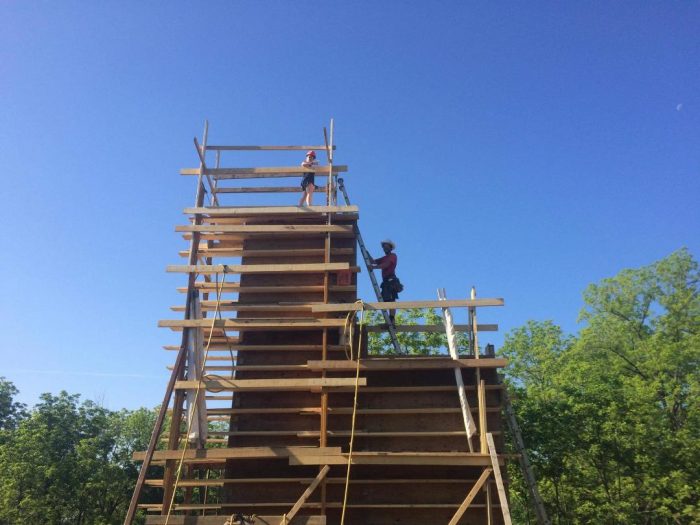 The technique has a lot to recommend it. The green building benefits include low embodied energy, recyclability, high thermal mass/low energy loads, and non-toxicity. For those reasons Terrell Wong, principal of Stone’s Throw Design Inc. in Ontario, Canada, is a fan of the material and the method. She also appreciates the durability and longevity of rammed earth houses. When describing rammed earth to her clients, Terrell says: “It is the structure, the insulation, the finish, and the thermal mass for a building. It will never need painting and it will last 500 years, if not more.” 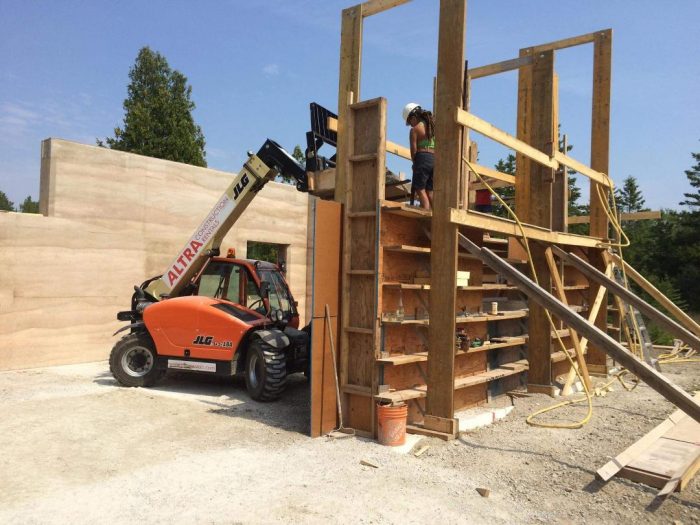 Rammed earth walls are built in panels of approximately 11.5 ft. in length with flexible joints. The material is a mix of 20% to 30% clay, sand, and 5% to 10% cement for strength and durability. In cold, wet climates, a silicate-based waterproofing agent is often added to the mix. A foot of material is layered into formwork and compressed down to 6 in. with a pneumatic tamper. The forms are about 20 in. wide and 4 ft. tall and are often built of Marine-grade plywood and 2×12 walers. When a wall has more than one panel, a recess is added to one end of the first panel, and the second panel is molded into that space, locking them together. Walls are rammed in place, and conduits for pipes and wires are added during the process. As with concrete pours, it’s important to know where conduit and windows are going because they can’t be moved once the wall is up. Typically, walls dry and are done in 24 hours, and they have a load-bearing capacity on par with concrete. 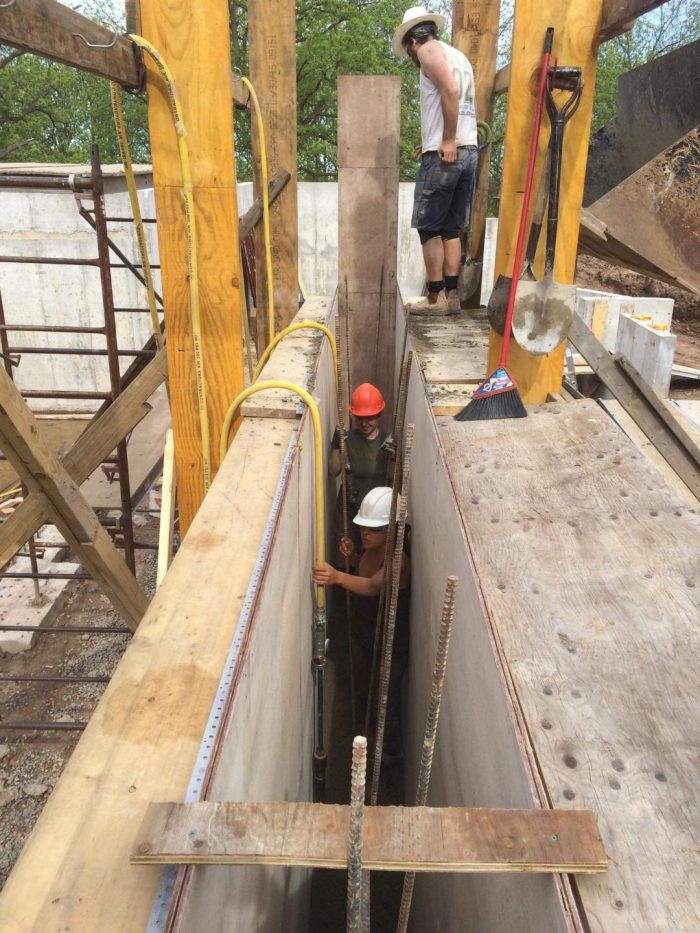 For the past 10 years, Terrell has designed three to four rammed earth houses per year. She says it’s still something of a fringe method in Canada and the States, noting that there are just two or three builders doing rammed earth construction in all of Ontario. Though often said to work best in arid climates, Sylvia makes this point: “The thermal mass effect works equally well for hot climates, where heat gain is delayed, and for cold climates, where heat loss gets shifted from the middle of the night to the middle of the day, when the sun makes up the difference. This keeps the temperature consistent year-round. Our belief is that it remains a ‘fringe method’ due to lack of knowledge of the system and the fact that it will work equally well in all climates.” 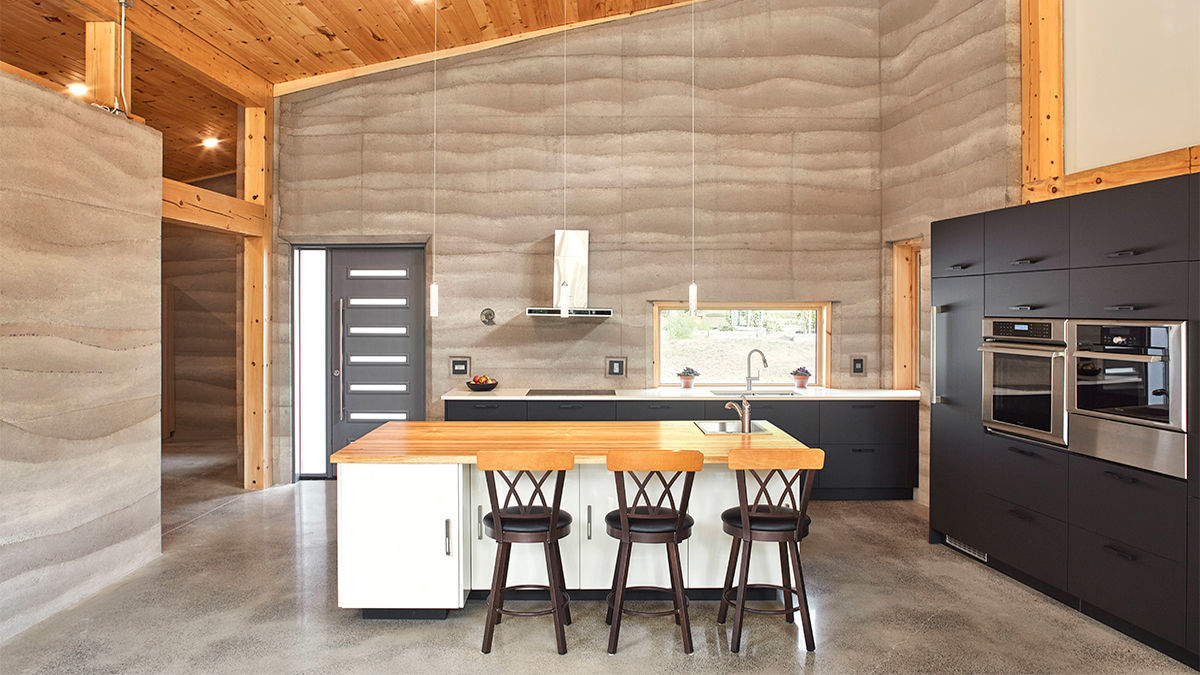 Of course, rammed earth walls are also notable for their earthy-toned striations. To get that look, pigment is added to the cement, which the ramming process moves to the edges of the board form so the colors are visible on the wall’s outermost layer. “You get this natural umbrage of color,” says Terrell. “And you can make those waves by exaggerating the up and down hills in the formwork.” 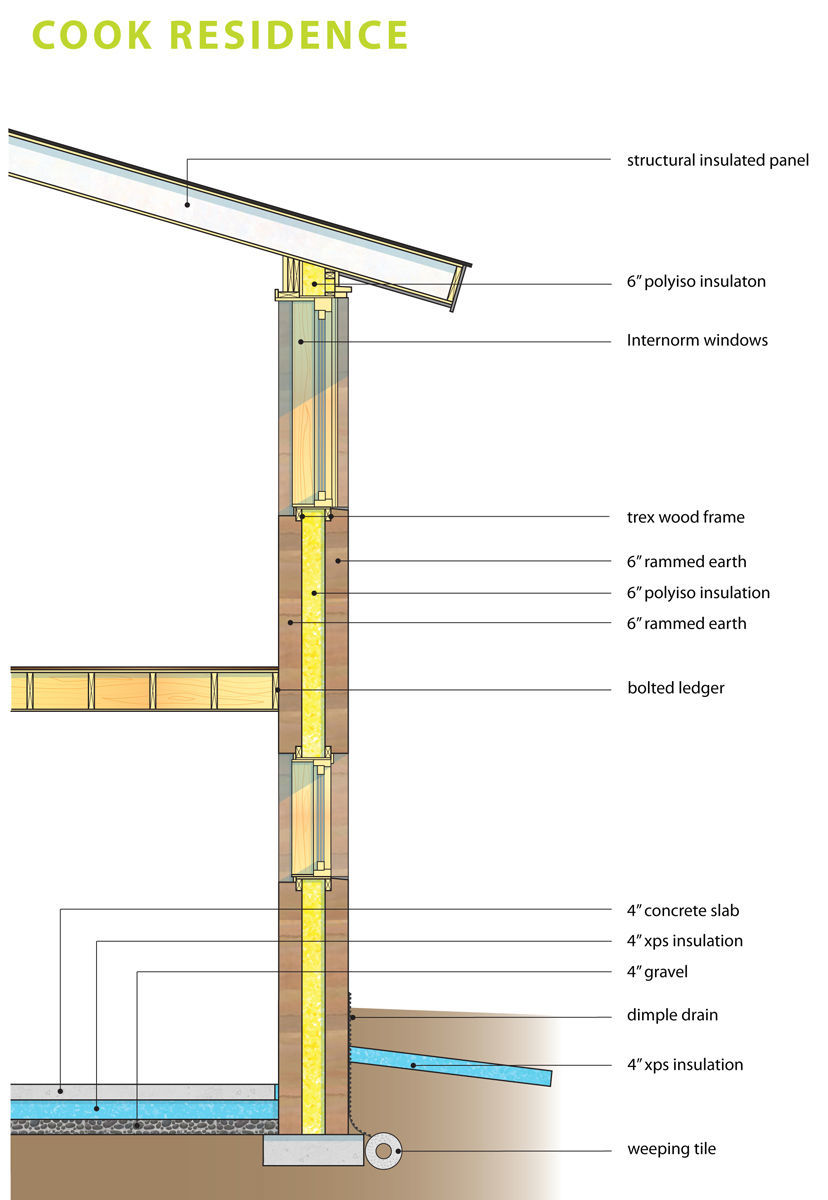 Though rammed earth construction has been modernized, North America has not yet adopted building codes for it. In Australia and New Zealand, where rammed earth houses are more common, codes have been formalized. In fact, research conducted in earthquake-prone New Zealand suggests that monolithic earth walls withstand earthquake conditions better than brick or block walls. “In Canada, we use an alternative solution that demonstrates rammed earth meets code requirements because it is much like concrete or concrete block,” Terrell explains, adding that in colder, wetter climates like Ontario’s, fiberglass rebar is needed to stabilize structures. She also integrates recycled polyiso insulation into the middle of rammed earth walls to minimize thermal bridging.

Predictably, the complexity of a project influences cost—curved or angled walls are going to be more expensive than their conventional counterparts because the rammed earth method is labor-intensive. But by keeping the design and formwork simple, Terrell was able to use the method for an affordable housing project (above) spec’d for Passive House standards. 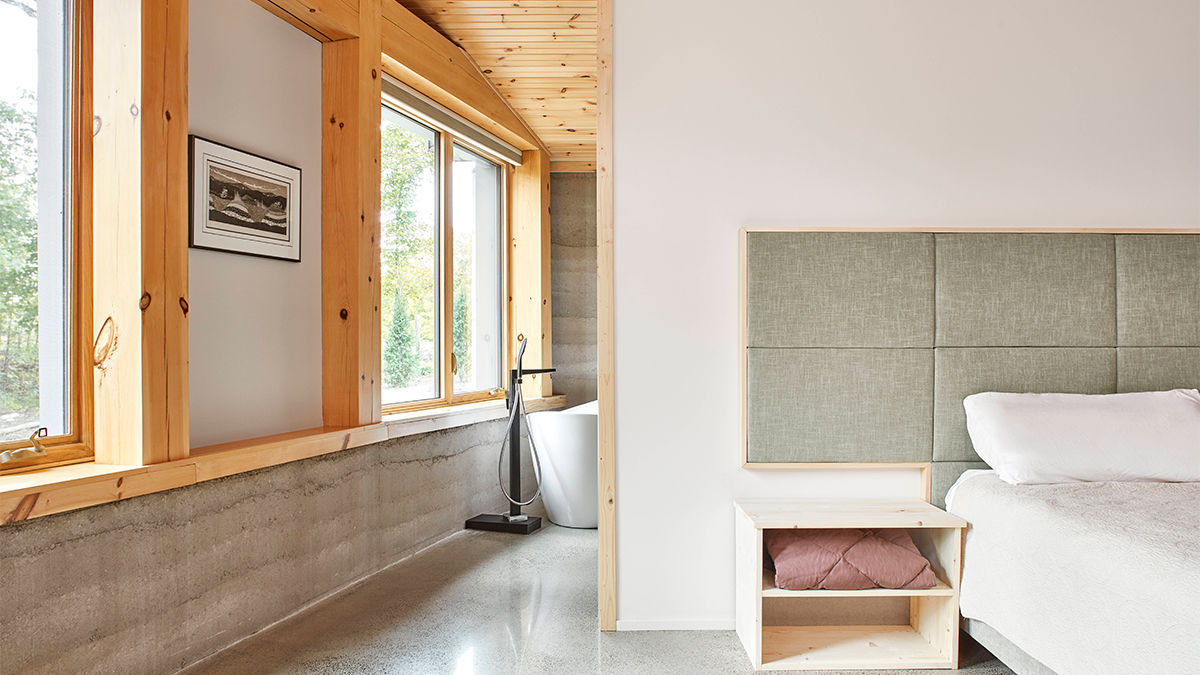 Many rammed earth homes are hybrids. They can be a combination of stick- or timer-frame walls, particularly for interior partitions though Terrell regularly uses cabinetry to divide spaces. Some have insulated framed external walls with rammed earth internal walls. Terrell likes the combination of rammed earth on the bottom floor and a straw-bale upper floor; she has also seen CLT-panel roof versions. 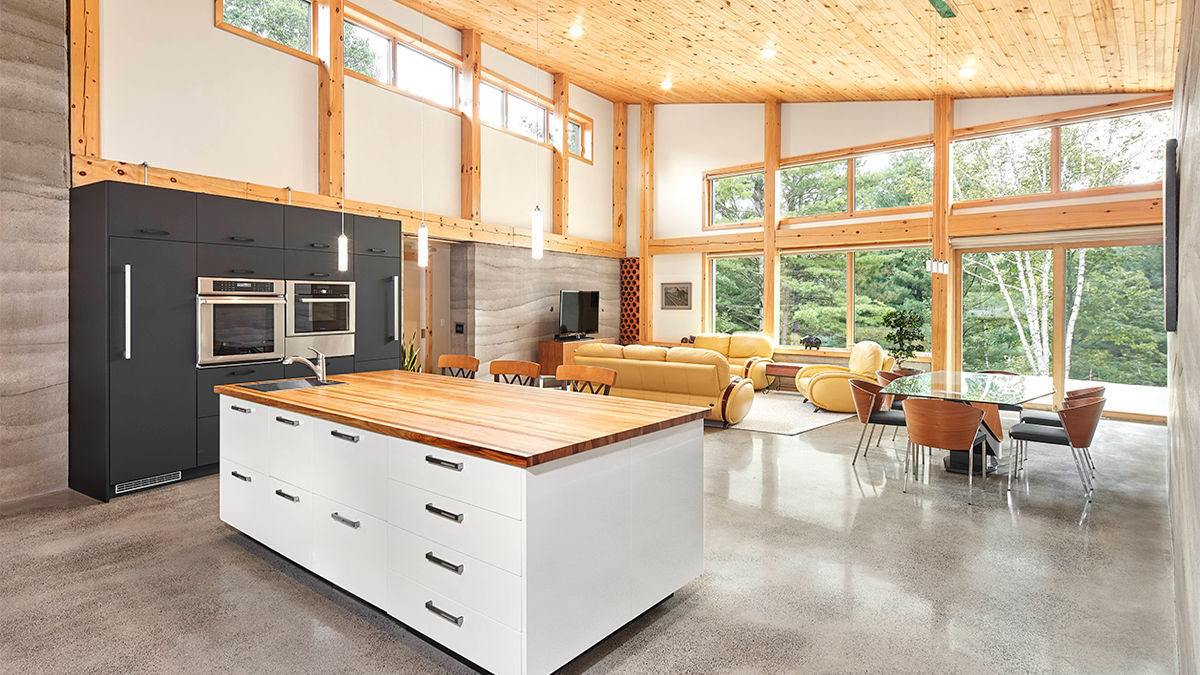 For the project featured here, Terrell was charged with designing a single-family home in a small rural subdivision surrounded by woodlands. Using Passive House strategies, she worked with Aerecura to reduce energy use by: maximizing the thermal mass potential of rammed earth, harvesting southern light and cross breezes (the rammed earth walls enhance the passive ventilation), and adding windows and overhangs where appropriate. The result is a home whose natural cooling capacity omits the need for mechanical equipment. For heat, the house uses roughly 20kW/h/m2 annually. 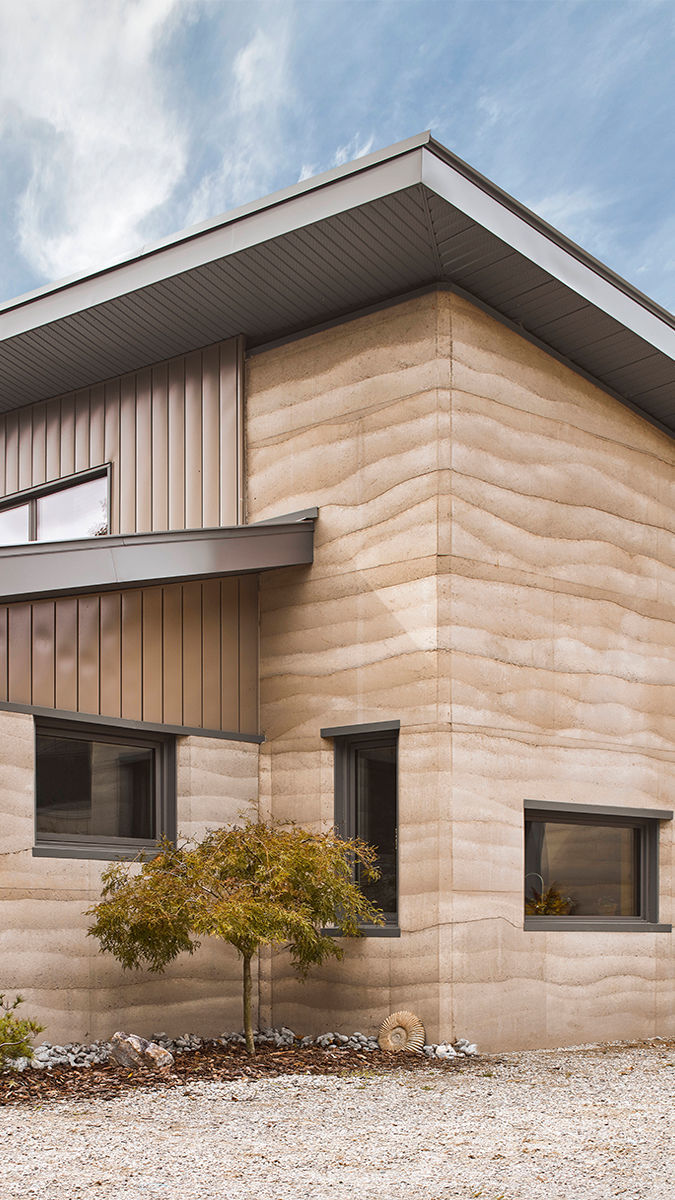 The exterior walls comprise 530 tons of thermal mass in the form of two 6-in. wythes of rammed earth around 6 in. of insulation. Because 90% of the unprocessed material came from a nearby gravel pit, the embodied energy of this house is exceptionally low. Recycling efforts included repurposing some of the formwork on the interior, and the main stair is salvaged wood from a local roundhouse. 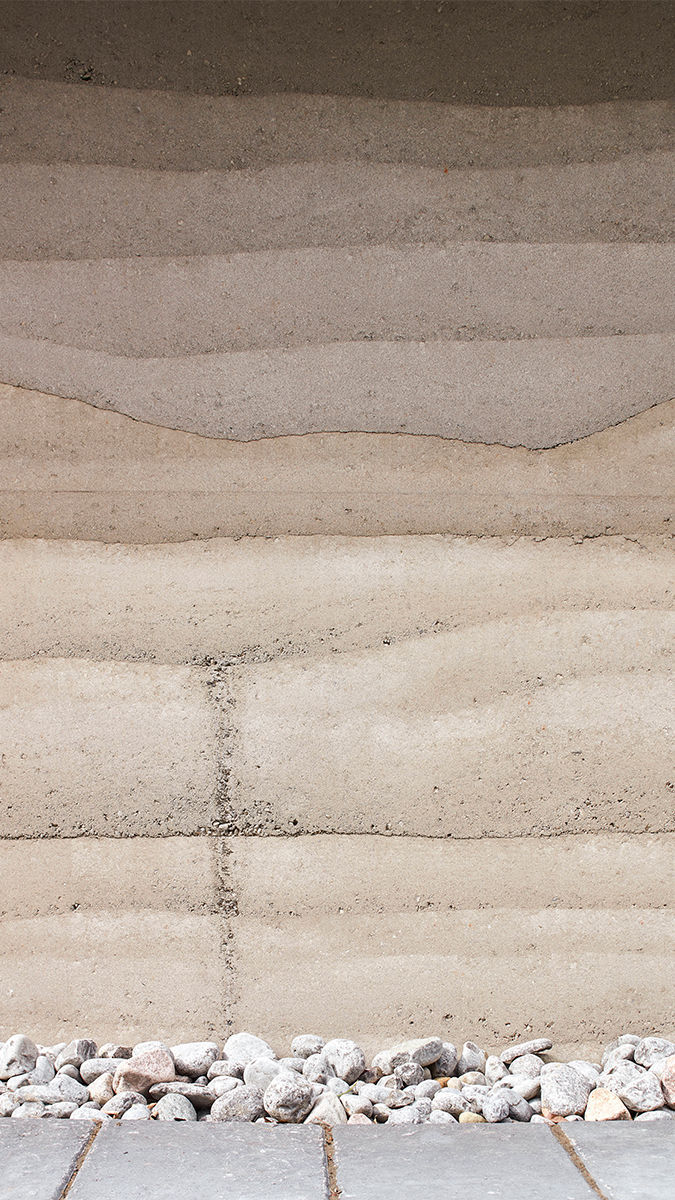 Photos by Riley Snelling, courtesy of Stone’s Throw Design, except where noted

Create a Dry Space Under Your Deck

See 4 options for redirecting rainwater so that you can create storage or living spaces below an elevated porch or deck.