Static electricity, "leaky" dimmer switches, or one of several sources of electromagnetic radiation may be to blame for occasional flashes of light from fluorescent fixtures that are switched off.

Something spooky seems to be going on with my table lamp. Even when off, the compact fluorescent bulb inside it flickers— sometimes even after the lamp has been unplugged for days. What’s happening?

David K. Warfel, a lighting educator and designer, responds: All compact fluorescent lamps (CFLs) have an electronic ballast contained in the plastic part of the base. This can store up electricity that is used to jumpstart the bulb when you turn it on. After turning it off, it may still have some electricity stored and try to turn itself on.

Fluorescent lamps also have phosphors coating the inside of the glass—like glowin-the-dark chemicals—and these can glow when warm. It’s why CFLs can take a while to reach full brightness (the phosphors are heating up) and glow after being turned off (the phosphors are cooling down). Combine that with the ballast and you could get some flickering.

Some dimmers will let a little bit of electricity through even when “off,” which can lead to a flicker in both LED and CFL bulbs. Static electricity could also trigger it. The phosphors take so little electricity to glow (hence the energy-saving nature of the bulbs) that they can be momentarily set aglow by static electricity, even that which you hold in your hand. It’s like rubbing a balloon on your hair and then touching the bulb instead of a metal object—instead of a shock, you get a flash of light.

Now, if you take the lamp out of the socket and it flickers continuously for a long time, there may still be a simple explanation. All light is electromagnetic radiation. Visible light is on the same spectrum as WiFi, cell-phone signals, radar, and ultraviolet light, to name a few common examples. Electric current flowing through the wires in your walls also emits electromagnetic radiation. Any of these sources—or even just putting a CFL in the sunlight—could cause it to slowly gain electrons. Long-lasting specialty induction lamps rely on this principle and have no wires connected to the inside of the bulb. I suppose sunspots and solar flares could also produce the flickering (up north they call it northern lights). I can see why Tesla and Edison were so captivated by electricity. It’s pretty amazing. 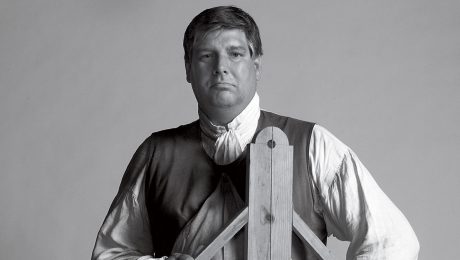 This master carpenter keeps 18th-century techniques and processes alive in the construction of colonial-era buildings.