Help for a sagging porch.

I am starting a project for someone which involves replacing the railings around a front porch, and to repair a droop in the middle of the porch floor. The sag goes across the center of the porch parallel to the front of the house, to which it is attached. This is a bungalow style home typically found in the midwest. My suggestion to Mr. customer was to remove the deck boards, (and joists) replace the sagging beam then reapply the deck. The deck boards appear to be in good condition. But no, he insists on jacking the porch up and putting a block or something in the space created by the raising. My feeling is that if we do jack up the porch we could possibly cause undue stress on some other part of the framing and it could split. Then the project suddenly becomes much more involved. Does anyone have any experience or suggestions on the latter technique, i.e. to jack it up? I am more partial to spending the extra time to place a new beam but I could be pursuaded to jack it if it makes sense to do so. 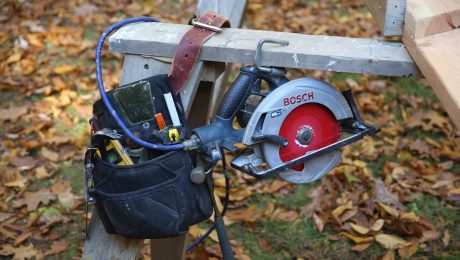