Some contractors use elaborate house jacks, and plenty of them, to repair two-story porches. Others jack and shore small sections, one at a time, eventually working from one end of the porch to the other. I’ve found both these methods too expensive because of the costly jacks and extra time involved. By restoring a fair number of two and three-story Charleston porches over the years, I’ve developed a method for repairing them well and repairing them fast. I shore up the whole porch with timbers, and never use jacks. They are just not necessary. I’ve done this on one-story porches too, but the challenge of the big ones is more to my liking.

Old Charleston is going through a major resurgence now, and there’s plenty of restoration work going on. Luckily, the town was spared Victorian buildings because so few people had any money to spend on houses from the end of the Civil War until the 1930s. So these porches, except for their poor structural condition, are originals. They are elaborate additions to wood or brick houses built after a major fire burned many of the wooden ones in 1861. They also survived an earthquake in the 1880s. Since porches were always popular in Charleston’s hot, muggy climate, they were never removed, except for those that removed themselves.

To restore the two-story porch shown here, we had to replace column bases and plinth, some rotten decking, the sill and damaged hand rails. Luckily, the roof was in good shape, but it was a pretty extensive job nonetheless. We had to raise the second-floor porch deck and roof so the first-floor columns could be removed or lifted for repairs. The trick was to raise the roof no more than absolutely necessary. It was attached to the house at two points, and over the years had settled into a comfortable position. Disturbing this by too much jacking could have ripped the porch roof away from the house.

My method for taking the weight off the columns by shoring up the whole porch at one time allows us to perform each task only once. This saves a lot of time. Because of the weight involved we use 4-in. by 6-in. shoring timbers of southern yellow pine at each column. I notch the tops of the timbers to receive the sill beam of the second-story deck. The angle of the notch is not critical. I place the base of the shoring timber on a 2-in. by 6-in. plank about 4 ft. long, and insert an oak wedge between the timber and the plank. The timber should be long enough so that its base is about 4 ft. from the porch; this leaves enough room to work. 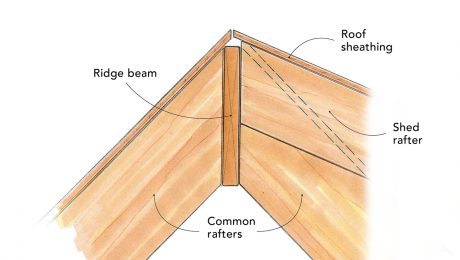 View All
View All Restorations Articles
Shop the Store