A California mason combines the adobe look of a kiva with the heating efficiency of a Rumford.

Synopsis: Rumford fireplaces were developed in the late 18th century as a way of making conventional fireplaces more efficient. This article describes how to blend this proven fireplace design with the aesthetics of a circular Southwestern-style kiva.

The city inspector said it was the first house he’d ever seen built entirely from faxes. The supervising contractor seemed to be on the phone every other minute as the owners and the architect became absorbed in the project. For the crew, frustrations occasionally outpaced pride of accomplishment. Carpenters immersed in a complex job often had to revise the previous day’s work as fresh ideas poured in.

My partner, Marshall Dunn, and I were luckier. The architect and the contractor always managed to keep changes one step ahead of the masonry work. We had to change our plans several times, shift our setup lines and recalculate our numbers, but we never had to tear out any work. We were asked to build a fireplace that would fit in with the Southwestern style of the house. The rounded shape of the fireplace, its arched opening and its plastered finish would be reminiscent of a Native American ceremonial kiva structure.

The circular shapes found in the architecture of Native Americans reflect their belief in the cyclical characteristics of life and nature, such as the progression of the seasons. Ironically, as the fireplace itself progressed from drawing board to finished fireplace, its appearance changed dramatically. But despite the changes, we were determined to build a fireplace that would burn efficiently and cleanly.

The only fireplace design that would give us the performance we were seeking is the Rumford, an extremely efficient fireplace design developed two centuries ago. So I started looking into the possibility of building this little kiva fireplace with the proportions and configuration of a classic Rumford.

Start with a good foundation

Every good fireplace begins with a good foundation, and our kiva was built on top of an 8-in. thick reinforced-concrete slab that was tied in to a fully grouted (all voids filled with mortar) and reinforced 8-in. concrete-block perimeter.

We formed the slab on top of a 1/2-in. thick cementitious backerboard, which we left in place after the slab had cured. The space directly under the fireplace floor is sometimes left open as a place to pile up ashes that get swept through an ash drop in the firebox floor. However, with a living area below the fireplace, we opted to leave the space under the slab empty.

We set our slab about 17 in. off the subfloor, which was 2 in. lower than the finished height of the stone hearth and bench that would run in front of the kiva and along one wall. The hearth and bench sit on top of a mortar bed that is supported by backerboard on top of a short framed wall that forms the curve of the bench. 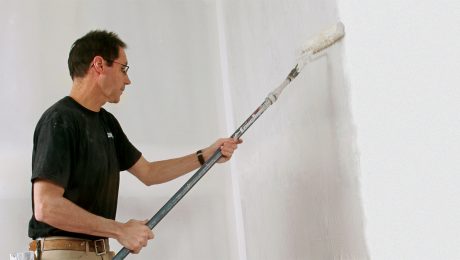