Synopsis: Putting a sink in a kitchen island used to mean running a complicated vent loop up, down, and under the floor until the line ultimately could be vented through the roof. Enter the air admittance valve (AAV). This handy gadget is a one-way valve that allows air to enter the drain line when the sink is drained while preventing sewer gases from entering the home. Lynn Underwood, a building official in Norfolk, Virginia, gives the pros and cons of AAVs. You’ll learn where you can use them, how to install them, and how to convince your building inspector if he or she is dubious. 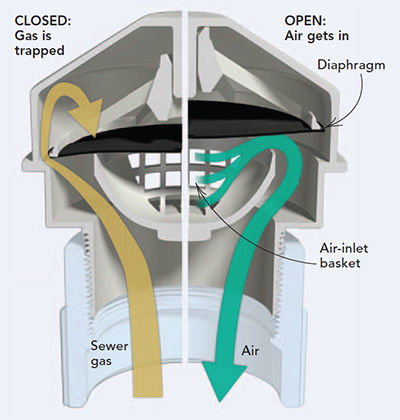 Adding a sink or a dishwasher to a kitchen island isn’t quite as simple as just tapping into the water supply and the drain line. You also need to vent the drain line (usually through the roof) to keep water in the sink trap. Without this vent, water in the trap can be siphoned out when someone flushes a toilet or drains a bathtub, allowing smelly sewer gases to seep into your house. A vent pipe is easy to install in some situations, but kitchen islands and many plumbing-project remodels pose some major venting challenges.

Air-admittance valves (AAVs) solve these problems elegantly. An AAV allows air to enter the drain system through a one-way valve that then closes by gravity after the sink drains. This valve keeps the water trap sealed and sewer gases out of the house. AAVs have many other benefits, too: fewer holes to cut through framing; fewer holes to cut in your roof; and up to 75% less pipe in your house.

It’s not new, but it’s not conventional, either

Invented in Sweden nearly 30 years ago and used widely in Europe for the past 20 years, AAVs now are accepted in North American plumbing and building codes. AAVs are not as widely used as they could be: Many local jurisdictions have accepted AAVs as a standard fitting, but some inspectors remain suspicious. It’s a good idea to talk with your plumbing inspector before adopting unfamiliar technologies in your building project. The Partnership for Advanced Technology in Housing (PATH), a public-private partnership sponsored by the U.S. Department of Housing and Urban Development (HUD), listed AAVs as one of its top-10 building technologies for 2004.