How to Design and Assemble Rustic Oak Kitchen-Island Brackets

For this custom island, Peter Polcyn of Rail and Stile Custom Woodworks designed the brackets to look like they could have been right at home in a barn a hundred years ago. To get the look, he reclaimed lengths of 3×3 rough-sawn white oak used to separate stacks of material at his supply house.

To make the brackets, he works sequentially beginning with the L before integrating the brace. Peter doesn’t use glue or fasteners—just half-lap joints with pegs to lock the assembly together.

Working from a single piece, he begins by cutting the 12-in. arm and 16-in. leg, then laps them to mark the joinery. He uses a small adjustable square to mark the depth of each lap joint halfway through each piece.

On a miter saw, he uses the trenching feature, setting the depth of cut just shy of halfway. Then he makes a series of cuts along the entire length of each joint, about 1/4 in. apart, leaving a series of 1/8-in. waste that he lathes away by sliding the piece along the fence.

After checking the initial fit, he works to refine each joint. He starts with a hammer and chisel, but for the most part he works the chisel by hand to shave away unwanted material. Dialing in the joinery takes time. As the joints come together, he switches to a block plane to remove any remaining high spots and finesse the fit.

He uses a speed square to square up the L, and integrate the brace along the 45° edge, and then he marks the joinery. Next, he’s back to trenching on the miter saw.

On the angle cuts, instead of lathing away the waste on the miter saw, he uses his hammer to break away the remaining material. Then he’s back to chiseling, fitting, and more chiseling until he’s ready for the final pass with the block plane.

When he assembles the parts, the joinery is tight with no wiggle room. Even without pins, the bracket holds together as a solid unit.

He centers a peg over each joint using a 1/2-in. flat-bore bit starting with the L. After pounding in a common 1/2-in. dowel, he checks for square, then moves on to drill out the holes for the brace and install the remaining pins. Between the lap joints and pegs, the bracket locks togetherpermanently.

He runs the outside edges against a belt sander so they’ll fit flush against the island and countertop, and as a final detail, cuts a 45° on each end of the L.

He then moves to a Restorer tool with a nylon brush wheel to clean away dirt. Like working with a wire brush, he can do this without compromising the character of the rough stock, which is the reason he chose it in the first place.

For finish, he brushes on a heavy coat of dark stain, then pads it out with a rag and hits the pegs and edges with a sanding block to bring out contrast. And that’s it, the rustic brackets are complete.

To install, six wood screws are driven from the inside to the cabinet and a couple beads of silicone are applied at the countertop.

For more on this project, read Peter’s related article: 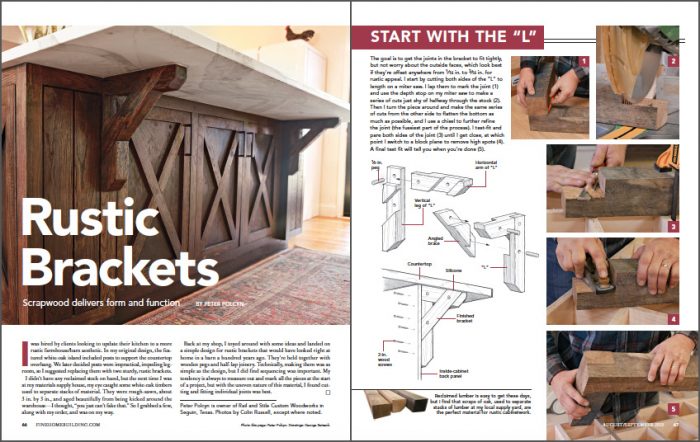 Rustic Oak Brackets – Learn how to use rough-sawn timbers and traditional joinery to fabricate sturdy, beautiful supports for a cantilevered kitchen island countertop.