Lessons learned by a first-time owner-builder

I’ve known since I was a kid that I wanted to build my own house. My dream came from a desire to do things I’ve never done before, and also from a childhood spent working on building projects with my father and brother—an unofficial family-bonding program that taught me how to solve problems.

Of course, the experience of building my own home wasn’t the only incentive. I wanted a house that I never would be able to afford if I had to hire a professional to build it.

In 2001, I bought five acres in Sisters, Ore., and moved my family into a single-wide trailer on the property (after clearing more land, we upgraded to a double-wide). Living close to the site was a must for me to get the house built in a reasonable amount of time. I expected it to take four years. Six years later, we’re still a few months away from moving in. The timeline wasn’t my only expectation that was challenged.

Would I do it again or recommend that others attempt to build their own home? Sure, and I’m happy to offer some advice based on my experience.

I knew what I wanted: a timber-frame lodge with lots of open space and windows, and a central fireplace. To save money, I decided to build a hybrid: part timber-frame and part stick-frame house.

I started designing the house myself, and I might have tried to build it from my own plans had my neighbor not offered to help. An experienced designer, she made great suggestions to cut costs, and she also was able to add a lot of detail that allowed a rookie builder to do things right. She added framing details like header sizes and detailed drawings of how to build timber-frame joints. I was lucky to have her next door where I could walk over to ask questions about roof intersections and other tricky details.

Get the tools you need

I owned only a couple of power tools and knew that I would have to spend quite a bit of money to get the tools I needed. Still, I often questioned whether spending money on a tool that I might use for only one job was worth it. Looking back, the answer is yes: Always get the right tools for the job. If they’ll make your life easier, chances are they’ll also make the finished work better.

For example, buying a plunge router only to notch timbers was money well spent. It did a better job, faster, than I could have done by hand. On the other hand, thinking I could get by without a large timber saw made life difficult because it took four passes with a circular saw to make every cut.

Some tools that seemed to have only one purpose came in handy in ways I didn’t expect. I purchased a backhoe to excavate the foundation, but the machine also turned out to be a great help when lifting heavy timbers into place.

Know when to hire a pro

With help from my brother, I’ve done much of the labor myself. I cleared all the land; installed the septic system, the water and electrical services, and the foundation; framed the house; did the rough plumbing and electrical work; and much more. Along the way, I also contracted some work, including the roofing, HVAC, masonry, and insulation. Often, the decision to hire out a job was based on time management.

When framing took longer than anticipated and I needed to protect the exposed timbers from advancing winter weather, I knew I had to hire professionals to set the trusses and to finish the roof. The job was finished only one week before the first snowfall.

Having the house insulated professionally also was worth the money. Not only is fiberglass unpleasant to work with, but a quick cost analysis made professional installation an easy choice. Because pros buy insulation in bulk, I found that I could hire a contractor to insulate the house for about the same price that the material alone would have cost me.

Trust those who know

I won’t say that a few professionals didn’t turn up their noses at my ignorance on certain subjects, but most of them were great sources of information. I was saved from a couple of potentially costly mistakes by helpful professionals. When the concrete supplier showed up to pour the foundation, he told me that the forms were not ready, and he diverted his trucks to another project. I wasn’t charged, and he was right: Even after bracing the forms as he suggested, a couple of small blowouts occurred.

Another valuable resource was the local lumberyard. The staff often recommended the best way to do things, such as how to design a floor system that didn’t squeak. When I needed a subcontractor, they always knew the best person to call, and because I was building an entire house, they gave me contractor pricing. There were other helpful suppliers as well. One lighting supplier went to bat for me when dealing with a difficult building inspector.

Speaking of inspectors, I could have done a better job of using them as a resource before starting a project. In one case, while excavating for the foundation, I spent a lot of time trying to pull a Volkswagen-size boulder out of the ground. When I realized I couldn’t get it out myself, I called the inspector for advice. He told me to build the forms over the boulder. At this point, though, I had to put the dirt back in the hole and tamp it. I wasted a couple of days by not speaking with the inspector first.

Stay on top of costs

One of the most difficult pieces of information to find was how to estimate costs. Through some online research and a few friendly experts, I estimated that a timber-frame hybrid like mine would cost $150 to $200 per sq. ft. to have built. My goal was to build it for 50% less, saving 20% in sweat equity and 30% by being my own general contractor. I’m expecting the project to come in around $72 per sq. ft.

No matter how you estimate, there are ways to make sure you’re not wasting money. Get at least three bids on large material purchases; you’ll be surprised by how dramatically they vary. When I purchased timbers, prices varied by as much as 50%; bids on installing the HVAC system varied by as much as 20%.

Be sure that you save your receipts. You will buy the wrong product or more of a material than you need. If you have receipts, big-box stores allow returns. Without a receipt, returns can be a hassle. Returning materials to the local lumberyard was easier because I had developed a good relationship with the staff.

Finally, don’t take shortcuts. A few times, I tried to save money on a material, and it ended up costing me more time than it was worth. A great example is my purchase of 2×4 pocket-door frames that were much less expensive than 2×6 frames (my walls are framed with 2×6 studs). In the end, I spent too much time furring out the door frames to meet the 2×6 walls.

Make sure your support system is strong

Building your own house takes discipline, perseverance, and a strong support system. You have to learn to balance the time and money you spend on the house with family, friends, and career. Luckily, my day job allows me to work from home, which came in handy when I needed to run out to meet a delivery truck or to buy materials from a supplier that has limited hours. Remaining focused on my job could be difficult, though, particularly at the beginning of the project when I was eager to see progress.

It can be easy to let a weekend disappear by seeing only the project. Sometimes I felt like I neglected my family. All my time and our money was being poured into the house.

For my son, my absence might have been made up by the quality time we spent together while he helped me to work on the house. My wife and I were less aligned, however. I don’t think she understood the scope of the project, and at times, it put a strain on our relationship.

At first, friends thought it was cool, if a bit crazy, that I was building my own house. Yes, friends and family would come over to help, but I was always careful not to depend on them too much. I didn’t want them cringing every time they saw me because they were afraid I would ask for favors. I tried to limit my requests for help to times when I really needed it.

Be prepared for mixed emotions

You’d think that I would be excited about finishing the house, but after such a long haul, it might end up being like a chef tasting his own food: not as exciting as if he went to a restaurant and had a meal prepared for him. I know that I’ll see the blemishes as much as the good work that I’ve done. Still, I feel a sense of triumph. Perhaps it’s an ego thing, kind of like in the movie Cast Away when Tom Hanks builds his first fire. 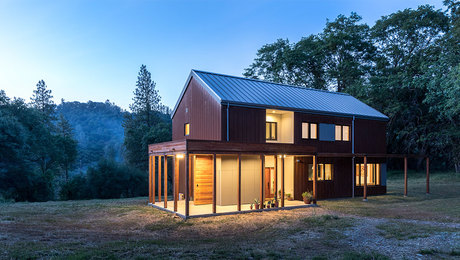 What Makes for Good Design?

A look at the qualities that separate masterfully designed homes from those that are mediocre.