American homes have more bathrooms than ever. Is it all about privacy, or something else?

I grew up in a house with seven other people, three (later five) bedrooms, and one-and- a-half baths. Built by my father, our 1954 split-level was the epitome of luxury in a neighborhood of Capes and single-story ranches. My friends’ homes all had just one bathroom, which invariably consisted of a toilet, a combined bathtub and shower, and a sink.

Recalling all of this in 2014 feels a lot like admitting to having grown up in a drafty log cabin or a home of stacked sod on the prairie—an admission tinged with nostalgia (It was cozy, really!) and based on an antiquated worldview my children won’t entertain for a second. One-and-a-half baths for eight people? That ratio is more than a tough sell these days. It’s a deal breaker. But as I and so many others of previous generations know, it worked—long, I might add, before anyone started talking about the “sharing economy.”

This makes me wonder if there’s some irony in the fact that even as we delight in swapping cars, bicycles, and urban apartments, we seem to be less inclined to share our bathrooms. Granted, bathrooms are the most personal of spaces (along with some man caves I know of), so if there’s any space worth claiming as our own, it’s the privy. And that is, in fact, just what Americans are doing. Recent housing statistics show that we’re approaching—for upper-income homeowners at least—the expectation of a bathroom for every bedroom. It’s unnecessary to add here that at higher income levels especially, we’re not sharing those bedrooms. It all adds up to an odd disconnect in this virtually connected, nothing-is-private-anymore culture: I’ll share my personal thoughts, relationships, and photos, but I want my toothbrush holder to myself.

Our bathroom boom, though, isn’t a sudden splurge. The number of bathrooms in U.S. homes has been increasing steadily since the middle of the 20th century. Unpublished data from Harvard University’s Joint Center for Housing Studies reveals a broad trend in which the average number of baths for all homes went from 1.8 in pre-1930 homes to 2.8 in homes built after 2000. Apply that to census data that places average household size in 2000 at 2.59 people, and you have more bathrooms than bathroom users. More-recent census data shows just how much we’ve come to disdain making do with one full bath and a powder room: In 1973, 40% of homes had 1.5 bathrooms or fewer, but by 2013, that number had slipped to only 5%. Today, more than a third of all homes boast three or more bathrooms.

All these bathrooms may be good news for builders and plumbers and for companies that make toilets and tub spouts. But what do they mean to the rest of us? What does it say about us when we press architects to squeeze an extra commode or two into the floor plan, or when we stand in the hallway, mentally rearranging the walls between the bedrooms so that Shiloh can have her own sink and shower?

Some argue that the personal bathroom has become a status symbol that trumps any practical purpose. Behind this phenomenon is the notion that bigger (or more) is better, which many appear to accept without question. Others even have warned that too many bathrooms create bad feng shui—because leaving all those toilets open will symbolically drain away household wealth. Of course, when you consider the cost involved in a new bathroom, that might not be too far from the truth.

As vice president of design for American Standard Brands, Jean-Jacques L’Henaff heads a team responsible for interpreting consumer trends and applying them to the business of bathroom fixtures. For the record, he doesn’t see the average American home reaching bedroom-bathroom parity just yet, but he believes that day is coming closer. Average is a key word here. Most luxury homes, bathroom-wise, have already reached the tipping point.

When we talked, L’Henaff pointed to the trend (now several decades old) of separate master baths as one driver of the multiple-bath phenomenon. Their popularity is easy to understand: Private master baths offer a retreat for harried parents as well as a selling point when a house goes on the market. It’s especially understandable considering the rise in two-income families, and our embrace of the “master suite” probably explains the 2.8-bath average that took hold at the beginning of this century.

But what’s the rationale behind luxury homes that boast four, five, or six baths? What untapped human need is satisfied with the ability to choose to use the bath with the glass-mosaic shower instead of the one clad in subway tile?

The answer may be as simple as a tape measure. “If you look at the evolution of the American home over the last 60 or 70 years,” L’Henaff notes, “you see the size has increased, while the number of occupants has decreased.” Research suggests that the size of an average new home in 1929 was 1366 sq. ft. compared to 2598 sq. ft. in 2013. Household size, meanwhile, went from 4.01 (in 1930) to 2.54. That’s almost twice as much space, inhabited by a little more than half as many people.

So what do you do? You add rooms—among them, bathrooms. You really only need one den, one kitchen, and one living room (some don’t even need that), but who besides the person paying for it is going to argue with more bathrooms? This, it turns out, raises an interesting side issue that further explains why bathrooms are so popular.

Bathrooms are expensive, with a square-footage cost several times that of an extra bedroom or den. If you look at bathroom numbers over the decades, as Erin Cammel of Kansas State University did in 2013, you’ll see that the surge in extra bathrooms in the 1980s coincided with tax reforms that led consumers to shift debt from credit cards to mortgages and home-equity lines, the interest for which remained tax-deductible. Within a few years, it had become more financially prudent to show off one’s wealth with a master-suite spa instead of a pair of diamond earrings.

To sleep, perchance to bathe

Along with bathrooms, bedrooms are multiplying as we move deeper into the millennium. According to census figures, 44% of new single-family homes built in 2013 had four or more bedrooms. (Yes, this as household size continues to shrink). That’s relevant to this discussion because a fourth bedroom has consistently been a tipping point for bathroom multiplicity. Census figures crunched by Kohler show that as far back as 1999, 42% of homes with four bedrooms had three or more baths, but only 8% of three-bedroom homes had three baths. By 2013, 61% of four-bedroom homes had three or more baths, while the percentage of three-bedroom homes with bath parity had risen only to 13%. The takeaway? With three bedrooms, folks seem able to make do with two baths. Add one bed more, and the pressure to add a bath grows significantly.

This suggests that bed-bath parity (having one or more baths for every bedroom) comes with affluence, or at least the affluence required to build a four- rather than a three-bedroom house. I’d also volunteer that anyone entertaining the thought of one bathroom per bedroom is also a homeowner who can pay someone else to clean them.

This rich-get-more-potties observation is supported by another trend in the bath industry: People aren’t relying on cheap fixtures to outfit these extra baths. On the contrary, consumers at the higher end of the market are highly sensitive to the quality and trendiness of fixtures they choose for their baths, a good thing for luxury brands—and all the more reason to build more rooms in which to showcase them.

Once we have gotten past wringing our hands over the suspicion that having multiple bathrooms signals the erosion of American culture, we might consider that the reasons for this are less psycho-social and more economic. It may, possibly, be that our infatuation with bathrooms is not tied to our devolution into a mass of self-absorbed, intensely private prima donnas (though that argument remains open). It may simply be that we’re building more bathrooms because we can. Our houses are large enough to accommodate them, our tax policies subsidize the reality of the dream home, and the folks with money are driving the trend that other folks down the line feel compelled to emulate. I have to admit that it’s not as deeply revealing as some other theories I have heard, but from a historical perspective, it is one that’s grounded in reality. You remember reality—that thing we seek to escape from by tiptoeing into that room of glistening tile, shutting the door, and turning on the steam. 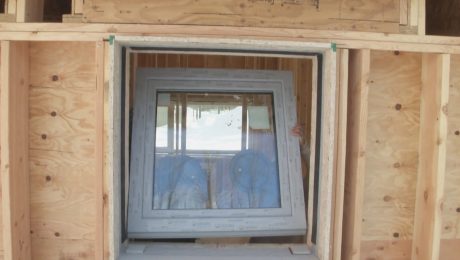 Detailing Windows on a High-Performance House

Ben Bogie explains why window installation is so important to a high-performance home, and he walks us through his process, including why he doesn't use canned foam.