After returning from a winter trip to discover his house had been flooded by a burst second-floor pipe, this homeowner was ready to address the renovations and additions he had been pondering for about a decade. It was very important to him to respect the original character of the circa-1910 small two-bedroom home that had been in his family for years, while reimagining the kitchen, adding living space, and improving upon the flow of the rooms.

The architect proposed a one-story addition and enclosed porch, which springs from the original front roofline and wraps the house to the north. An informal front dining space, complete with built-in banquette, occupies the east end of the addition and is defined by large double-hung windows sized to match those on the original house. Behind smaller casement windows installed at counter height, a new kitchen occupies the west end of the addition. A built-in bench along a new stair guardrail creates an alternative gathering spot for folks visiting with the cook. New French doors to the rear allow the owner greater access to an outdoor room edged by the house to the east, the existing one-car garage to the south, and a rear rock wall to the west.

Capturing additional interior space from a recessed porch on the rear, the first floor was reconfigured to include a mudroom entrance, full bath, and den, which could function as a third bedroom if needed. The living-room windows and entry door off the front porch were repositioned to improve room function and capture additional natural light. The wide cased opening into the new addition is sized to include the existing stairs, so the living room can borrow space visually from the addition. Upstairs, a rear shed dormer was extended to the north and south so that headroom could be increased, rendering more of the owner’s office/second bedroom as usable space. 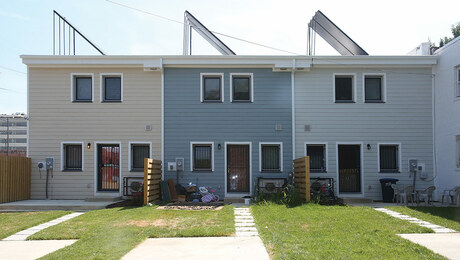