The 2018 FHB House is a net-zero energy, high-performance home in California’s Sierra Nevada foothills designed to meet the goals of the California 2020 initiative and comply with the most progressive energy code in the country. The project combines a very tight, well-insulated envelope, cutting-edge mechanical systems, and unique material choices, all wrapped up in a one-of-a-kind modern design.

A distinctive, elevated foundation combines a metal pan deck and a traditionally formed and poured basement.

The two principles of Atmosphere Design Build, Mela Breen and David Good, have created a foundation system that borrows techniques from the residential and commercial construction worlds to work around the problem areas of the site. The first hurdle was the rocky nature of the land. Excavating a full basement would be prohibitively expensive. Secondly, when they get rain during the winter and spring the runoff forms a small creek that flows right through the footprint of the house.

Their solution is a small basement foundation that serves as a mechanical pit. The rest of the house is built on a concrete slab poured on top of a pan deck. A system of stem walls and piers with steel beams support the slab. Getting up out of the dirt was time-consuming. When they were done they had a large flat slab on which to frame the walls.

Site work to prep for the foundation began with renting the biggest digger they could get their hands on to move boulders out of the footing locations. The rocky site was one reason for designing a house on an elevated slab. Another reason is the seasonal stream that runs through the footprint of the house.

Rocks that couldn’t be moved by the digger had to be broken up. Here, Dave uses a rock drill to drill a line of bore holes. The holes are filled with Dexpan, which expands overnight, fracturing the rock. The top of this rock was shaved off so the steel beams supporting the pan deck would pass over the rock.

Once the rocks were cleared and the footings dug, Dave and his crew began tying rebar.

With the footings poured, the footprint of the house takes shape. The steel beams beneath the pan deck will be supported by a combination of stem walls, piers, and beam pockets in the basement foundation.

The footings step down several feet from the front of the house to the rear. In many locations the footings are pinned to rock outcroppings with rebar epoxied into the granite.

The foundation walls for the mechanical pit and the taller stem walls are formed with the Gates forming system.

While the crew waited for the concrete to arrive the steel for the next phased was delivered. This included both the metal pan deck and steel beams.

The carpenters set the steel posts in place on the piers at their finished height.

Once the posts were in place the welder came and did all of the structural welds.

This steel beam is dropped into beam pockets in the mechanical pit foundation wall and the breezeway retaining wall.

All buried foundation walls enclosing habitable space were protected with Delta-MS by Dorken. The HDPE dimple mat creates an air gap between the mat and the concrete wall so hydrostatic pressure can’t force water through cracks and voids in the wall. The protected wall in this view is the workshop beneath the garage.

With the curbs formed in areas near grade and the rebar grid placed over the pan deck the crew begins placing concrete.

To hold the form stakes needed to hold the curb forms on the pan deck 1-in.-long pieces of electrical conduit where welded to the pan deck. The stakes were inserted into the conduit receptacles. As soon as possible during the curing process the stakes were pulled.

Visible on the left side of the picture is the culvert through the stem wall that carries runoff water under the house. A TJI floor system will span the mechanical pit seen toward the right of the picture. 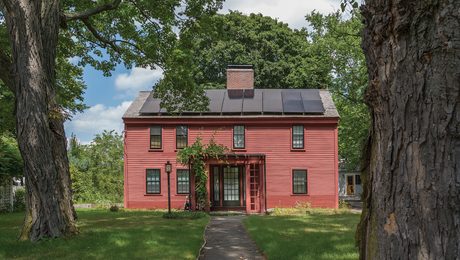 The Standard of Enduring Work

A former remodeler describes how a lifetime of work in the building industry has led him to measure the quality of work by its long-term impact on the planet.