Modern Craftsman in the Mountains

The Campbell residence in Asheville, N.C., is an inspired example of the “mountain modern” style that is gaining popularity in many regions across the country. Propped on a steeply sloping lot, the house was designed to follow the topography. The front facade faces the top of the slope, while the back side of the house overlooks the road and the primary view. Sean Sullivan, president of Living Stone Design & Build, says it was imperative to keep the house as parallel with the land contours as possible in order to maximize use of the site. “It was kind of like sanding wood with the grain,” he muses, noting that the house itself was built to be wider than it is deep in order to minimize the impact on the land. 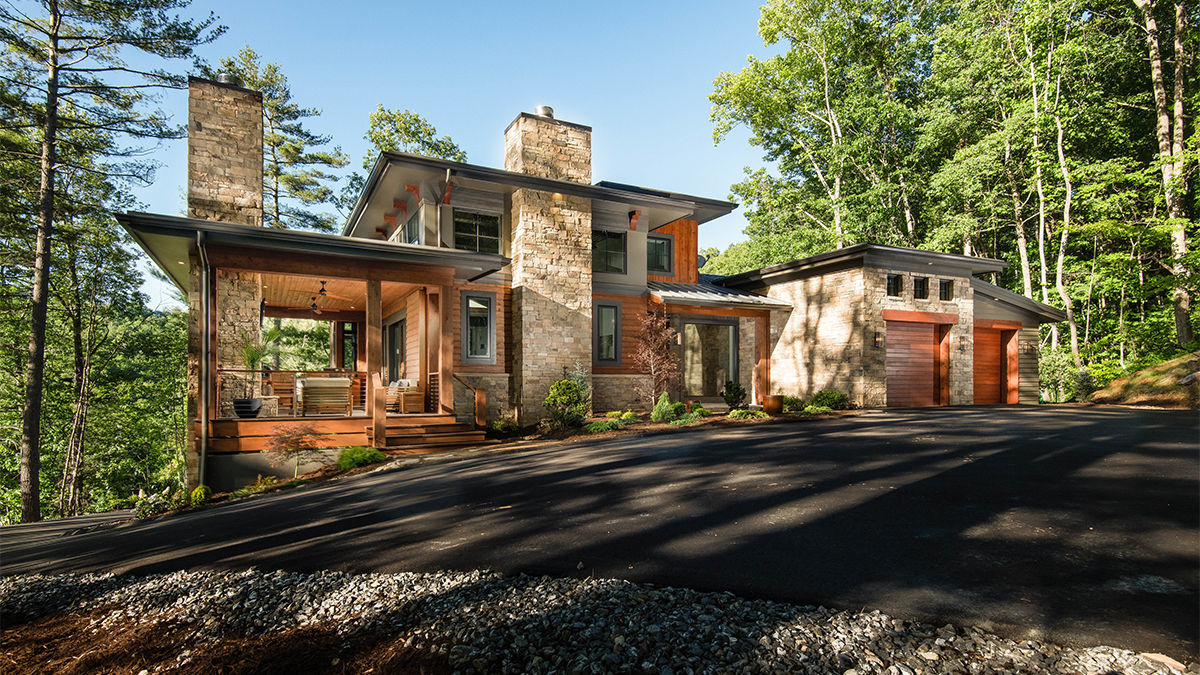 Craftsman-style homes are indigenous to the region, hence this home’s emphasis on structure and the use of natural materials such as local fieldstone and cedar—both stained and painted. Heavy-timber post-and-beam construction and eave brackets are also nods to the style. Sean responded to the homeowners’ penchant for a modern aesthetic by including clean lines and deep overhangs, which also protect against solar gain. He notes that there are no corner boards—instead, he had the corners mitered for a full reveal. HardiePlank paneling was used on the upper half of the exterior walls and soffits, which, he says, saved a bit of money. The mitered corners and stained accents were conscious splurges.

Of the Craftsman-modern blend, Sean says, “The modern style is actually not very popular in North Carolina, but a lot of our clients are moving here from the West Coast, the Midwest, and the South, where it is, so we are combining styles. In a sense, though, this is a traditional home.” 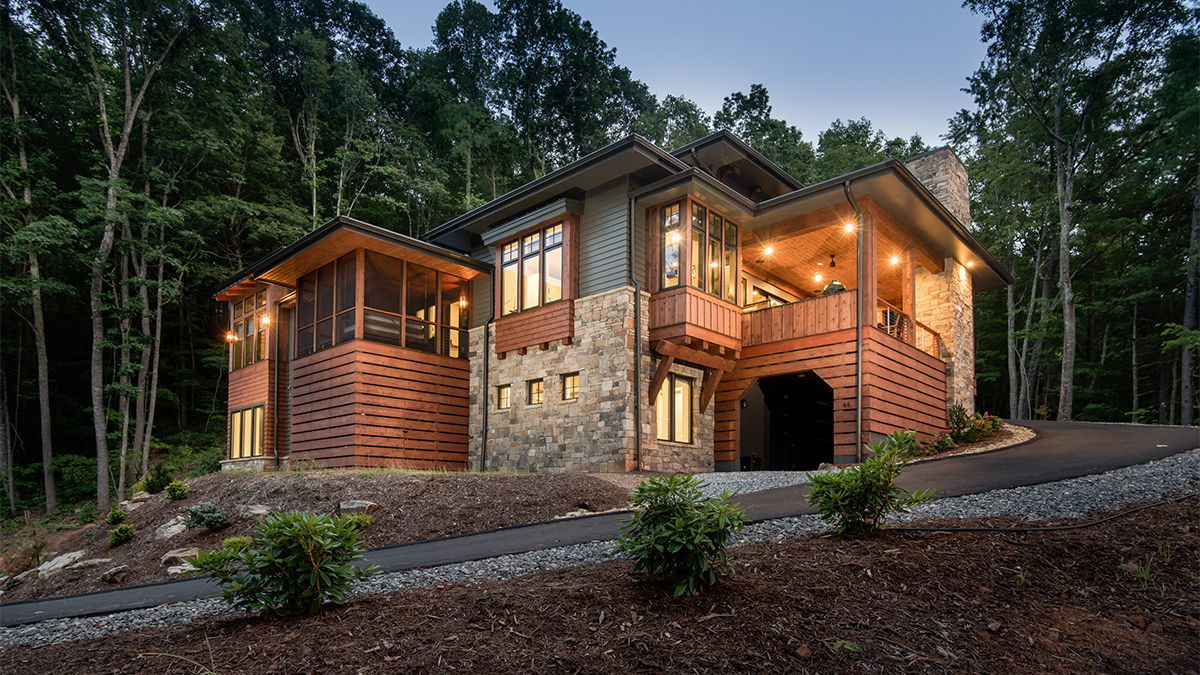 The masonry has a massive presence, which was achieved with efficiencies in mind. At the rear elevation, the chimney sits on a partial concrete foundation, which was a cost-saver. To end the stonework before it met grade not only saved money, but it also avoided cutting into the carport space. Steel support was added to the flooring of the screened porch to transfer the load from the chimney and fireplace. 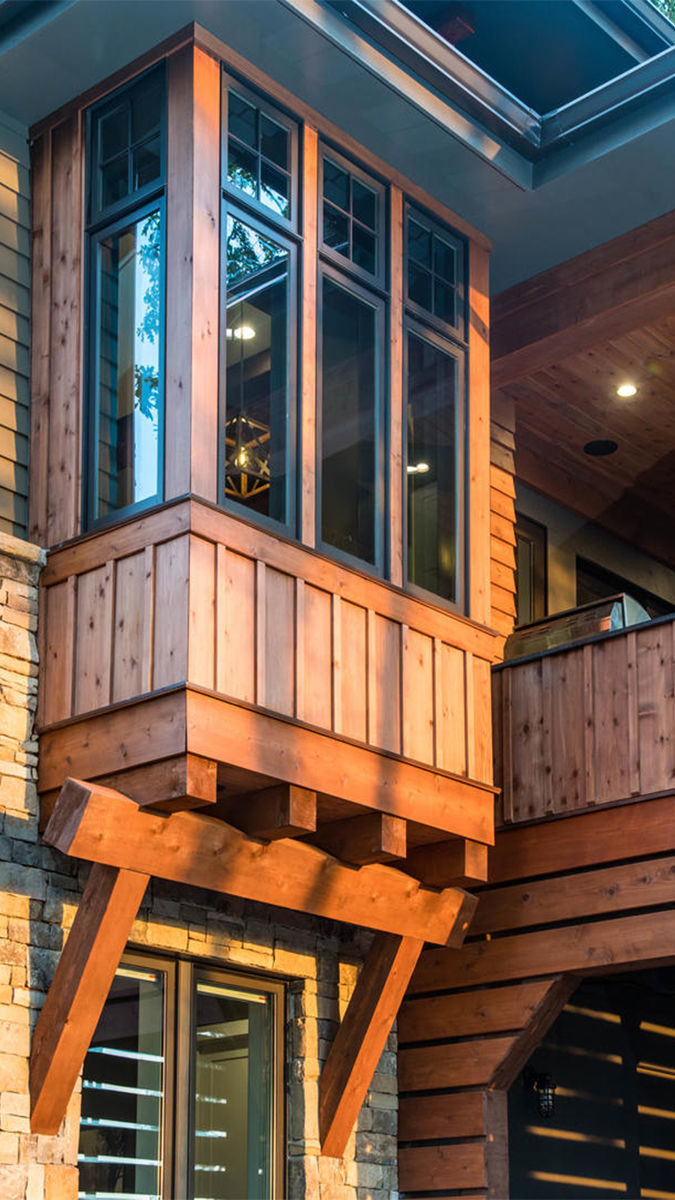 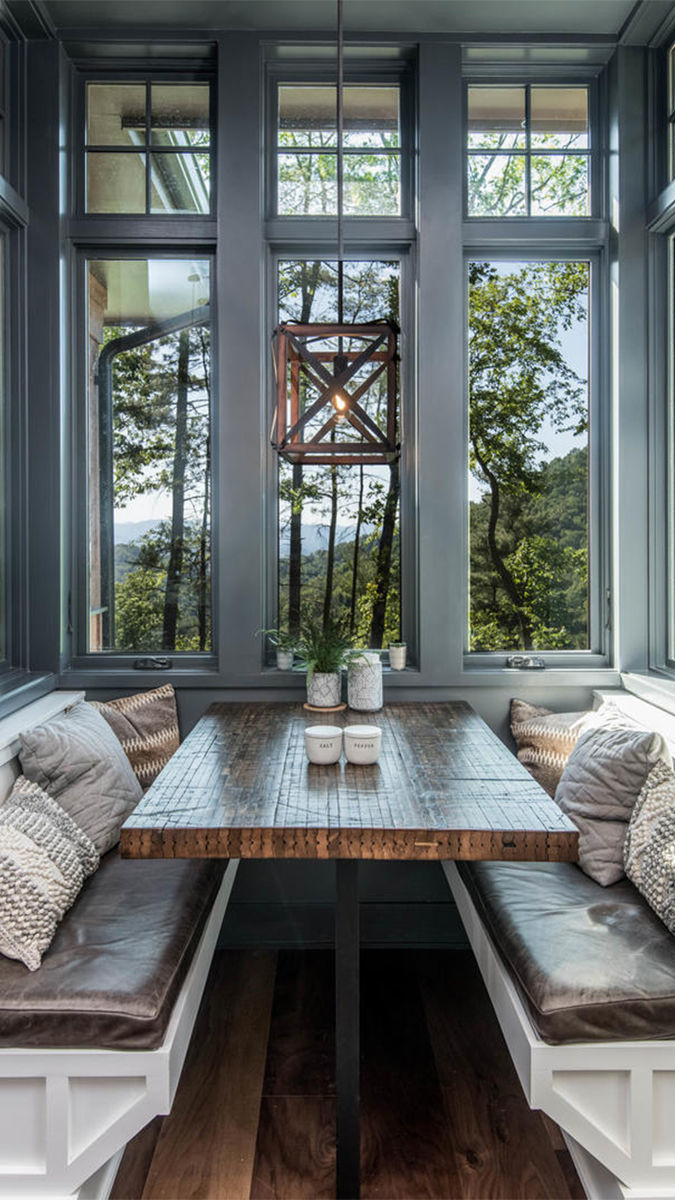 Also notable on the exterior are the heavy cedar post-and-beam timber brackets beneath a triptych of windows on the front facade bump-out, which houses a seating nook with built-in benches and table top. The family didn’t want a dining room. Instead, they planned for meals to be taken either in the dining nook or, when hosting larger groups, at the table with fold-down leaves that sits behind the sofa and serves as a credenza when not in use. “That arrangement,” says Sean, “helped us save space, and it kept the house shallow.” (Both the table top in the nook and the dining table were made by one of the homeowners from reclaimed boxcar wood he had purchased in Ohio years earlier.) 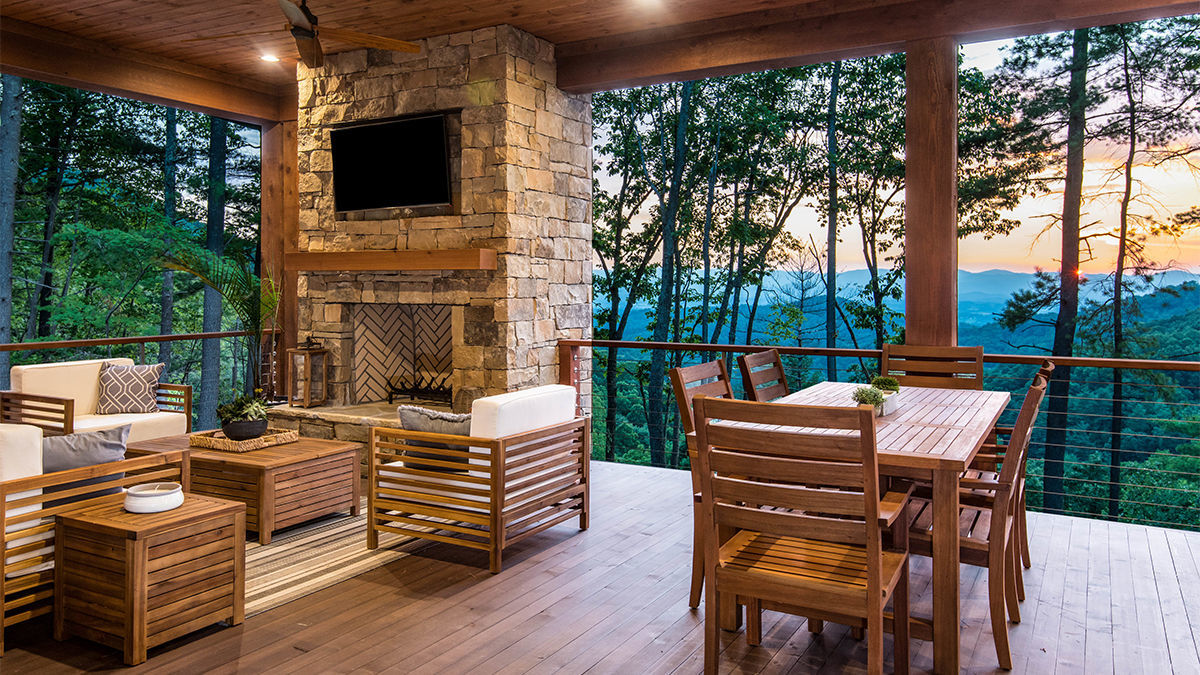 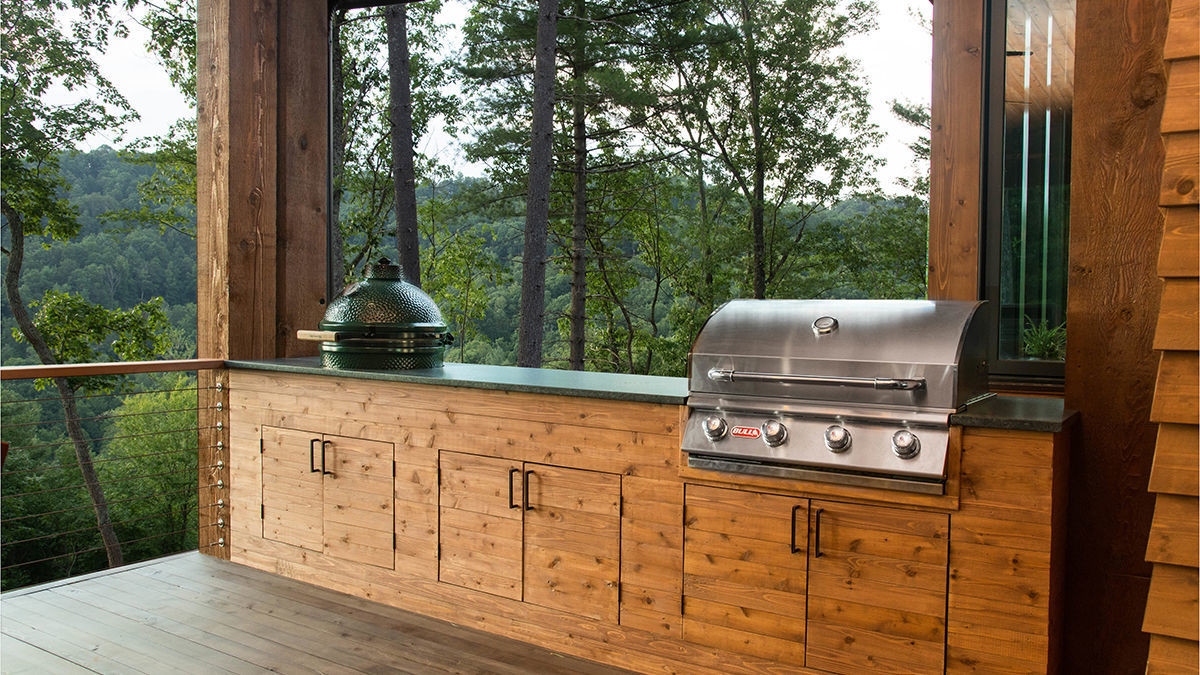 A major part of the plan was to accommodate two home offices, each of which was to have a private porch. Sited at the rear of the house with some distance between, these offices allow the homeowners to enjoy solitude and scenery while working. As outdoor living is king in Asheville, a third, west-facing screened porch was designed for the whole family and includes an outdoor kitchen. 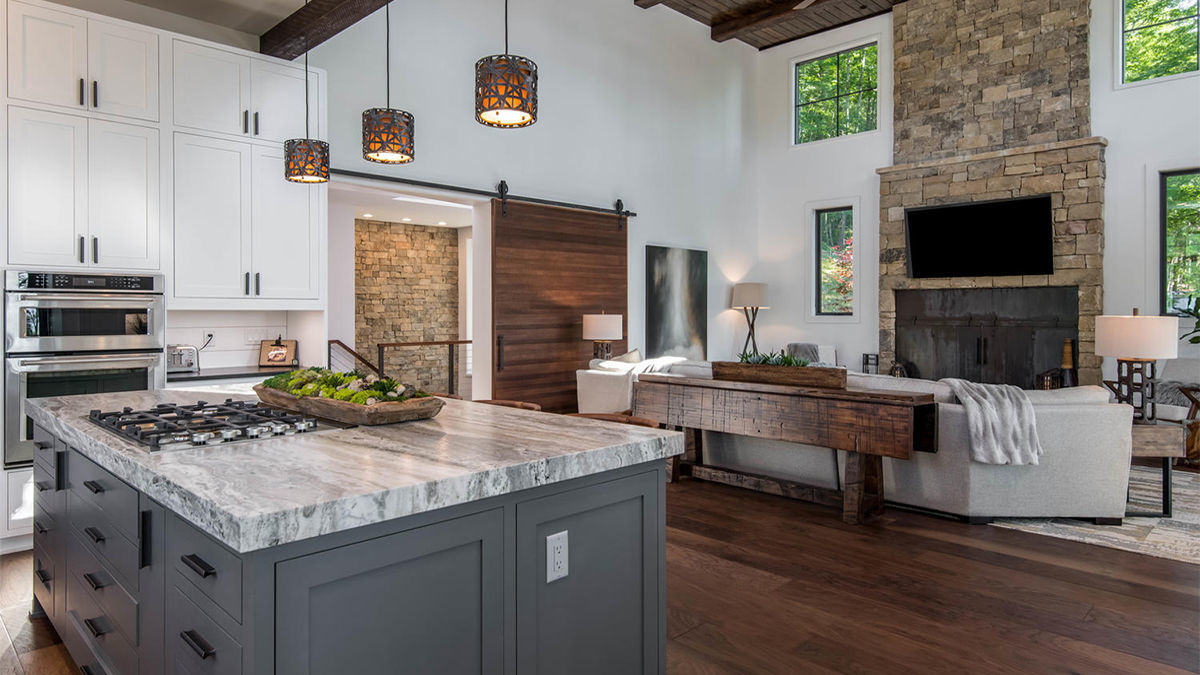 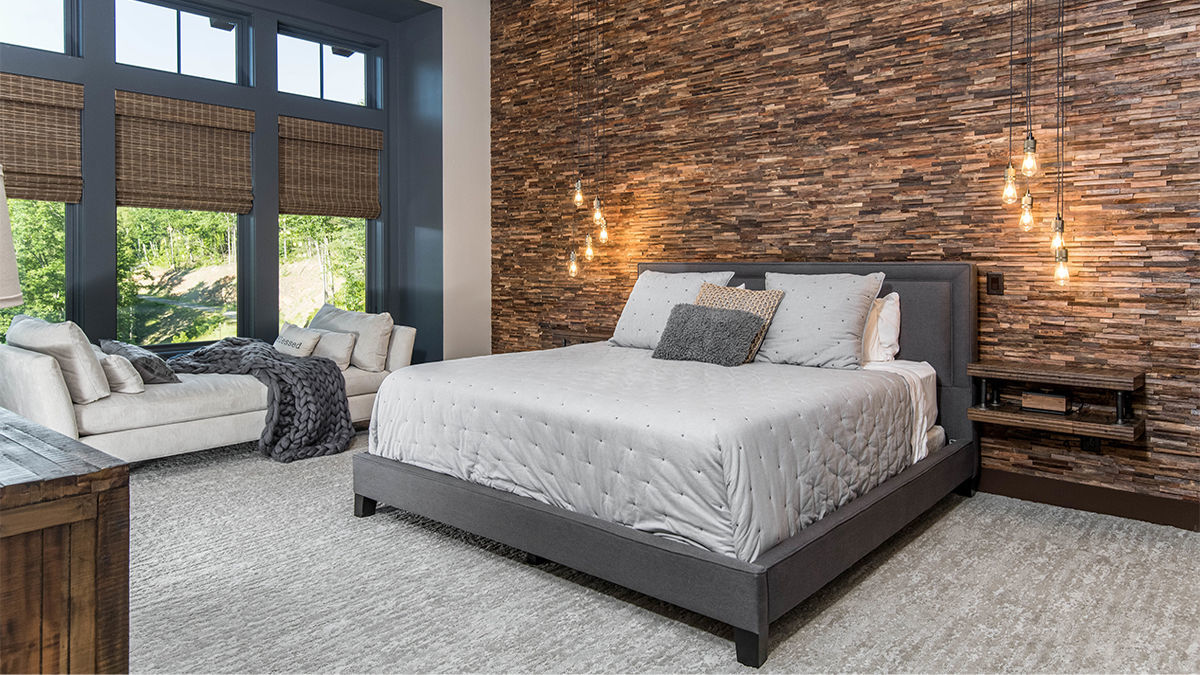 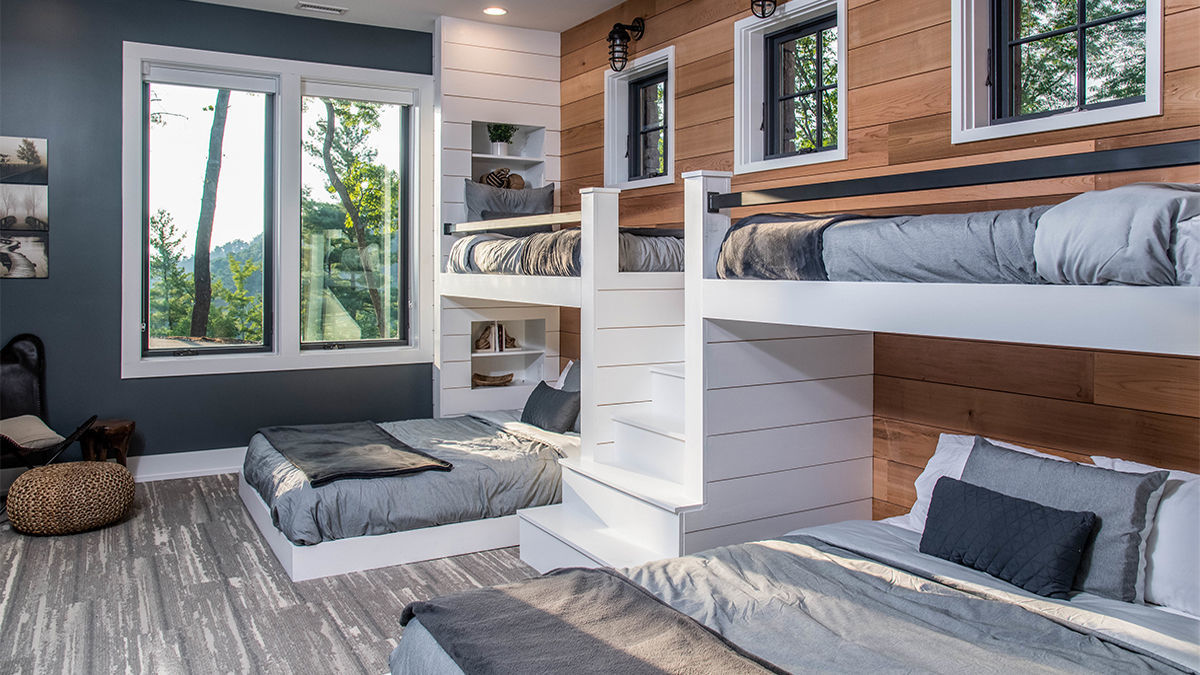 Sean points to a few additional cost-saving measures, including an oversize barn door made of scrap wood. “That style door can be a huge budget-buster for a lot of people, so we had our trim carpenter use leftover siding to make it,” he explains. In the master bedroom, he specced prefabricated sheets of wood from Home Depot—as opposed to the more customary individual pieces of wood—for the accent wall. Blocking placed in the wall during framing allowed for shelves to be installed for a floating effect. In addition to its aesthetic appeal, this option was less expensive than end tables. The homeowners also limited costs with carpeting in the kids’ room and bunks built with scrap wood.

In addition to the home offices with porches, Sean personalized the house by adding a woodworking shop off the carport. On the whole, with significant input from the homeowners, Sean designed a house that functions well for family time, work time, entertaining, and aging in place. Plus, it’s gorgeous.

Watch Mike Guertin in his second of two webinars on roofing details that can withstand extreme weather conditions.