Minimizing Concrete in a Slab-on-Grade Home

Whether your goal is to cut construction costs, minimize environmental impact, or both, there are practical ways to build a home with less concrete.

Synopsis: Builder Mike Maines describes the construction of a code-compliant slab foundation that uses a very minimal amount of concrete. The concrete is limited to the footings and stem walls, and the result is achieved with insulated concrete forms in a frost-protected shallow-foundation approach.

For the last ten years, most of my work has been designing renovations and new homes, and now I am building again as well. But I also sometimes help clients fine-tune the details on homes designed by others.

In early 2017, I was hired to consult on details for a small, high-performance home. Nick, the owner, and his mother, for whom he was building the house, care deeply about our environment and wanted to minimize both embodied carbon and operating carbon, which are similar to embodied energy and operating energy, through the lens of global-warming emissions.

Although exposed, sealed concrete slabs are popular for finished floors in high-performance homes, concrete comes with a large carbon footprint, responsible for 10% of man-made greenhouse gas emissions. Nick and his mom were adamant about having warm-looking, locally sawn white-pine floors. They did not want a basement or a crawlspace, the conventional options in the northeast, because they require extra labor and material to build, and they can be hard to detail so that they remain free of moisture (and resulting mold). Plus, there was ledge (the regional term for bedrock) not far below grade, and we weren’t sure if we could even get code-compliant clearance in a crawlspace. They were committed to the concept of a slab, just not the concrete material.

Nick asked if we really needed concrete under the flooring. Conventional wisdom says yes: I’ve installed and/ or specified wood floors over concrete many times, and while the assemblies can be handled a number of ways, they always include a layer of concrete somewhere. I recalled a project by builder Stephen DeMetrick and architect Steve Baczek including a concrete-free basement floor. They floated two overlapping layers of subfloor over foam and a vapor retarder, without the usual layer of concrete. But that was a basement floor; would the same approach be possible for the main level of a house? After several rounds of discussion and drawing, we devised a system.

First, we still needed a perimeter foundation of some sort. The conventional approach in our region would be a 4-ft. frost wall, but to keep excavation, concrete, and labor to a minimum, and to avoid ledge, we decided to use insulated concrete forms (IcFs) in a frost-protected shallow-foundation (FPSF) approach.

The key to an FPSF in my region (zone 6A) is a foam-insulation frost wing extending out from the foundation below grade, capturing the earth’s heat and preventing the soil around the foundation from freezing. Basic provisions for this system can be found in chapter 4 of the IRc, but for trickier projects it’s better to use the Revised Builders’ guide to Frost Protected Shallow Foundations. It’s important to look beyond the IRc when the subslab R-values are higher than code minimum, as highly insulated floors provide less heat to the earth to help keep frost at bay.

At the frost-wall perimeter, we included a built-in shelf to minimize potential settling of the floor system at the perimeter. If the soil and backfill consolidate well and there is no water running under the building, the shelf may not be necessary, but we included one as insurance. We looked at a few options, and Nick ended up building with IcFs that have a 12-in. core as the base, and then switching to a 6-in.-core IcF at the top, creating a shelf at the foundation interior. The trickiest part was trying to keep the narrower top portion properly supported during the pour.

For the frost wing and subslab foam, we used borate-treated EPS. Some building codes don’t allow EPS below grade, but they are outdated, as higher-density EPS holds up well underground. We used 15-psi Type 2 EPS for the frost wing, and 25-psi Type 9 EPS below the floor.

We also wrapped the sides and bottom of the concrete footings with 25-psi EPS to prevent thermal bridging—concrete is R-0.08 per in., which means it’s a great radiator but a terrible insulator. With a short foundation like ours, in cold weather the soil near the footing will be near freezing, so a lot of heat would be lost to the ground without insulation below the footing. Insulation under footings can make engineers (and builders) nervous, but with the right details and specifications, it can be a safe assembly.

Inside the frost walls, Nick backfilled with gravel, mechanically compacted in 6-in. lifts. Above the gravel is a 6-in.-deep gas-permeable layer of 3/4-in. crushed stone, with 4-in. perforated pipes to mitigate radon.

Above the crushed stone, I spec’d a single layer of 6-in. EPS foam. Some builders prefer to use multiple thinner layers, but because borate-treated EPS is a special order, you can get it in any thickness, and I think a single layer is easier. The key is that the sheets must sit on a very flat surface. Nick used 3/8-in. crushed stone as a screed layer; 3/4-in. stone does not rake flat very easily, and sand would filter through the stone unless a geotextile was installed first. 3/8-in. stone is small enough to screed flat, yet large enough to stay above the 3/4-in. stone.

I designed the system so that the top of the foam would plane out with the top of the frost wall, and a heavy-duty vapor retarder could simply drape over the whole thing before mudsill installation with Simpson Titen HD foundation anchors. J-bolts would also work, but it’s easier to deal with the vapor retarder and to get the mudsill in place without anchor bolts in the way. The vapor retarder then doubles as a handy capillary break, and sealed to the airtight wall sheathing, it helps in keeping air and moisture from entering the assembly. On the exterior of the frost walls, Nick used Sto Corp.’s IcF coating system.

We have a 12-in. double-stud wall filled with dense-packed cellulose, with the outer, structural layer aligned above the frost wall, and the inner layer sitting partly on the mudsill so no extra loading is on the sleepers (though they could handle this type of load if a thicker wall was desired). The 2×4 sleepers are mostly 16 in. on center, except under the baby grand piano and in the bathroom, where Nick changed to 12-in. spacing. Typical interior loads are 40 lb. per sq. ft., plus 5 lb. (at most) for materials, or 10 lb. to 20 lb. per ft. for linear loading at nonbearing walls. Advantech with 3/4-in. pine boards above will do a good job of spreading out any live loads, but even if you put a heavy load directly over a sleeper there would be no noticeable deflection. Twenty-five- psi foam, with a 3:1 safety factor to account for long-term creep, can handle a continuous load of 8.3 lb. per sq. in.; 349 lb. on each linear foot of sleeper. That’s 261 lb. per sq. ft.—more than five times standard design loads. creep in foam is fairly linear with load, so I’d estimate that five times the load capacity results in one-fifth the deflection. With foam at 6 in. thick, that works out to less than 1⁄8 in. of deflection. And that’s for a long-term, sustained load; short-term loading is essentially nil.

A year after completion, Nick says there are no squeaks or settling cracks, and the floor feels good—like a conventional wood floor, not squishy or extra-hard— and most importantly, his mom is happy in the house.

Note: some of the credit for this low-concrete basement has to go to Andy Engel; Mike Maines has pointed out that the concept detailed in the article above has elements inspired by Andy’s Fine Homebuilding article, The No-Mold Finished Basement, except in this case Mike eliminated the slab altogether. 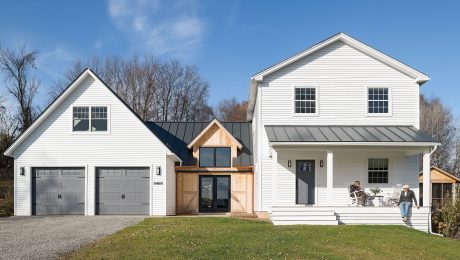 View All
View All Design and Planning Articles
Shop the Store