Get the specifications you need to install stairs, porches, decks, and more to provide a safe, comfortable means of egress that meets building codes.

Every home must have one egress door, and it must be a specific size, with a specifically dimensioned landing on both the interior and exterior side of the threshold. These egress door and landing requirements have been around since before the 1971 One and Two Family Dwelling Code, the first edition of the predecessor to today’s IRC, and remained essentially unaltered for years. But in the 2003 IRC, a change was made. While the egress door still has to follow the strict requirement of having no more than a one-step height difference (73/4 in. max) between exterior landing and threshold, an exception was added for all other exterior doors, which are now allowed up to two steps between the landing and the threshold. To this day, inspectors and builders still stumble on this section of the code, so it’s a topic worth some clarification.

Though homeowners may not know which exterior door is their egress door, they have one, and it must meet some criteria. It must be side-hinged and offer a clear passage of at least 32 in. in width and 78 in. in height. There are more specifics outlined in the code, including from where to take these measurements; generally, the dimensions equate to a standard 3-ft. by 6-ft.-8-in. door. Also, each side of every exterior door (egress and non-egress) is required to have a landing, providing a stable place to stand while one’s attention is focused on operating the door. This landing must be at least the width of the door and 36 in. deep “in the direction of travel” (with an exception for Juliet balconies accessed only by door), and the landing can be sloped for drainage or construction tolerance up to 1/4 in. per ft.

The change in the code provides some much-appreciated design flexibility for non-egress exterior doors. Balcony decks with cantilevered floor joists would place the threshold at the level of the exposed exterior decking if a step were not permitted. The penetration of the cantilevered deck joists through the exterior wall is a difficult and critical flashing juncture—raising the door a step up the wall allows for a well-flashed and drained sill below, along with some much needed detailing space between the door and the deck. I’ve also seen multiple situations in which a house is designed with a taller beam in the rim-joist area of a floor, underneath an exterior wall. When a deck and door is eventually added, the beam would have been quite a tragic discovery if not for the step allowance. Instead, the door is simply installed one step up in the wall, above the beam. According to the code, no raised landing need be built on either side. The understanding is that the door is an “extra” in a private home with greater occupant awareness and minimal expectation of use. The probable hazard is assumed less than the front entry door, which is typically the required egress door.

With all that said, remember this: The code does not guide you to maximum safety; it simply ensures minimum safety. The safest door is still a door with no steps, but only if the weather-resistive integrity from the exterior can be maintained. Whether it’s for yourself or a client, consider the location of each door and the assumed purpose and estimated frequency of use. Then select the right-size door, landing, operation, and steps that offer the most weather-resistive design and safest occupant use within the given budget. After all these wise choices are made, double check them against the minimum code requirements.

The general requirement for the specified egress door is a maximum 1-1/2-in. step from the threshold down to the landing on both sides of the door. However, recognizing the weather-related benefit of space between the door and the exterior landing, an exception allows up to a 7-3/4-in. step down to the exterior, provided the door does not swing to the outside over this dropped landing. There is no requirement for which direction an exterior door on a house must swing, but the direction will affect the allowable landing heights. In all cases, however, a storm or screen door can swing over the exterior steps and landing. 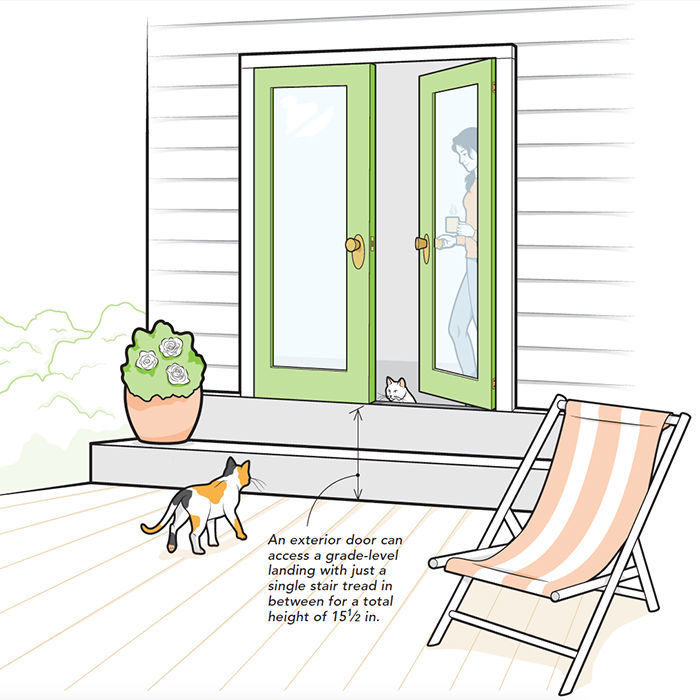 Landing requirements for all other exterior doors 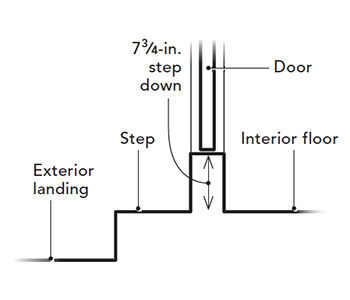 For all non-egress exterior doors, the 2003 code update allows a 7-3/4-in. step down on the interior, and up to two steps down to the landing on the exterior (regardless of which way the door swings, it can only swing over one step). This allowance provides some design flexibility. For example, by allowing two steps up to a total of 15-1/2 in., an exterior door can access a grade-level landing with just a single stair tread in between. This rule also provides the ability to drop the height of a deck ledger for increased weather resistance and ease of fastening to the house, all without requiring the space needed to build a full raised landing. 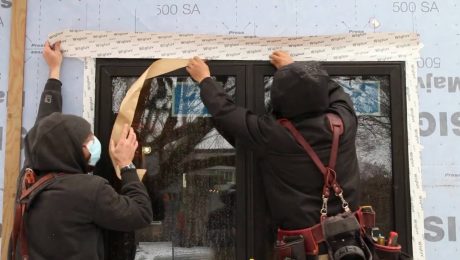 Builder Josh Salinger shows how his crew installs, waterproofs, and air-seals a window in a wall with rainscreen siding details and a self-adhered housewrap.