Structural stability can be a problem when the load-bearing partition is removed.

Synopsis: The saltbox style is inherently efficient, with its high heat-collecting south face and its low north wall, often backed by wind-buffering closets. In some modern incarnations, though, it is also inherently unstable, with structural characteristics that place dangerous outward thrust on bearing walls. Appropriate framing can solve this problem, and result in the best of both worlds—open space within, and the traditional saltbox silhouette outside. This detailed article, originally published in 1981 in Fine Homebuilding Issue #4, includes a sidebar about sizing a beam as well as several illustrations about framing.

Many houses built with energy efficiency and contemporary design in mind just don’t look very homelike to lots of people, so builders are taking a second look at the ability of traditional styles to accommodate alternative technology and a modern, open interior while maintaining the dignity befitting a house. The saltbox is inherently efficient, with its high heat-collecting south face and its low north wall, often backed by wind-buffering closets. In some modern incarnations, though, it is also inherently unstable, with structural characteristics that place dangerous outward thrust on bearing walls. Appropriate framing can solve this problem, and result in the best of both worlds—open space within, and the traditional saltbox silhouette outside.

The saltbox style evolved from the center-chimney Cape Cod, 1-1/2 stories with a peaked roof, which was both simple and symmetrical. The side walls of the traditional Cape are built to equal heights and tied to each other with joists at floor and ceiling levels. Rafters are locked into compression at the roof peak, and the ceiling-level joists neutralize the tendency of the roof load to push the walls out. Above the walls the rafters and joists form triangles, the most solid of shapes, while corner braces (more triangles) give the walls rigidity. A Cape is very stable.

In its pure form, a saltbox is a Cape with a shed addition, which often continues the roof line at its original slope. The original rear wall (A in the drawing) becomes a shared load-bearing partition, and the new roof exerts no outward thrust because shed roofs place their loads equally on both bearing walls (A and B). An old-fashioned saltbox is as stable as the Cape it evolved from.

Today’s saltboxes, though, are usually erected from scratch by builders who want a traditional look outside, but large, open spaces inside—and this can be the source of many structural problems. The saltbox’s exterior walls and rafters by no means form a free-standing arch, and dispensing with the common partition or the joists that tie the rafters together destroys its structural integrity. Under heavy loads, such a building will collapse. If you want a sound, open-plan saltbox, you have to compensate for these missing structural elements.

One way to deal with the outward thrust of the roof is to eliminate rafters and build the entire structure in bents of progressive heights conforming to the shape of the saltbox roofline (drawing, facing page, bottom). No rafter ties are necessary, so the house can be open vertically as well as horizontally— great if you want a cathedral ceiling. Each bent is made up of a purlin (a timber running parallel to the ridge) resting on posts that help form the end walls, which also become the bearing walls. (In a conventional Cape, the front and rear walls are the bearing walls.)

At time of writing, the Hennins were directors of the Shelter Institute in Bath, Maine, an owner-builder school which they founded in 1973. This article originally appeared in Issue #4 in August of 1981. 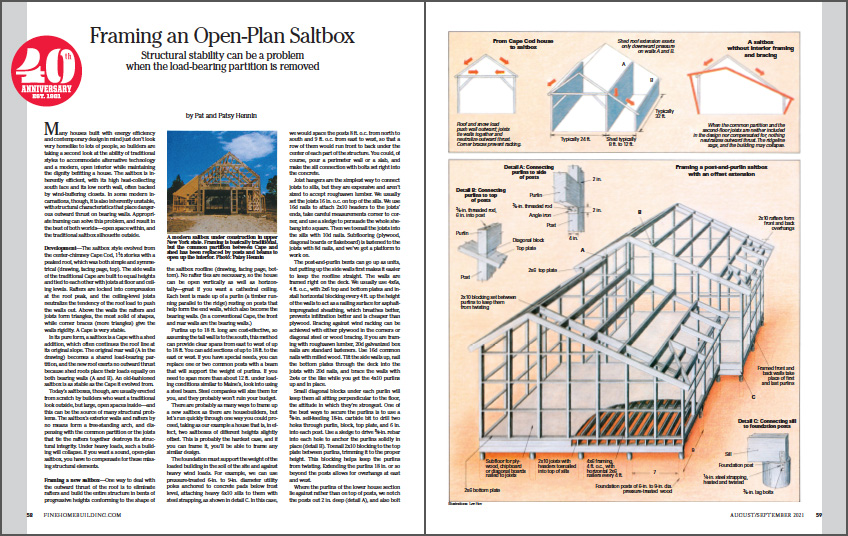