Understanding the forces at work in a house frame is a prerequisite for framing the building.

You can spend years in school to become a structural engineer, but you don’t need that kind of training to build a house. Still, a general working knowledge of the forces at work in a house frame and on a frame can be very helpful. Awareness of those forces and how the frame resists them informs your choice of techniques and makes strict adherence to the building code more natural and intuitive, especially in jurisdictions where enforcement of regulations might be more relaxed.

Forces at Work in a Frame

A house looks as though it were simply resting peacefully as it sits on its lot. But beneath the clapboards and shingles, the frame is hard at work resisting forces. Most of these forces have to do with gravity, and the frame must be engineered in such a way that it handles them easily and efficiently. It also has to be ready for forces that come along only once in a while, such as heavy wind or seismic activity.

Tension and compression The  two forces of tension and compression are the opposite of each other. Tension is a pulling or stretching force, whereas compression is a pushing or squeezing force. For example, in a roof with a nonstructural ridge, the weight of the rafters on the plates acts to spread the walls apart. However, the joists below each rafter keep that from happening by pulling the walls together. The joists are then said to be in tension. At the same time, the weight of the floor system pushing down on the studs tends to squeeze them, putting them in compression.

Shear Shear is a force applied perpendicular or opposite to the normal resistance strength of a structure or material. That force could be wind pushing on the side of a building, but it could also be a lean-to roof pushing against studs in a wall. Another example of shear is the downward force on the end of a cantilevered joist. Shear forces can be some of the most subtle yet most destructive forces.

A house frame transfers the weight of a house to the foundation. Starting at the roof, the loads follow lines of support through the rafters, joists, and wall studs. Loads are transferred efficiently when the framing elements line up with each other. But a house is not a sealed box, and those lines of support are often interrupted by openings for doors and windows. The frame must transfer the loads around those holes. If the framing is not uniform, the loads will be distributed in unpredictable ways, which could cause the structure to fail. 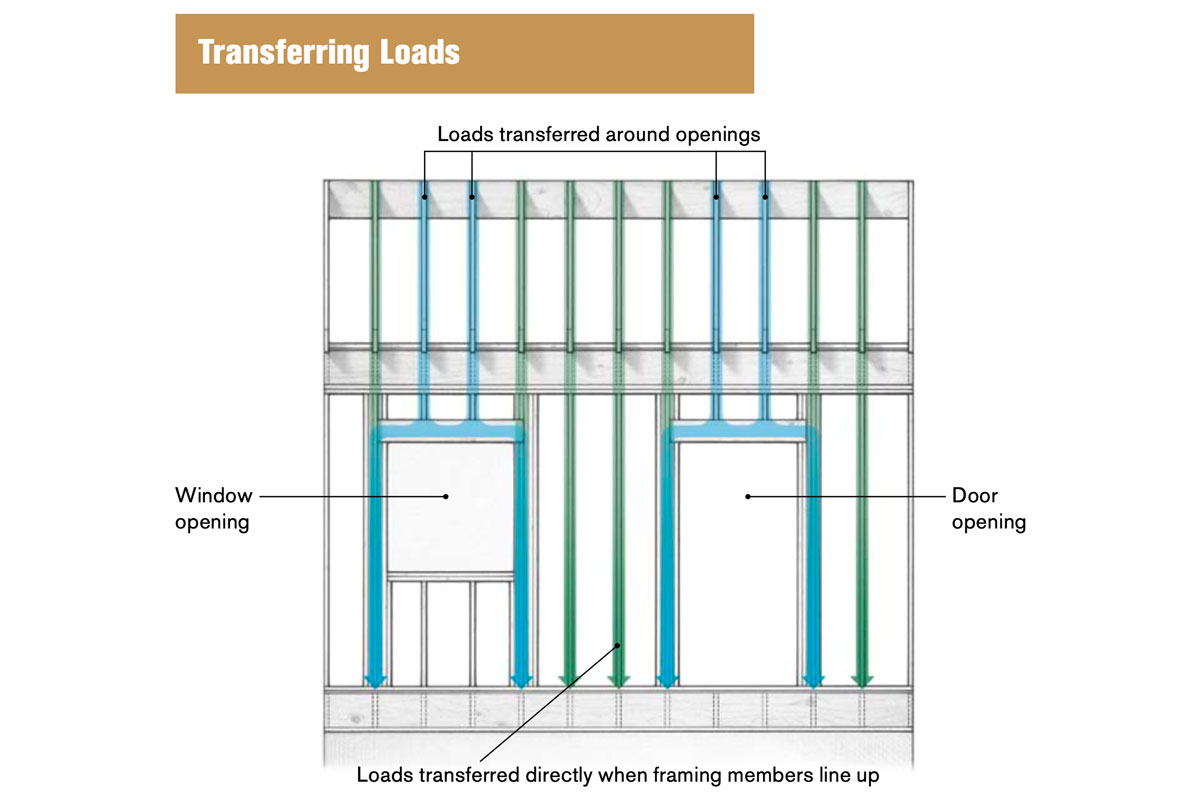 Contrary to what the name implies, a nailing schedule has nothing to do with when you drive nails. Instead it has to do with how many nails and what size nails you must use for a given application. Building codes include general nailing schedules for most framing connections. But if you’re building in an area with special code requirements, such as for high winds, a nailing schedule should be included as part of the house plans. The minimum requirements of a nailing schedule must always be followed exactly to ensure the strength of the connections. These details are especially important in certain applications, such as nailing sheathing to the wall framing (see chapter 4). The size and spacing of the nails must be followed precisely or the house will not meet local code requirements. Building inspectors will flag this error in a heartbeat.

X
X
Previous: Components of a House Frame Next: How it Works: Building Loads