Mike is building himself a large workshop in a town not too far from Burlington, Vt. As he explains in this recent post on the Discussion Forum, the 4500-sq.-ft. stick-framed building will be divided into three bays, allowing Mike to heat only the part of the workshop where he will be working.

The issue is insulation. Vermont has cold winters—Mike has seen the thermometer plunge to 30° below zero.

“I was going to just use fiberglass in the walls,” he writes. “Then I got to thinking after seeing a friend’s place, why not put an extra 1-1/2 in. of foam on the outside. Windows are not in yet, so it would be easy to buck out with a 2×4 on the flat.”

A friend has suggested that with foam on the outside of the building, Mike should put only 3-1/2 in. of fiberglass in the 2×6 framed wall. Why? “He said you want a balance of insulation on each side of the sheathing,” Mike says. “Something about the point where the moisture will condense. I think he put 6 in. of foam on his house, but that is out of my budget.”

What should Mike do at this point? That’s the topic for this Q&A Spotlight.

Insulation should be balanced

“I live in Vermont, too, and depending on whether you live up in the Kingdom or down on the Massachusetts border, the ratio will be different,” Eddo says.

He directs Mike to a presentation on the topic by Martin Holladay, himself a Vermont resident and the former editor of Green Building Advisor. The presentation was at a Better Buildings by Design conference in Burlington in 2019. In it, Holladay discusses the various advantages of putting rigid foam on the exterior of a building, but he also notes that foam must be thick enough to keep the sheathing warm all winter long so it will not get wet from condensation. If the foam is too thin, the sheathing gets cold, and therefore damp, Holladay says.

An accompanying chart recommends various R-values for exterior foam sheathing, depending on climate zone and framing details. In climate zone 6 (Vermont), the minimum R-value of foam should be R-7.5 for a 2×4 wall, and R-11.24 for 2×6 walls.

These building assemblies have been the subject of a great deal of debate. There are situations in which walls with exterior insulation that’s ostensibly too thin don’t run into a lot of problems—but the safest path is to follow the recommendations and stick with the R-11.25 of foam in a 2×6 wall.

That said, Eddo adds that with a building so big, Mike can afford to give up a few more inches of interior space. So, why not consider a double-stud wall insulated with either cellulose or fiberglass. This wall assembly also reduces thermal bridging significantly, and it will be cheaper than foam.

Compare the costs of different approaches

“If I went the foam route, I’d put 2-1/2 in. of extruded polystyrene (XPS), or Gutex (wood-fiber insulation) if I had the money, then fiberglass or Rockwool on the inside wall,” Eddo says. “But my gut says I’d save money by the two-wall solution, fill the 2×6 cavities with fiberglass or Rockwool, add a second 2×4 interior wall and either blow in cellulose or use Rockwool/fiberglass.”

Sterilecuckoo58 recommends that Mike have a look at the ABTG Wall Calculator. It allows the user to plug in various values for a wall assembly—such as cladding, sheathing type, and climate zone—to coordinate energy and building-code compliance.

Cuckoo continues: “You can calculate the temperature of that interface using the respective R-values and indoor and outdoor temperatures. Then pull up a hygrometric chart, and you find your way to the RH [relative humidity], dew point, and so forth.”

In his own case, Cuckoo used 3 in. of EPS (expanded polystyrene) over 2×4 walls insulated with blown-in fiberglass for a retrofit in Connecticut. This assembly did not require an interior vapor retarder. He suggests that a wall assembly including 4 in. of EPS on the outside and 5-1/2 in. of mineral wool in the stud cavities would need only a coat of vapor-retarding paint on the interior to be free of moisture risks.

In searching for rigid foam, Mike finds he could get used 3-1/2 in.-thick EPS  for about $20 per sheet. That would yield an R-12 exterior insulation layer. For the cavity insulation, he used mineral wool in his house but is leaning toward fiberglass in the shop because it’s about half the cost.

“Go for the mineral wool!” says Andy Engel. “It costs more but it’s much easier to install well than fiberglass. I’ve done both and I try hard to avoid fiberglass now.”

The issue, Mike replies, is money. Rockwool for a 2×6 wall costs two and a half times more than fiberglass at Lowe’s, he says, and would add up to almost $5000 more in total costs.

Or, adds Eddo, what about cellulose? Dense-pack cellulose installed by a professional won’t settle or sag. Pros buy cellulose in bulk, he says, and might pass some of those savings on to the consumer.

Our expert weighs in

Since Mike is building a shop and not a house, we have to consider the conditions of use when evaluating the insulation strategy and the risk of condensation in the wall cavities.

The potential for moisture condensation in a wall cavity is driven by moisture in the building. A shop is different than a house. Unless shop activities produce a lot of moisture—such as applying waterborne finishes on a regular basis—or other conditions contribute to high interior moisture levels, the moisture load is minimal—just Mike breathing. This means the formulas for calculating the R-values of exterior continuous insulation to fibrous cavity insulation don’t apply. Those formulas are based on homes with occupants breathing, bathing, cooking, cleaning, and watering plants.

I get the sense that Mike is meticulous with his construction practices, so I’m confident he’s going to do a good job with roofing, siding, and flashing, which should eliminate bulk water as a source. Mike confirmed that he installed a vapor barrier sheet in addition to the 2 in. of foam insulation under the slab, so soil moisture is not a concern. A new concrete slab holds many gallons of water, which would take a season to dry out, but Mike’s slab was placed eight years ago and has had plenty of time to dry.

Since Mike is probably installing the cavity insulation himself, it will only take a little extra time to do a Class 1 installation job with fiberglass. The performance of fiberglass closely matches mineral wool and using it will save $5000.

Scott Gibson is a contributing writer at FHB and Green Building Advisor. Some reader comments have been edited for clarity. Mike Guertin is a Rhode Island builder and an FHB adviser. 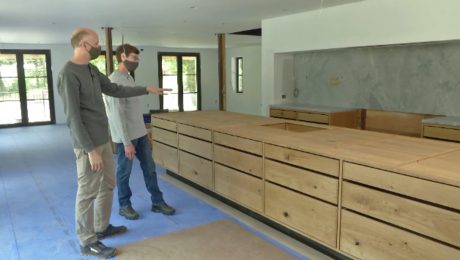 Watch Patrick McCombe and builder Albert Jensen-Moultun discuss changes made to the kitchen and suite bath, as well as floor protection choices as construction wraps up at FHB House CT.