Beth Pointer (she/her) is a general contractor in Baltimore, Md. She runs Done Construction, which specializes in kitchen and bathroom remodels. You can follow Beth on Instagram @doneconstruction or visit the company’s website at doneconstructionllc.com

LMH: How did you get introduced to this line of work?

BP: I went to college and studied English and then I started remodeling houses with a friend. I then became a union iron worker in St. Louis, Mo., and then I was a union organizer for almost 20 years. Four years ago, I started Done Construction with a friend and now we have five employees. 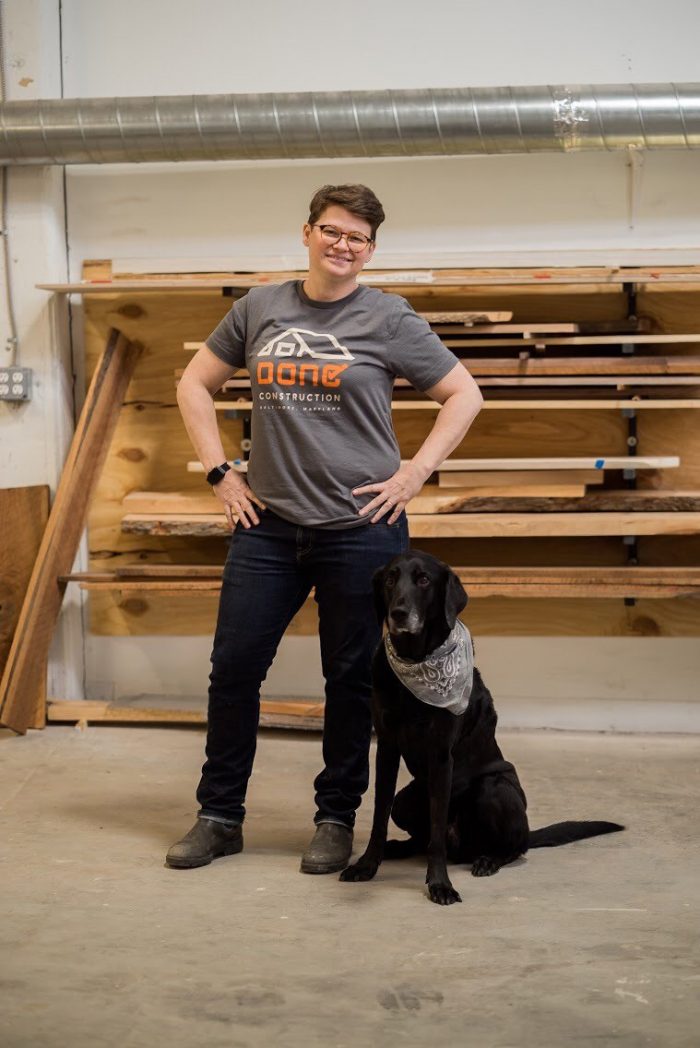 LMH: What made you decide to make the shift into starting your own business?

BP: At the time, I was a bit burnt out. But I was also a volunteer with with the Station North Tool Library and among the other volunteers, a lot of people are doing remodeling projects. In Baltimore, the permitting process is really a headache and so everybody was saying that someone should get their general contractor’s license so we could pull permits and do the the work we were already doing. Coming home from a work trip in Seattle, I boarded the plane, and by the time I got back, I had decided that I wanted to do this. Within a week, we had a company name, a logo, and a website. And within a month, I had my GC license and we were good to go.

LMH: What have been the rewards and challenges of running your own business?

BP: One of the rewards is that I have a found an incredible team of people and we have really nice clients. There’s a real vacancy in the market for contractors who aren’t very conservative white men. In cities, and particularly in this city which is majority Black, people are not comfortable having folks in their house with Sean Hannity playing on the radio. And a lot of clients just wanted to work with women. I have an incredible team of four other women and great subcontractors who like working with women.

The challenge is the business part of construction especially: learning estimating, building a historical database of costs—at the same time that costs are going through the roof and changing so quickly—and staying on top of that to stay profitable. At Done Construction, we don’t have people doing $200,000 kitchen remodels, so we have to balance working for working-class people with being able to make a profit. I thought the challenge was going to be being a woman in the industry, but my challenges are the same challenges that any contractor has right now. 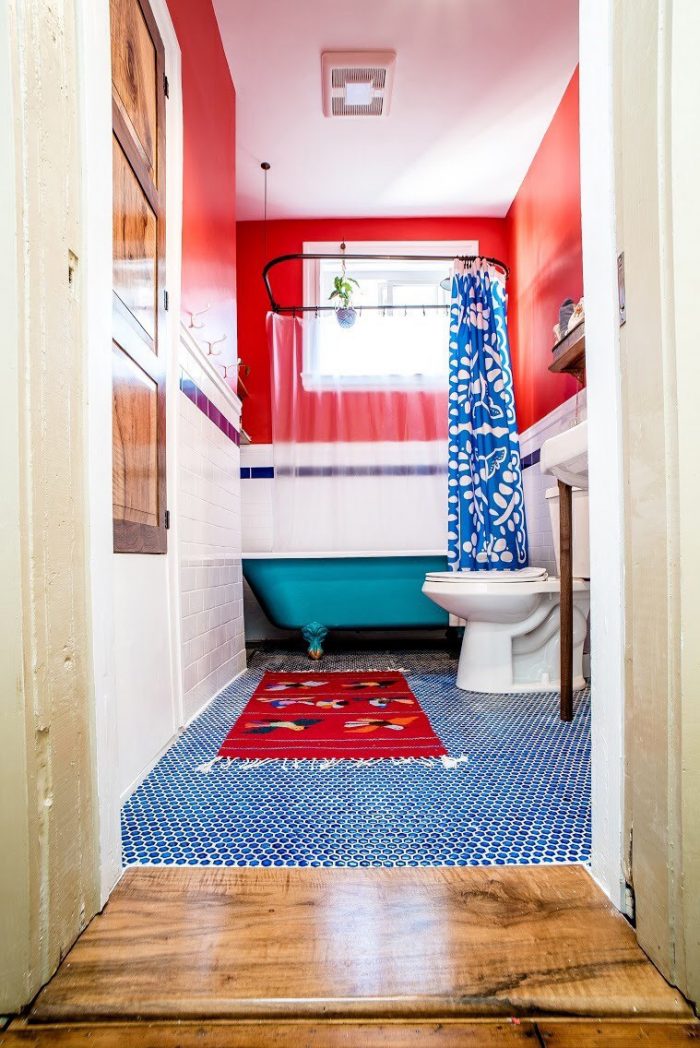 LMH: I know that Baltimore is an older city with aging housing stock. What’s it like working in that city?

BP: Baltimore is an industrial city, but there is an incredible maker community, and the city itself has put a lot of investment into helping small businesses and getting makers access to warehouse space. So we have local makers that we work with and artists who build us things. The home stock is cheaper than every other city on the East Coast, but a lot of houses are old and maybe the renovations that have been done in the past have not been up to code—certainly not up to modern standards. There’s a lot of knob-and-tube electric, a lot of galvanized plumbing, and nothing is square. A majority of the houses we’ve worked in are more than 100 years old, which means there are some interesting puzzles to figure out. But the people who live in Baltimore City want to live here, especially people who are investing in their homes. There are also a lot of people who have moved here from other cities where it is harder for artists to live, so Baltimore is thriving with art. 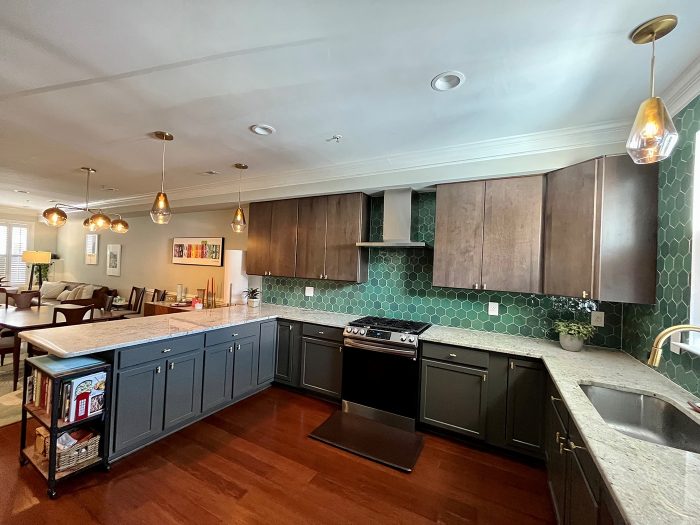 LMH: Your website includes commitments as a company. How did you develop those values and the ethos of your business?

BP: Coming from a labor background, I am not fond of being a boss, and you know, this is our lives, so we want it to be pleasant and we want it to be profitable both financially and also emotionally. Our motto is “home remodeling with intention.” We try to put a lot of intention into everything we do. For example, we ask clients to put together a playlist they would like to play when their kitchen is done so we can get the vibe and bring that to the job, so that energy is in the room from the beginning. It helps deepen the relationship with the client, helps us understand them, and makes them feel really heard. We also have four hours a month of time off for social justice activism in our employee handbook because we want to encourage people to participate in bettering our community. The commitments on the website came from when you’re starting a business and everyone tell you that you should have a mission statement. It feels a little weird in construction because “do construction, make money” is kind of the mission, but when Done Construction was starting, I was coming from the perspective of figuring out how to build a company that I think should exist. Our goal is to be profitable and eventually transition into being a worker co-op.

LMH: How did you get involved with Matriarchy Build and why was that of interest to you?

BP: I’ve done six consultations with Matriarchy Build so far. Co-founder Lacey Soslow reached out to me and I was immediately into it. I love the concept for a variety of reasons. One of the main ones is that it’s a way for other women contractors and tradespeople to connect with each other and to know who is doing what in other cities. For my own self-gratification, I want to be connected to other women in the trades.

The concept of people getting to connect with contractors to talk about their DIY projects is very helpful and can save them a lot of time, money, and frustration. The people I have talked to the most are people who are about to start looking for a contractor—they want to know how long it might take, what the steps will be, how to know how to look for a contractor, how to know they’ve got a good one and how to trust them, what might be in the contract itself, and how to know if the full scope is covered. So somebody can pay me $65 for 30 minutes and save themselves a lot of money and frustration and the pitfalls of signing on with the wrong person. It’s also cool to learn. You could pay $6 for equipment and some for the consultation and you also get the knowledge of how to change an outlet or change a light fixture, which is especially important because so many women are told it’s not for them to know.

A lot of people who want to work with us are men who have felt uncomfortable with men in the trades who have talked down to them or their experiences trying to learn were traumatic in some way. My wife teaches woodworking classes and all of her clients are men and they feel more comfortable learning from a woman. Misogyny is bad for everyone. The patriarchy does no good to any person.

LMH: What do you think we need as a society in order to empower and support women and other people who are not typically found in this industry?

BP: Representation in media and in advertisements. We’re doing work now with a company to help them on their marketing so that they show women in their advertisements and be thoughtful about the way they advertise and the language they use, so they don’t turn off women. Brands can make a lot of money if they target women. What might be considered niche markets have buying power. Once you own tools and know how to use them, you are empowered to do all kinds of things. The influencer-types on Matriarchy Build are also making this work more accessible. It feels like things are changing.