Could this be structurally unsafe?

Just recently had an offer accepted on a home and the inspector said that he didn’t find anything that was bad. However, it looks like in part of the report the columns in the crawl space are not plumb. The house was built in 2008. Also noted on that same side where the columns aren’t plumb the rooms above windows have difficulties opening and one does not open at all. Would this be considered structurally sound? Could the non-plumb columns be causing the windows not to open? Still in due diligence period and wondering if it is best to cancel the contract. 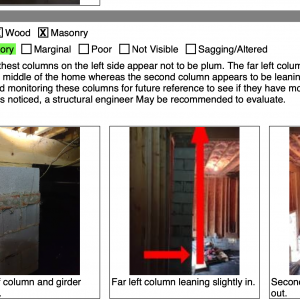