From a Leaky Old House to a Tight New Home

A young couple retrofits the house next door as an investment in deep energy savings.

Synopsis: When Sara and Gareth Ross decided it was time to settle down and raise a family, they rented a house in Amherst, Mass., to give themselves time to look for the right location to build a new house or to renovate an existing one. They fell in love with their neighborhood, however, so when they learned that the house next door was going up for sale, they jumped. Built in the 1880s, the house had suffered from years of neglect. It turned out to be a perfect candidate for a deep-energy retrofit, and because the Rosses were hoping this would be their last home, they weren’t interested in cutting corners on long-term energy performance. Because they ultimately wanted to install a photovoltaic system, they decided to go with an all-electric energy solution. After further investigation, the Rosses decided that the incentives in Massachusetts for solar were too good to pass up, so they didn’t wait on the PV system. Now their 3270-sq.-ft. home produces more energy than it consumes. The Rosses also wanted a comfortable home for their family and for entertaining guests. They opened up the downstairs and replaced load-bearing walls with engineered-lumber beams. Upstairs is a master suite and two bedrooms and a bath for the kids. The third floor, which before the renovation had been a cold attic, now contains a study and a guest bedroom. A sidebar shows how Andrew Webster, designer of the renovation and author of this article, detailed the new air barrier. Another sidebar lists some lessons he learned from this project. For designing this gut rehab that opened up a choppy floor plan and created a super-efficient house, Webster won FHB’s remodel-of-the-year award for 2012.

Location was the most important criterion

While they searched for the right plot of land or a perfect rehab opportunity, Sara and Gareth rented a three-bedroom house in town. It was within walking distance of everything: a bakery that saved the Financial Times for Gareth every morning, a school with swings for kids, and a string of restaurants, bars, and coffee shops. They fell in love with the neighborhood. When they heard that the house next door was going up for sale, they eagerly made an offer, completed the sale, and became quickly and firmly committed to an extensive renovation project.

Built in the 1880s, the house had suffered years of deferred maintenance: The roof was failing, the chimney needed work, most of the exterior was covered in asbestos siding, the walls were barely insulated, and the furnace was 40 years old. In other words, it was the perfect candidate for a deep-energy retrofit.

The interior spaces were not much better. Small rooms on the main floor provided lots of privacy, but these areas were begging for openness. This is a common problem when updating an old house. For example, kitchens used to be tucked away in the back, but now folks use them as a central hub for family time and entertaining.

Form that follows function for a long time

Both trained in finance, Sara and Gareth were interested in energy savings and long-term planning. They hoped this would be the last home that they lived in. They considered this house part of their retirement portfolio, so they had no intention of cutting corners on long-term energy performance to achieve short-term savings.

The Rosses also wanted a comfortable space for a growing family and room for entertaining. Because most of family life would happen downstairs, priority was given to the shared spaces. Aesthetically, they were drawn to symmetry, pale whites, and a modernist style, but they also wanted their home to be approachable, usable, and welcoming.

On the first floor, an open plan links the kitchen, dining area, and living room. The original structure is plain to see, now expressed as deep engineered-lumber beams where load-bearing walls once stood. Sara and Gareth can cook, entertain, listen to music, and keep an eye on the kids playing outside from one central spot. The kitchen connects to the entry hall, a half-bath, the pantry, and the laundry, and it has direct access to the raised patio overlooking the side yard.

Upstairs, we created a parents’ suite. This simple suite contains just a quiet bathroom and a small walk-in closet. The bedroom and reading nook are made up of all the leftover spaces. The rest of the second floor is devoted to the kids: two bedrooms with generous light and a playful bathroom designed with bathing children in mind. Under the stairs sit a cat door and a private nook for a cat box. We found space for a home office against a gable end on the third floor where Gareth can squeeze in a few productive hours late at night and early in the morning before heading to the office. Sara, on the other hand, needed a “constellation of shared spaces” to help her manage home and work: a desk in the kitchen, a chair in the bedroom, and a serene room that doubles as guest quarters under the other third-floor gable.

The interior finishes are not complex. Sara found ash she liked at a local lumberyard, and we used it for floors, stairs, windowsills, and trim. We used slate for countertops in the bathrooms, kitchen, and pantry. We left the engineered beams exposed for their modern look and painted the walls mostly white, with splashes of color.

Opening a closed- in kitchen

The blue wall had to go—partly because it was blue, and partly because it was a wall. Opening this main floor plan meant that parents could cook, keep an eye on kids, and entertain guests comfortably—sometimes simultaneously. Upstairs, 1000 sq. ft. was harvested from the attic and by reconfiguring existing stairways.

An all-electric house that works without electricity

While solar power was on the long-term wish list, Sara and Gareth weren’t committed to it in this first round of work because it is so expensive. The building’s perfect orientation for solar power, however, prompted us to consider an all electric solution for the house. This would make it easy to add photovoltaic panels later. The options for electric-based heating systems are few: electric strip heaters or heat pumps. While the heat pumps of the 1980s had given this technology a bad rap, cold-climate air-source heat pumps are promising. After making inroads into the United States after being perfected in Europe and Japan, these units provide heating and cooling in one efficient little package. We decided on a multiport unit by Mitsubishi with five zones. It would maintain operation to –15°F and perform with a coefficient of performance (COP) of 3 or better. That means that for each kilowatt hour of electricity we put into it, the heat pump would deliver 3kwh of heat to the house.

Perhaps the more difficult decision was in the kitchen, where all electric meant induction cooking. Giving up gas cooking was a tough sell for these two cooks, but they were surprised by how much they loved the induction cooktop. For the kitchen floor and also for the parents’ bath, we chose tile warmers for a quick pickup to warm a cool house after a weekend away, or to ensure warmth should the heat pump go down during an extended cold snap.

In fall 2011, the house had a real test of its energy-saving powers: A Halloween storm dropped more than a foot of snow on the area, and the power was out for two and a half days. When electricity was finally restored, the temperature inside the house, which had been without any heat for the duration, had dropped from 70°F to 67°F— not bad for three wintry days with no heat and a lot of foot traffic.

Airtight retrofits can be difficult to achieve, especially on an old balloon-framed house. The author provides a color-coded construction detail illustrating the air barrier through all the critical connections from footing to ridge. The dotted red line on this drawing represents the primary air barrier. Also specified are taped joints, dabs of construction adhesive, and canned foam. Additionally, air tightness goals are listed clearly on the plans: 414cfm at 50 Pa. The result? Success.

The solar panels themselves were nearly the last thing decided. Knowing that solar was possible in the future, we’d cleared the south-facing roof plane of all penetrations. The roofing material was standing seam metal, with easy attachment for solar clips. Framing was under way, the roof was being rebuilt, and the plan was proceeding without solar power. Gareth had been thinking through the finances of photovoltaics (PV) and had discovered what we already knew: In Massachusetts, the incentives were good. Given the state grants, tax incentives, and Solar Renewable Energy Certificates (SERCs) now on offer, Gareth could see his way to an attractive financial return. Rather than being a drain on their finances or a luxury item for the bottom of their wish list, the Rosses realized that an investment in solar made strong financial sense—especially given the lack of other investment opportunities in a rocky economic climate.

“I’ve been driving back and forth to work for the last month, trying to find the flaw in my own thinking,” Gareth said. “But I can’t. I think we should put as much solar up on the roof as we can fit.” Within three months, the system was installed using the densest residential solar module on the market, for a total of 12.4kw of clean power generation. It covers the entire southern roof plane.

To install the PV system, the Rosses had to write a painfully large check. In fact, it was larger than the check they wrote to buy the house itself. For most homeowners, this upfront cost is an insurmountable hurdle to solar ownership. A desire to solve this problem for other homeowners led them to start a business, Sungage (www.sungagellc.com), which determines the feasibility of solar power for a home, provides the loan, and smooths the installation process.

The house that was remodeled to save energy now actually produces it. While earning a great return on the money the Rosses invested in it, the PV system makes all the energy the house requires—with some to share. In 2011, the house overproduced by more than 1000kwh. Through careful planning of static and dynamic elements, a supportive climate for PV, and some clever financial thinking, we’d converted a home in need of attention into a renewable-energy powerhouse with a modern skin.

Andrew Webster is a designer and project manager for Coldham & Hartman Architects in Amherst, Mass. 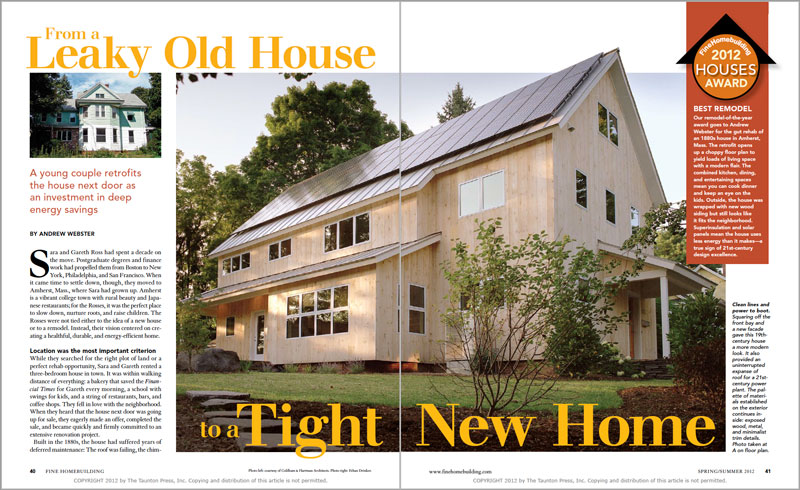 Photos by Charles Miller, except where noted.

For more details, photos, and information on traditional siding and trim, click the View PDF button below.

View PDF
Previous: Net-Zero Design for Aging in Place Next: Sustainable Home in the Mountains of Colorado