FHB House is energy-smart, connected, healthy and durable. It's small and sensible. Most of all, it’s the industry's most powerful home for educating designers and builders who aspire to create high-performance houses that are exceptional in their quality, comfort and style.

In 1970, Cor-A-Vent Inc. began in the garage of founder Gary L. Sells, an Indiana custom home builder who, in a spark of inspiration, created an entire industry. The first-ever shingle-over ridge vent by Cor-A-Vent transformed the roofing community and led to a wave of imitators.

Since then, Cor-A-Vent has expanded its product line to include other forms of ventilation for the rooftop, but also below the roof level. The Cor-A-Vent Siding Vent System was the first commercially-produced rain screen ventilation system on the market, initially constructed in the field from pieces of our original ridge vent. 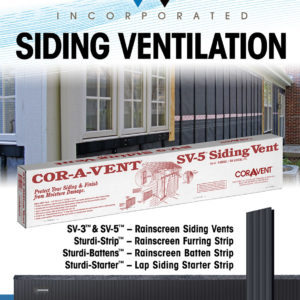 A rain screen is a wall drainage and ventilation system that creates a space between the exterior cladding and your home’s moisture barrier. A rain screen system prevents moisture – whether it’s driven through from the outside, or migrates out from the inside – from becoming trapped between the siding and wall sheathing, causing damage.

The Siding Vent System has been in the marketplace since 2000. The first part of the system is the heavy-duty Sturdi-Strip furring strips, which hold the siding away from the wall, creating the necessary capillary break (3/8” or 10mm) that will allow moisture to drain out instead of becoming trapped. This can also be achieved with wood or metal furring strips.

Our Siding Vent products – either the 7/16” thick SV-3, or the ¾” thick SV-5 – at the top and bottom of the walls will let that moisture drain out and allow fresh air to pass through, keeping the system dry, all while keeping insects out. When ¾” thick strapping is called for (ex: 1×3 treated lumber over rigid exterior foam insulation), the SV-5 should be used. Sturdi-Strips can also be doubled up to achieve a ¾” thickness.