One mason's approach to framing, layout, and bricklaying technique.

Synopsis: This is not only a description of how a fireplace is built, but a guide to making sure that framing and other building components give a mason enough room to do his job. Clear illustrations give shape and proportion to the firebox, smoke chamber, and other components. With article in hand, an enterprising novice could build one.

I have been involved in building as a designer and carpenter for over 30 years, but building a fireplace has always been a mystery to me. I recently had the chance to clear up the mystery by observing, photographing, and talking to my mason friend, John Hilley, as he built three fireplaces. I now understand more clearly than before what I should do as a carpenter and designer to prepare a job for the mason. I also know I can build a fireplace.

The job actually begins at ground level, with a footing. A block chimney base carries the hearth slab, upon which the firebox and its smoke chamber are built. The chimney goes up from there.

The importance of framing

As a carpenter, I’ve had to reframe for the mason too many times. This is usually because the architect or designer didn’t realize how much space a fireplace and its chimney can take up, and how this can affect the framing around and above it. We’ll be talking about a fireplace built against a wall, which is a pretty simple arrangement, but planning is still important.

Most parts of the country have building codes that specify certain framing details. In Massachusetts, where I live, code requires that all framing members around the fireplace and chimney be doubled, with 2 in. of airspace between the framing and the outside face of the masonry enclosing the flue.

The modified Rumford fireplaces that Hilley usually builds are my favorites because they don’t smoke, they heat the room about as well as a fireplace can, and they look good. The firebox is 36 in. wide by 36 in. high, and the two front walls, or pilasters (returns) are 12 in. wide, for a total masonry width of 60 in. From the fourth course above the hearth, the rear wall of the firebox curves gently toward the throat. It’s harder to lay up than a straight wall, but I think it looks a lot better. The back hearth is 20 in. deep and about 18 in. wide at the back—not in line with Count Rumford’s proportions, but the minimum allowed by the Massachusetts code.

To figure the full masonry depth, you have to add to the 20-in. back hearth 4 in. for the back-wall thickness, 4 in. for the concrete-block smoke-chamber bearing wall, and 4 in. for the concrete-block substructure wall, for a total of 32 in. Thirty-six inches is better, because it gives extra space for rubble fill between the back wall and the block. Using these dimensions, the chimney base is 36 in. by 60 in. Add a front hearth depth of 24 in. (16 in. is minimum), and clearance of 2 in. on each side and rear, and you get a total floor opening that’s 64 in. wide by 62 in. deep. In situations like this one, where the fireplace is on a flat wall and the chimney runs straight up, with no angles, the framing is simple—double the framing around the openings and leave 2 in. of clearance around the masonry. 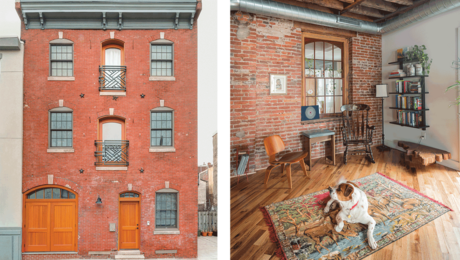 Deep-Energy Retrofit for an Adaptive-Reuse Project

A historical commercial building is turned into a live-work space using building-science principles.

View All
View All Fireplaces and Chimneys Articles
Shop the Store