Great moments in building history: Even if you think of everything, there's probably something you've forgotten

It seemed as if it had been raining forever. But this weather was typical of springtime in Oregon, and I knew that eventually the clouds would break to remind me that there was still a sun in the sky. I was lucky to be working indoors on a sunroom addition and kitchen remodel rather than being out in the rain. The homeowners both worked, which left me free to work without distractions—that is, except for their cat, Tasha, who loved to come into the work area to stretch out in the rare patches of sunlight. Like most cats, Tasha loved the attention of someone willing to scratch her head. When I was on the stepladder, she would climb up to get more attention, and I would oblige by giving her a couple of quick pets and then take her down the ladder. When the sun disappeared behind the clouds, she would wander off to find a warmer spot to curl up for a nap.

While I was installing the new kitchen counters, Tasha would jump on the counter to watch the progress. I made sure that when I was applying the contact adhesive that Tasha was safely locked in another room. After installing the laminate, I made the cutout for the sink, and when things were safe, I let Tasha come into the room. I was winding up an electrical cord when I heard a thud followed by a meow. Tasha had jumped on the counter and fallen through the sink cutout into the cabinet below. Tasha was okay but surprised by what had happened. Several days later, the clients complimented me on getting Tasha to stay off the counters; I replied, “Cat training is included in the bid.” The next phase of the work was insulating around the skylight jambs with aerosol polyurethane foam. Having previously worked with canned insulation, I knew how messy things could get. On a previous job, I failed to take proper precautions and ended up with foam glued to every surface that it touched (including my hands) and required paint thinner to remove.

On this project, I decided to take every precaution necessary to protect the finishes under and around the skylights. I spread plastic sheeting on the sunroom floor, knowing that some of the foam would invariably expand and drop from the ceiling. I wore a long-sleeve shirt and rubber gloves, and I made sure that I had on my safety glasses. With the straw of the polyurethane foam inserted into the gap between the overhead skylight frame and the blocking, I began to fill the void with canned insulation. As I expected, the foam expanded in the void, and some of it fell, missing me and landing on the plastic sheeting. I was feeling good about taking every precaution. Just then, the sun shone through the clouds, and through the glare, I saw more foam falling toward me. Thankfully, it again missed me, but I was horrified when I looked down and saw that it had landed on Tasha, who was stretched out on top of another stepladder. I had forgotten to lock her out of the room.

Tasha sped down the ladder and across the room, leaving globs of still-expanding foam everywhere. She shot into the family room, leaving a trail on the Persian carpet, and jumped onto the back of the sofa. I approached her cautiously, not knowing what to expect from a cat with sticky foam glued to her side. She let me pick her up, and I was searching my thoughts for a first-aid solution when the client walked in and said, “What have you done to my cat?” A solvent bath was out of the question; the only option was to cut away the hair glued by the foam. Tasha lay there while all the mess was cut off, and then she was taken to the vet, who reassured us that only Tasha’s pride was wounded.

I was able to clean up the stray foam to the clients’ satisfaction, but I had to endure their devastated looks when they held Tasha. I finished the project and didn’t ask for a recommendation. However, several months later, they called me back for remodeling in another portion of their house. Tasha’s fur had grown out, and she welcomed me as if nothing had happened. She still came by to watch me work and to stretch out in the sun, but whenever I brought out my stepladder, she quickly left the room.

My experience with Tasha and the foam reminded me of an important lesson: Even if you think of everything, there’s probably something you’ve forgotten. 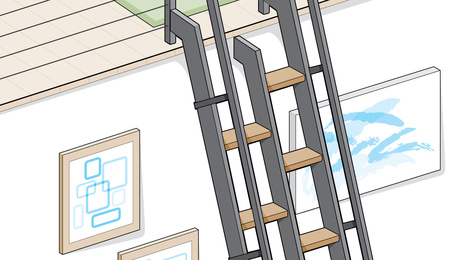