One day, we smelled something funny in the bathroom. Dead critter under the house? Mushroom farm? My husband, Saul, went underneath to look and found dry rot, the kind you get from old plumbing that was not so well done in the first place. The shower had leaked into the wall through the valve cover, and suddenly, it was time to remodel the bathroom. OK, it wasn’t really necessary to remodel the whole room—just the tub and tile surround would do for now. At least we would repair the framing and make sure the plumbing didn’t leak again.

Like the smart architect I am, I hired a general contractor. Then I went out with Saul to select tile. But this story is not about marriage counseling; it’s about my cat.

In short order (I hired a good contractor), the tub was removed, the tile was demolished, and the drywall was taken down to the studs so that the builder could find and repair the water damage. After all the wood was made good, he replaced the tub and redid the framing of the apron, installing the greenboard so that it would be ready for the tilesetters in the morning.

That night, my 20-lb. cat, Gandalf the Grey, didn’t show up for dinner. “Oh, he’s just annoyed that his bathroom is being disrupted,” I thought. “He’ll show up in the morning.” Well, he didn’t, and I was getting worried. This cat does not miss meals. And he doesn’t poke around in strange holes, either. When he isn’t waiting in front of his food bowl, he can usually be found acting as my office manager in charge of rubber bands and pencils, making sure they hit the floor with regularity.

Gandalf is also a dog in cat’s clothing. He comes when he’s called, sits at my feet, and does not meow. Not the most likely candidate for a disappearing act. So I sat down at the computer and printed out a bunch of missing-cat notices, but thought I’d give him one more evening before I posted them.

That evening, I heard a very faint meow. I looked all over, but no cat. Maybe he was out in the side yard? It was getting late, and it can be hard to find a gray cat in the dark. I looked all over the side yard, but no cat. I came back in. I heard him meow again. OK, this cat was really here somewhere. Maybe he got under the house? I grabbed a flashlight, pulled aside the crawlspace cover, called the cat, shone the flashlight around, poked my head underneath, but no cat.

Finally, it was time to go to bed. I put on my pajamas and went into the bathroom to brush my teeth. (The sink was not part of the remodel—not this time, not yet. Remember the part about the marriage counseling?) This time, the meow sounded like it was right under the bathtub, so I got the flashlight again and crawled under the house in my pajamas, maneuvering my middle-aged body around drain lines, rusty nails, and various structural supports.  “Poor cat,” I thought, “maybe he’s injured and can’t crawl out.” I made my way to the area under the tub, where I thought I’d heard him, but no cat. Then another meow! I looked up, and there, in the floorboards, was his little furry face. He was trapped between the wall and the bathtub.

Poor cat, indeed! No food and no water for two days now. Saul went down there with his little Sawzall, but we were both nervous about cutting away too much wood because we had no way to support the tub for the night. We poked a tiny cup of water up through the hole in the floorboards and wished Gandalf pleasant dreams.

I called David, the contractor, first thing in the morning and left a message that there was an emergency. I left another message 15 minutes later. When David called and asked what the emergency was, I described the cat behind the tub. David laughed his head off, but he had someone out in less than half an hour and freed my cat. I now have a new set of instructions for pet-owning clients who remodel bathrooms. 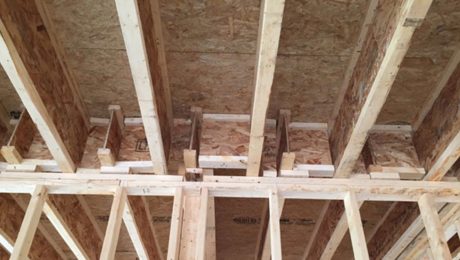