Festool is known for highly engineered, no-compromise power tools, and the hefty price tags that go with them. A Festool product is not an impulse buy. I scrutinize every detail on each new tool from this company before I spend my money, and the Kapex 10-in. sliding compound-miter saw had plenty to pore over.

The saw base is made of a magnesium alloy, and the underside is configured in a honeycomb pattern to create a light, strong foundation. The cutting table was large enough to fit 65⁄8-in. crown molding in the nested position, and the fences worked smoothly.

Instead of the typical sliding miter-saw design where the entire rail assembly moves forward and back, the Kapex has fixed rails, and the head slides forward to make cuts. This design allows the saw to be placed closer to the wall. The widely spaced rails combined with a handle centered above the sawblade help to stabilize the whole assembly and to keep things in line when making long sliding cuts.

With safety in mind, Festool engineered the Kapex so that you can’t lower the saw’s head or retract the blade guard unless the trigger is pulled. I thought I would have to abandon my deeply ingrained habit of lowering the sawblade to a marked line before making a cut. I quickly learned, however, that the blade didn’t activate simply by pulling the trigger; I also had to push a second safety button with my thumb. I could just pull the trigger and lower the saw to the cutline without activating the motor, but the lasers on the Kapex are accurate enough in just about every cutting position to align a cut without lowering the blade to the workpiece.

Like other Festool models, the Kapex has an electronically controlled motor that maintains constant speed under load. It wasn’t a particularly noisy tool, but the motor had an annoying whine.

Superior dust collection is another thing Festool is known for, and the Kapex literature claims that the dust shroud and integrated port capture 91% of sawdust when connected to a Festool vacuum. I didn’t verify this claim scientifically, but the saw definitely collected more dust than any other sliding miter saw I’ve used.

The 60-tooth blade cut well, but I was disappointed to find that it had a 30-mm arbor hole, which is larger than the standard 5⁄8-in. hole on conventional sawblades and made my collection of favorite 10-in. blades incompatible with this saw.

Miter adjustments were smooth, and I had no trouble locking the table in position anywhere along the scale, even right next to a detent. But Festool’s engineering truly shone on this tool’s bevel function. A knob on the end of the right-hand rail engaged a gear-drive mechanism, enabling me to dial in precise bevels without supporting the weight of the saw head. The bevel scale is also much larger, so there was less guesswork involved in setting a specific cutting angle. The bevel system has no detents, and it locks down securely with a flip lever on the rear of the saw.

The Kapex also includes an angle finder, which worked well for determining the bisecting angle for miter cuts. The angle finder stores securely in the lower-left side of the saw’s base and is a nice bonus from a company that typically charges a la carte for its accessories. Extension tables and crown-molding stops are also available at an additional cost, and worked well in my tests.

Bottom line, this 10-in. saw costs more than twice as much as the highest-priced 12-in. sliding compound-miter saw on the market (FHB #194). But if your work requires an accurate miter saw, it is worth the price. In this extremely competitive tool category, the Kapex is certainly going to be the saw to beat. 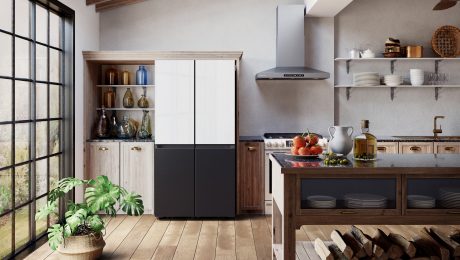 Refrigerators Can Look Good, Too

Bespoke refrigerators from Samsung cater to your design aesthetic with flexible colors and combinations.