My Story As Told By Houses — Part 3: The Old Frame House

Behind where my wife and I live near the beautiful Oregon coast, there is a new house, some say a starter castle, that has five fireplaces and seven bathrooms. One granddaughter says it looks bigger than her middle school. I understand it has adequate rooms and sufficient space for the couple and their dog. Increasingly, we live in a society that builds big houses and fills them with more and more. Does this leave us, our children, and our earth with less and less? Is this sustainable? Is this what life is about? Please let me know. 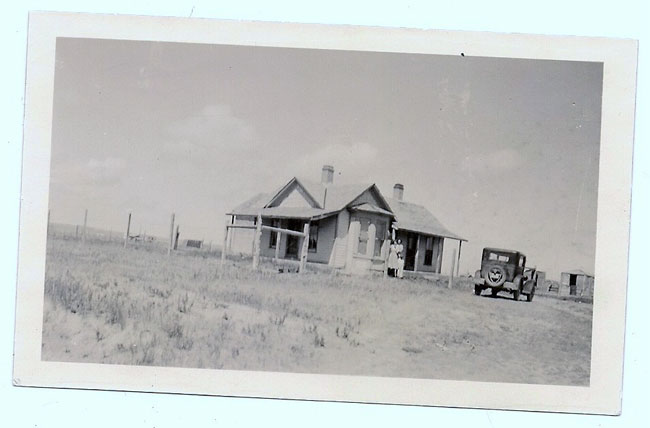 I was born in a wood-frame house with less than 1000 square feet of floor space in the small town of Harrisburg, Neb., (pop. 85). As Barbara Kingsolver says, it was right close “to the center of the middle of nowhere.” The nearest doctor was 30 miles away, so a midwife caught me as I came into life from my mother.

The town was populated by many more chickens than people. My mother told me that she was happy I was born in May, the time when the meadowlarks perch on the fence posts and sing their beautiful courting song. This was her signal that the long, often bitter, winter was finally coming to an end. Blessed are the meadowlarks, for they bring sunshine!

In 1930, my parents bought this house, built in the 1890s, for $900 with money borrowed from the Kimball County Bank. The house came with about four acres of land and several small, deteriorating outbuildings. There were few trees on the property or in the town, other than the Russian olive, which some say is more of a weed than a tree. What was most valuable was that the house came with a good well powered by a Dempster windmill. 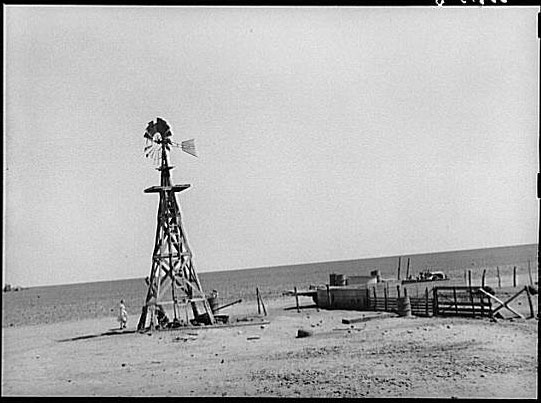 The water below this town was not an easily tapped reservoir. Rather, it flowed in underground streams that even a water witcher could not always locate.

The construction of this house was much like that of one of the first houses I helped frame in 1950 in Los Angeles. A 2×6 sill was placed directly on the foundation to support the 2×6 floor joists. No foundation bolts were used to hold it securely in place. Our floor was bouncy because the floor joists were undersized for the distance they spanned. This was true also of the 2×4 ceiling joists, which caused the plastered ceiling to sag like a swaybacked horse. Thankfully, we really don’t build them like we used to.

The joists in our home were nailed in place 16 in. on center with machine-made, rectangular-shaped, cut nails using a 16 oz., curved-claw hammer like the one I had as a child. The floor was then sheathed with 1×12 pine boards that I could see from down in the cellar. These boards were placed diagonally across the floor to help strengthen the frame. All the wood members had to be cut by a handsaw. Sheathing diagonally meant that both ends of every board had to be cut at a 45-degree angle to fit on the joists — lots of sawing for apprentice carpenters. Once the house was framed and finished, the floor was covered with straight-grained, tongue-and-groove, 1×4-in., Douglas-fir boards. Most likely, this beautiful flooring material had made the long journey to western Nebraska from the Oregon coast.

Once the floor sheathing was down and nailed to the joists, the walls were built one stick at a time. The wall-framing method was called “balloon framing”. This means that the wall studs did not go to a bottom plate set on the floor like we do now in platform framing. The bottoms of the studs were nailed down on the sill plate, one stud alongside each floor joist. No production framing here. A top plate was marked for stud location at 16 in. on center. Window and door location were also marked. Window headers were most often 2x4s laid flat. This worked fine unless the opening was large. The roof load, especially when weighed down with wet snow, caused a long header to sag in the middle. Next came corner studs that were nailed in place one at each corner. They were braced plumb (straight up and down), and a string was pulled across the post tops.

The walls were then braced to stay plumb by cutting 2×4 blocks from top plates to the bottom at a 45-degree angle and nailing these blocks between the studs. This is a good, solid, bracing system as long as a wall has two braces running diagonally in opposition to each other. The problem is that the blocks had to be cut on the angle with a handsaw, which took considerable time and effort. But then, maybe those carpenters were in less of a rush than we modern people. (“Time doesn’t fly by for us. It stays. We are the ones to go.” — Austin Dobson, 1877)

The tools in 1900 were pretty much the same as those I used in the 1930s and even in 1950. The ever-present framing square was the tool of choice to lay out rafters for the roof. The pitch or slope on our old house must have been about 4 in 12. This means that for every foot that a rafter moved toward the center of the house, it rose 4 in. giving the roof a slope. Every rafter was laid out with a framing square, cut to length on the ground, and then nailed in place on top of the walls alongside each ceiling joist and to the ridge board at the peak. The rafters were then sheathed with 1×12 in. boards and covered with tar paper.

The outside of our old house was covered with tar paper, which at least slowed the wind-driven snow down a bit. The walls had zero insulation. Double-hung windows set in wood frames were universally used in most every house. Double hung means that both window frames (sashes) were vertically movable. The trouble was that the sashes were not weatherstripped. Because the sashes fit rather loosely in the frames, wind whistled in around the edges.

Each year before winter set in, Mother gave us children strips of cloth and table knives. We were directed to stuff the cloth all the way around each window to close the gap between the sash and the frame. Heavy, thick frost would build up on the single panes, leaving puddles on the sill and floor when it finally melted. I used to push pennies against the frost and leave imprints of Abraham Lincoln in the ice. Even though we had few playthings, I don’t recall feeling bored. Maybe boredom is a modern affliction.

The absence of insulation meant that the temperature on the inside of the house was pretty much the temperature outside, especially in the bedrooms. Mother used to iron our sheets with a flat iron heated on the stove. That helped for about 30 seconds after we jumped into bed and pulled the covers over our heads. In the winter, people didn’t dare to sleep with their heads uncovered, lest they wake to find frozen spots on their faces. These days when I crawl into bed, I give thanks for flannel sheets and down covers.

With its wood shingles, the roof shed rainwater fairly well, but not wind-driven snow. There is one story I hesitate to tell because of its unbelievability. The lock on our front door used a skeleton key. When this key was out of the lock, it left a hole about the size of a wood pencil. Wind-driven snow could enter through this small hole. If the wind direction was just right, you might wake in the morning to find a drift inside the house that was the height of the keyhole and six feet long! This is something to remember when you are trying to seal a house to make it energy efficient. It doesn’t take much of a hole in a wall to allow a tremendous amount of cold air to enter.

Snow wasn’t the only substance that entered our house. In the Dirty 30s, or the dust bowl days, “black blizzards” 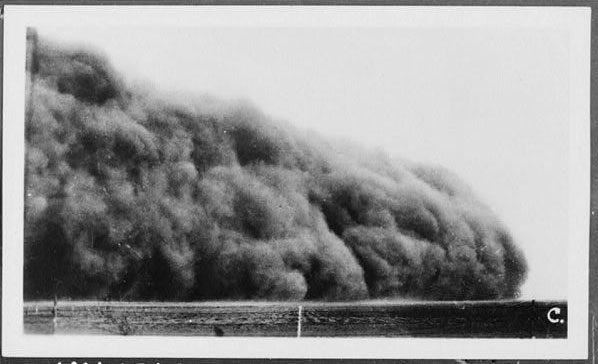 rolled across the plains states from Texas to Nebraska. These windstorms blotted out the sun. They carried dust from millions of acres of valuable topsoil from land that should never have been plowed and planted. You could see it coming from miles away from the south, unlike the white blizzards, which came mainly from the north. Before they came, Mother would soak bedsheets, flour sacks, or other cloths in water and hang them wet over every window and door in the house. She would have us children wrap our faces with a wet, flour sack and stay in a room on the lee side. All this helped, but once the dusty blow was over, we spent days removing dirt that seemed to pay no attention to the wet sheets. This was the time of a huge migration of people abandoning their homesteads and heading California way, as recorded in The Grapes of Wrath by John Steinbeck.

Times change, but do they change for the better or for the worse? We have more things, but do we have more happiness? I was born at a time and in a place where no one had electricity, and people talked to each other because there was no radio, TV, or telephone. I used a telephone for the first time when I was 13 years old. I remember trying to figure out how to hold it to speak into the right end. I learned about the world and life by listening to stories told on porches, at work, and at the dinner table. “Bless our stories that they may somehow be true, for this is all we have,” says Stuart Kestenbaum. Yes, this really is all we have.

What else do we have other than our stories? Everything else comes and goes, but our stories remain. They tell us why we are here. They keep us from cynicism and despair, reminding us that the way things are is not at all permanent. We don’t have to continue to race madly to use up every available resource exhausting ourselves and Mother Earth. They tell us that there is a better, richer, more uplifting, and more sustainable way to live. It doesn’t have to be a dog-eat-dog world. People can and do come together for the common good.

Read more of My Story As told By Houses:

In 1930, my parents bought this house, built in the 1890s, for $900 with money borrowed from the Kimball County Bank. The house came with about four acres of land and several small, deteriorating outbuildings.

What was most valuable was that the house came with a good well powered by a Dempster windmill.

Snow wasn’t the only substance that entered into our house. In The Dirty 30s, or the dust bowl days, “black blizzards” rolled across the plains states from Texas to Nebraska.