Brevard is a small town nestled in the mountains of western North Carolina. It was developed around a combination of industry and tourism, and today, it’s a thriving community rich in outdoor recreation and the arts.

Our home is in the Railroad Avenue district, the neighborhood developed around the town’s depot, originally home to essential businesses such as a livery, an icehouse, a cotton mill, and a lumber company. The houses built in this area were a mixture of merchants’ homes and boardinghouses that served visitors arriving from the depot.

Our Craftsman-style bungalow was built in 1910, and a small boardinghouse was added to the property a few years after that. When we purchased both houses in 2009, they had been abandoned for years. We bought our houses as part of a collection of seven abandoned houses. All have been or are currently being renovated, as the neighborhood has become the focus of public and private revitalization planning and investment.

There is a lot we like about our old houses. They are small and well built. The detailing is simple but strong. As we found them, the houses were shells with great maple floors, 10-ft.-tall ceilings, large windows and doors, and elegant trim and molding details that we’ve largely kept intact. Overall, the general layout of the main house was good, but it lacked adequate storage, comfortable bathroom space, a modern kitchen, and the general amenities and functional areas a modern lifestyle demands. The revitalization of this house was an exploration in space planning. We removed, moved, and added walls to carve better spaces within the old footprint. When our design goals exceeded the capacity of the old structure—as was the case with our desire for a master suite, for instance—we added on.

The changes we made to our home are not necessarily bungalow specific. Many houses share similar attributes, and they need similar design improvements to make them practical, comfortable, and pleasing places to live.

Older houses are often well proportioned with comfortably sized rooms, tall ceilings, and large windows that provide plenty of light and air circulation—important qualities in the days before air-conditioning. However, rooms are often disconnected from each other and don’t allow for the open living spaces desirable today.

Kitchens, for example, were isolated rooms with ever-changing storage options and appliances. In 1910, there may or may not have been running water in our kitchen, and it likely had a wood-burning cookstove placed in a corner. The kitchen had been updated over the years. The work wasn’t always well done, though, and the space was never fully modernized. With a couple of simple design changes between our kitchen and dining space, we opened the house from the front porch to the kitchen and back door. The spaces—living, dining, and kitchen—are clearly defined, but they remain open and connected. All our public spaces now “live together,” our kitchen is functional and comfortable, and our house feels a little bit larger.

Old houses never have accommodating bathrooms by today’s standards. It’s not uncommon to find a 50- to 75-year-old, four- to five-bedroom house with a single bathroom; a whole family commonly shared a single bath. While every house should have at least one tub for bathing kids and for other occasional needs, most of us now prefer to shower.

By fully renovating our existing bath in the simple style of the house, we got a comfortable guest bathroom that has a tub and that is open to the hall. We added a private second bath with a large shower off our bedroom as part of an addition packed full of function.

Beyond chopped-up floor plans and inadequate bathroom spaces, older houses lack the kind of storage we now find necessary. Somehow people managed to leave their houses well dressed and pressed every day with a fraction of the closet space we now expect. As part of our small addition, we also added an outdoor storage room, a pantry, and two walk-in closets. We made small internal changes to our floor plan as well to add a closet in the guest room and a coat closet in the hall. We also created a laundry space that improved the functionality of the house.

Old houses didn’t have the mechanical systems necessary in modern homes, and those mechanical systems need a place to live. Fortunately, we were able to place mechanicals so that they didn’t deprive us of valuable floor space. We used a geothermal HVAC system to condition the main house by running pipes in trenches in the yard. This system doesn’t require an outdoor unit. The indoor unit is in the attic. Our water heater is in a partial basement under our master bedroom.

A home worth preserving

Large numbers of beautiful old houses built in the late 1800s through the 1940s line the streets of central neighborhoods close to the activity of town. Empty lots in such places are hard to come by. Older homes also have elements you don’t readily find in new houses: built-up trim details and classic mantels, hardwood floors, and solid old-growth framing.

Homebuilders of old regularly relied on plan and detail books published by architects and designers, and they developed a good sense of proportion and quality.

An old house has stories that can be as interesting as the house itself. At the closing, our attorney told us that he used to spend time in the main house as a child with his friend John Huggins. After we renovated the house, we were invited to speak to the local historical society about our efforts in the neighborhood. John Huggins was in the audience that night and approached us after we spoke. He let us know that he was happy with what we had done with the place. John, now in his late 70s, told us that he was born in our house and that he and his wife spent their wedding night and first year of marriage in the guest house now used by my in-laws.

As an architect with a residential focus, I am aware of cost and quality in new construction projects. When we took stock of our renovation, it was clear that for the amount we invested, we could not have achieved the location or the quality of home if we had built new. Perhaps just as important, we wouldn’t have helped to preserve such a rich local history.

Before and After: Three areas of improvement 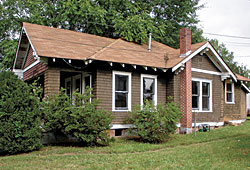 When redesigning the main house, the author focused on three primary living spaces: the kitchen, the bathrooms, and general storage areas. The original house had plenty of appealing features. Nearly all the upgrades could be accommodated in the original footprint, but the house needed an addition to make it really work. 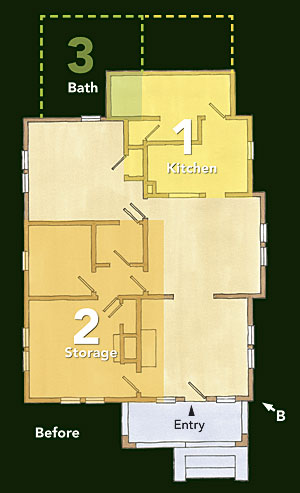 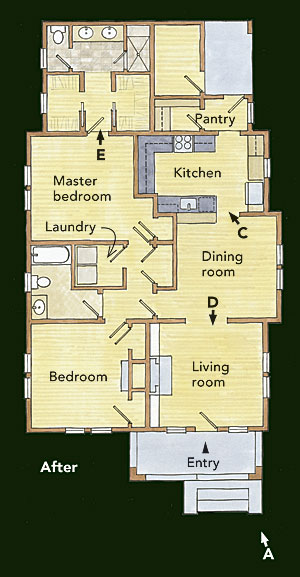 1. Open the kitchen and add storage

At some point, a pass-through was created in the wall separating the kitchen and the dining room. Now, a peninsula separates the two spaces; its raised bar topped with reclaimed oak provides a gathering and serving area. A new pantry between the back door and the kitchen catches groceries as they come in from the car, while a reclaimed-oak desk beside the refrigerator serves as command central for the house. Photo taken at C on floor plan. 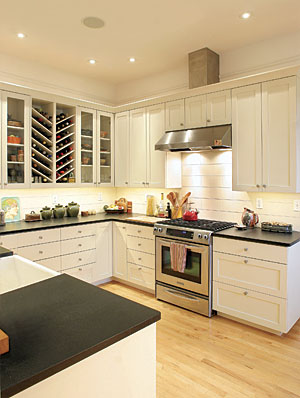 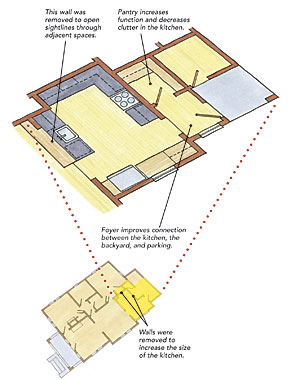 When it came to improving storage, creative use of existing floor space was critical. The walls between the dining room and bathroom were drastically rearranged to make way for two closets and a laundry room. Subtle changes were made in the wall between the guest bedroom and the living room to enable the addition of a closet on the private side of the wall and built-in cabinet space on the public side. Photo taken at D on floor plan. 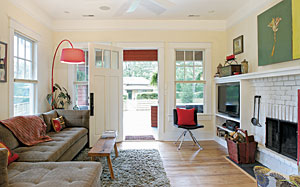 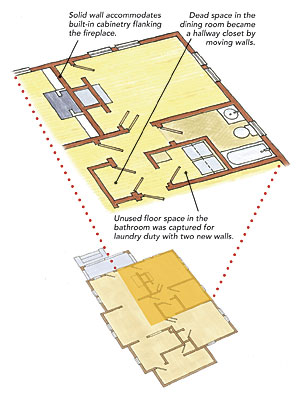 The 364-sq.-ft. addition we added to the back of the house provided us with a covered back entry, a storage room with outdoor access, a pantry, two walk-in closets, and a comfortable master bathroom accessed from the bedroom.

The addition is 26 ft. wide. This will allow the easy addition of a car shelter in the future. For that reason, there are no windows on the back wall. To get daylight into this space, we included a window in the toilet room and added over the vanity area a skylight that floods the center of the bathroom with light. Photo taken at E on floor plan. 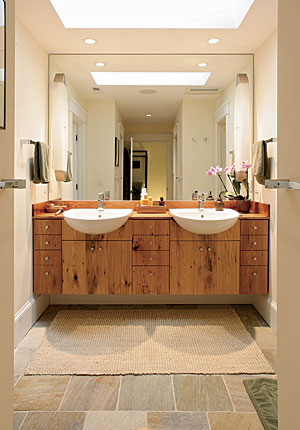 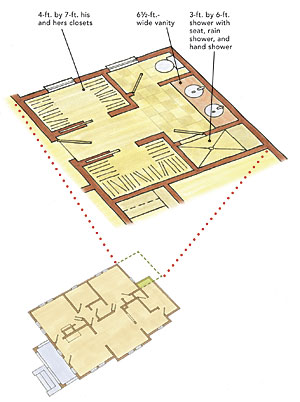 The small white house added to the property around 1915 was close to the back of our main house, which sits where it was originally built on the half-acre lot. The small house’s location didn’t allow for the addition we had imagined, and it blocked the main house from access to and views of the large backyard. We moved the small structure (photo below left) to the rear of the site and converted it to a guest house that would perfectly accommodate my wife’s parents, who come for extended stays from Switzerland.

The guest house was a blank slate when we bought it. Ultimately, we changed it from a two-bedroom house with a small living space to a one-bedroom cottage with a combined kitchen and living area and a large covered front porch.

The cottage makes good use of our entire lot and relieves some of the demand that would otherwise be placed on our small home. 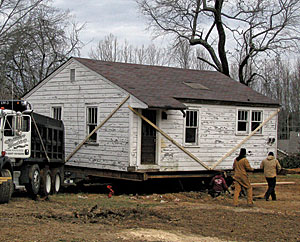 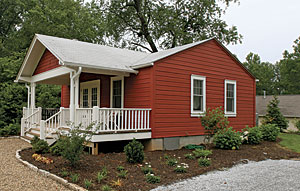 A Home for All Seasons

View All
View All Craftsman Articles