How it Works: Code Changes 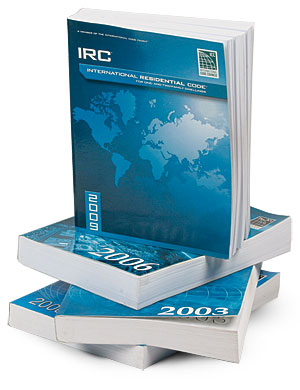 By setting minimum standards for design and construction, building codes protect public safety while establishing uniformity in construction methods and materials. Regulations governing building have existed in the United States since its inception, but they gained new importance with the growth of cities—and the insurance industry—in the early 20th century. (For a detailed look at how building codes evolved, see read “Code Shock” from FHB #232 December 2012/January 2013.)

Since the 1990s, developing and revising building codes has been the work of the International Code Council, a nonprofit organization whose membership of 50,000 includes architects, engineers, builders, elected officials, manufacturers, and others who are connected to the construction industry.

Codes developed by the ICC—dubbed “I-Codes”—are model codes, meaning they have no legal standing until they are adopted as law by a governing body such as a state legislature, county board, or city council. Today, the ICC promulgates 15 different model codes, including the International Building Code (IBC), the International Residential Code (IRC), and the International Energy Conservation Code (IECC). The codes are interrelated, cite common standards, and are updated every three years following a specific process. Each cycle, the ICC receives about 2000 suggested code changes. Roughly 900 will end up as part of the new code.

Around June, the ICC accepts applications from those who wish to serve on its 19 code committees. The applications are reviewed by ICC’s Codes and Standards Council—made up of longtime participants in the code process— whose recommended appointments are sent to (and usually approved by) the ICC board of directors. Committee members can include consumers, builders, and academics as well as representatives of testing labs, material associations, and manufacturers. At least one-third of each committee, though, must consist of code officials or regulators.

The deadline for submitting code changes is just after the first of the year. Any interested individual or group may propose a code change; however, all submissions must follow a specific format spelled out by the ICC. Submissions must include the reason for the change, supporting technical information, and a statement of its cost impact. Code-change proposals are reviewed by ICC staff for consistency and compliance with submission guides.

Behind every suggestion, an agenda While building safer structures may be the ultimate goal, there are as many reasons for altering the codes as there are players in the process— and those number in the thousands. Manufacturers looking to promote use of a new product, builders seeking methods that will speed construction or cut costs, government officials bending to political pressure, building inspectors hoping to simplify their job—all represent influences on the code-change process.

3. Proposed changes are posted and distributed

Proposed code changes are posted at ICCsafe.org and distributed on CDs to those who request them.

In late April or early May, code-change submissions are debated in a public hearing presided over by the committee responsible for that code. Following an open debate on each proposed change, committee members vote either to adopt it, modify it, or reject it. Although it rarely occurs, ICC members who disagree with the committee’s action can challenge the decision with a two-thirds vote. Called an “assembly action,” this vote is considered along with the committee’s ruling at the final hearing on the change, but the committee’s decision takes precedence. Development hearings can take up to 10 days.

“Scoping” the codes In many cases, sections of two or more different I-Codes address the same subject, so it makes sense that changes to both sections be heard by the same committee. Fire sprinklers, for example, are addressed in both the International Fire Code (IFC) and the International Building Code (IBC). If there is a conflict, the Code Correlation Committee (CCC) determines which committee hears the proposed code change.

About 30 days after the hearing, a Report of Public Hearing is posted at ICCsafe.org that explains the action taken on each proposal. The report is also available on CD. A deadline for public comment on the action is given, usually about 60 days from the posting of the hearing results.

The public has approximately 60 days from the posting of the hearing results to challenge a committee’s decision. Comments are submitted via a public comment form from the ICC website and reviewed by ICC staff.

The ICC uses a governmental consensus process to develop codes. This means that any interested individual or group may propose a code change, as well as participate in proceedings through which changes are considered. By drawing a broad cross section of opinions from builders, enforcement officials, manufacturers, and the public, the codes reflect a consensus of the construction community.

Approximately 45 days before a final hearing on the proposed code changes, public comments are posted and distributed by CD along with the original code-change proposals and the results of the public hearings on those proposals.

Whether a proposed change becomes code is determined at the final-action hearing. Code officials in attendance vote first to accept the committee decision on all changes that received no public comment or successful assembly action at the initial hearing. After that, individual votes are taken on each code change that received public comment or successful assembly action. Proponents are allowed a two-minute presentation; opponents are afforded an additional two minutes, followed by a one-minute rebuttal on each side and a vote by regulators in attendance for a final determination on the proposed change. Final-action hearings are completed in four to five days and coincide with the ICC’s annual conference, which is held in the fall.

Code-change decisions can be appealed following final action, but appeals can address only procedural matters, not the substance of the code change. There are generally one or two appeals a year, but they are rarely successful.

The updated code is published in both print and electronic formats.

Following publication, the ICC’s governmental relations staff goes into action, facilitating the adoption of the codes by local jurisdictions. Codes are not law until they are adopted by state or local governments. Lawmakers can adopt an entire code or portions of it, or they can make alterations to it. I-Codes are in force at some level in all 50 states and the District of Columbia.