Architect Peter Pfeiffer traces the genesis of his radiant-barrier roof design back to the early 1980s, when spray foam was gaining popularity. “When we were first thinking about applications for spray foam, adding it to attics was a radical change agent for the construction industry,” he recalls.

As a young architect, he felt ventilating attics to keep them cool made little sense because the major heat source was solar radiation, which he reasoned should be prevented from entering the attic in the first place. “Trying to fight radiation with convection, which is what venting is, is a weak strategy from a physics standpoint,” he explains.

Peter determined that air leakage was number one on the list of reasons for excessive energy usage. Consider that most air conditioners are set up to suck air out of the house, cool and dehumidify it, and send it through a network of ducts back into the house. When ducts are not airtight, they leak, and a good percentage of that conditioned air never makes it into the home. The house then “goes negative,” meaning it takes 100% of the air out to condition it but doesn’t return all of it, which creates negative air pressure. That forces the house to suck makeup air from every crack and crevice. The result can be a 20% or greater energy loss. The process also brings hot, humid air into the house, which the air conditioner then needs to handle.

The knowledge of this energy loss led to efforts on Peter’s part to make duct-blaster tests a code requirement, which would ensure conditioned air is not lost outside the envelope. But even sealed ducts can be less effective if they are located in an unconditioned attic. Peter envisioned not only sealed ducts but also a sealed attic space, with a system for venting the roof deck to reduce heat gain and keep the attic as cool as possible.

Ventilated attics cost a lot of energy and money while lessening occupant comfort due to high humidity and poor air quality. The growing popularity of recessed can lights exacerbated the problem—installation required puncturing holes in the ceiling, which allowed heat from the attic into the living areas below. This, combined with the dark roofs common at the time, made for a solar-collecting roof assembly. Air-conditioning ducts with minimal R-4 insulation were being subjected to high heat. For these reasons, Peter began thinking about attic radiation barriers.

The First Generation of Radiant Barriers

At first, it was a matter of draping a 4-ft.-wide roll of foil between rafters, which would cut attic temperatures by 15°F to 20°F. He then developed a system that would be easier for builders to install: foil-laminated plywood sheathing. It was branded “Kool Ply,” and it informed the product now sold as LP TechShield.

When spray foam started to take off as residential insulation, it was expensive but effective; it enabled much tighter houses and reduced the need for caulking and gaskets to stem air infiltration. It also eliminated the call for netting beneath rafters in order to blow in insulation for a cathedral ceiling.

Peter experimented with installing cardboard beneath the radiant-barrier sheathing to form a continuous air channel from soffit to ridge. Foam was sprayed to the underside of the cardboard and rafters, creating a ventilated roof system with a sealed attic. It was a costly approach, and Peter wanted an alternative. “It dawned on me that galvalume—a new product at the time that coated sheet metal with zinc and molten aluminum—could be an advancement,” he explains. 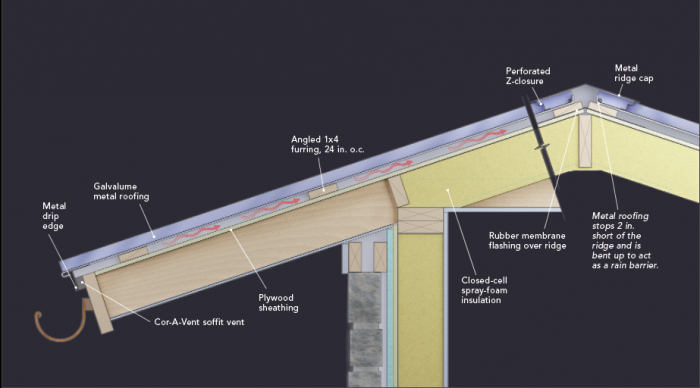 Galvalume panels reflect a fair amount of incoming radiation. The panels’ performance can be boosted by providing an air space under them, which minimizes conduction to the roof deck and, because of galvalume’s low emissivity, allows the panels to act as a radiant barrier. Peter started out using 1×4 vertical furring strips 24 in. o.c. from soffit to ridge, with another layer running horizontally. To reduce the cost of the assembly, he switched to using one layer at about a 45° angle (parallel to the roof valleys), which provides adequate ventilation with about half the furring.

Further iterations of the assembly included an air-venting strip in the soffit, which required cutting into the sheathing above to create a gap for air to escape. That left the sheathing edges exposed to moisture, so Peter added 1-in. gaps between the furring-strip ends to create more air pathways and increase drying potential. He decided to stop the furring and galvalume 2 in. shy of the ridge, and bend the metal up between the ribs to act as a barrier to wind-driven rain. He used 18-in.-wide strips of sheet metal to make a ridge cap—9 in. on each side. That allows air to come out the top, but rain can’t get in.

The next evolution moved the air intake from the soffit to a Cor-A-Vent strip installed behind 1-1⁄4-in. D-style galvalume drip edge. This configuration brings air into the roof system without having to fuss with the soffit. In time, Peter adjusted this Cor-A-Vent detail to include a 45° angle; when it sat flush with the soffit, it hindered air movement. He also decided to run the furring strips farther apart to increase air movement: 24 in. o.c. with 2-in. to 3-in. gaps between the ends.

“This roof system came out of decades’ worth of nuancing and getting feedback from builders,” Peter says. “Elevating the roof cover off the decking to induce above-sheathing ventilation is as important as increasing solar reflectance, and may be the stronger player in reducing heat gain.”

Peter says the system works in all climates. In cold-weather locations, it stops snow melt and subsequent ice damming; if heat rises up from the attic and through the foam, it leaves through the ridge. And because the furring also works as a rainscreen, it is suited to wet climates too.

Learn more about these ideas in practice in the article “Energy-Smart by Design” from Issue #3o1. 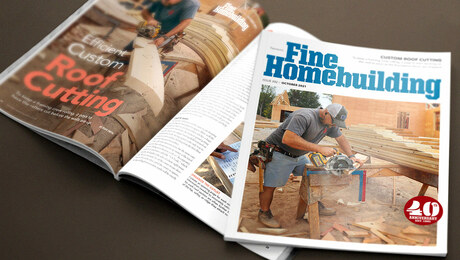