When it comes to saving money on utility bills, the jury is still out on whether radiant barriers are worth it.

Want to get builders into a heated discussion? Bring up radiant barriers.

Promoted as a method for reducing cooling costs by mitigating solar heat gain through walls and attics, these shiny (typically aluminum) surfaces have as many detractors as proponents. The dispute is not about the science of radiant-heat transmission; it’s whether applying that science to your roof will make a difference on your utility bill.

Heat energy moves through houses (and everything else) in three ways: conduction (when objects touch), convection (through air movement), and radiation (through an airspace or vacuum via electromagnetic waves). Insulation, thermal breaks, and air-sealing prevent conduction and convection; radiant barriers prevent heat transfer through radiation only.

Emissivity (or emittance) measures how much radiant energy a material emits. It’s rated on a scale from 0 to 1; the lower the value, the less energy emitted. Radiant barriers by definition have an emissivity of 0.1 or less, emitting 10% or less of the radiant energy striking them.

Are they radiating or reflecting?

Both, actually. Surfaces that are highly reflective to long-wave (heat) energy are also low-emitting. Aluminum, for example, reflects 97% of the long-wave radiation that hits it, emitting 3% into the airspace on the other side. Remember, though, we’re talking about invisible, long-wave radiation—not visible light. White paint, for example, does a great job of reflecting light but a poor job of blocking long-wave heat transfer. The key point is this: A material can look reflective and not be a good radiant barrier, and a good radiant barrier will work whether or not the shiny side is facing the heat source—as long as it is facing an airspace.

Fine. But do they work?

Current research supports radiant barriers in attics as a viable strategy for reducing cooling loads in hot climates. This reduction, however, is limited to solar gain from the attic—about 22% of a home’s cooling load. So even though research has found that radiant barriers can deflect 40% of incoming attic heat, the net savings represents only 8% to 10% of a home’s total cooling costs.

The benefit is even sketchier in northern homes, where summer heat gain is less of a concern and the barriers may limit beneficial winter solar gain. Although radiant barriers may help to retain winter heat, most winter heat loss through attics is due to convection (rising air), not radiation—making proper insulation and air-sealing far more effective.

Where radiant barriers work—and where they don’t

Because radiation occurs in an airspace, radiant barriers won’t work unless they face an airspace. Pressed between two surfaces, a radiant barrier becomes a heat conductor. In addition, because heat moves toward cold, there also must be a difference in temperature between materials. Radiant barriers, then, are of negligible benefit in well-insulated homes.

Vented attics can be good places for radiant barriers because they contain large airspaces and take the brunt of solar-heat gain. Because walls are subject to less solar gain and because heat transfer through them relies more on conduction and convection than radiation, radiant barriers in walls provide less benefit. Although barriers placed on attic floors can work, surface dust will eventually hinder performance.

In a new vented attic, radiant-barrier sheathing can be used (below left), or a foil barrier can be draped over the rafters or trusses before sheathing is installed (below right). In the second example, the airspace created in the rafter bays enhances the foil’s effect by increasing ventilation. 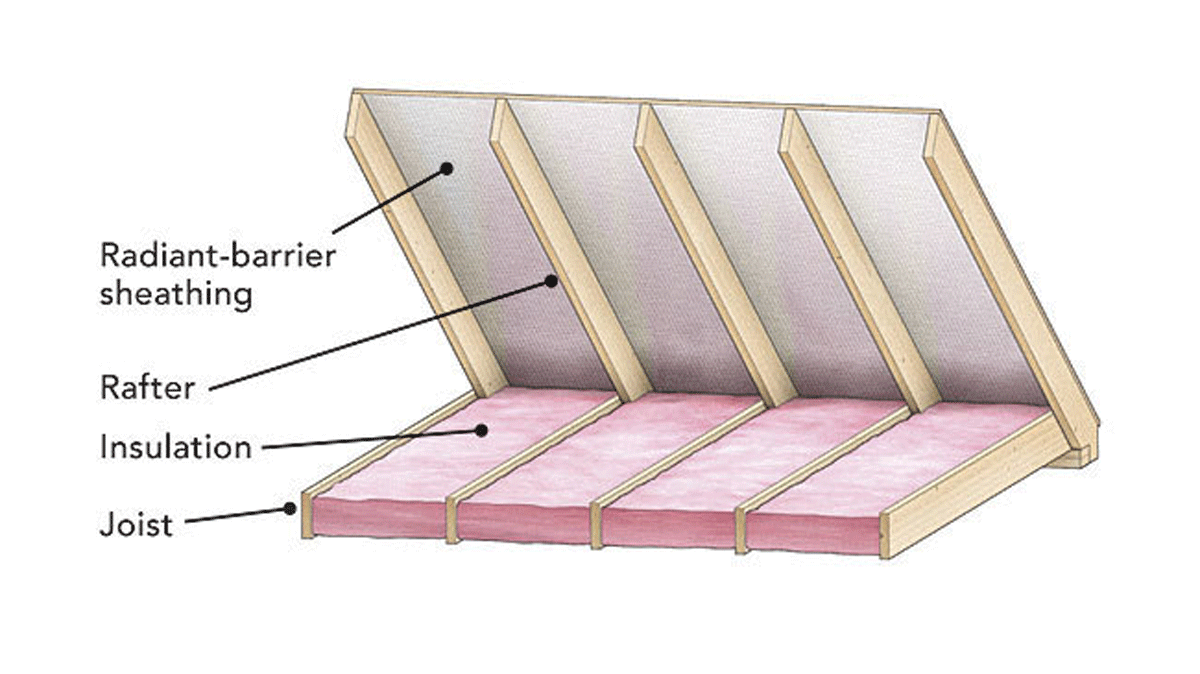 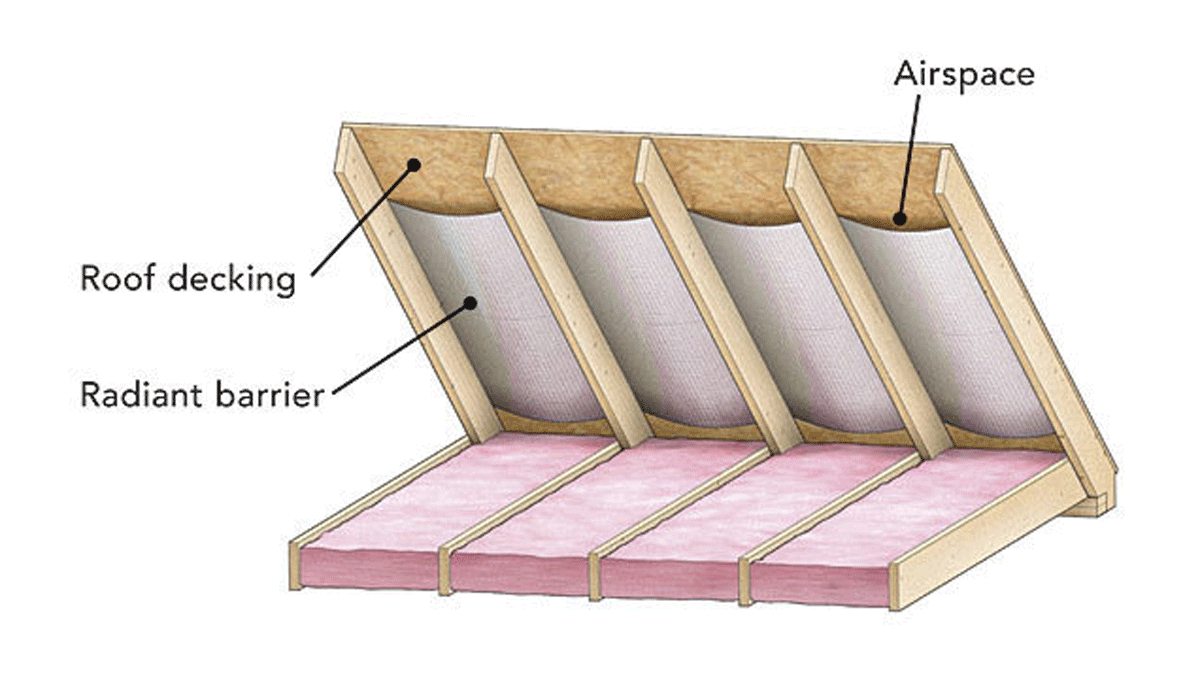 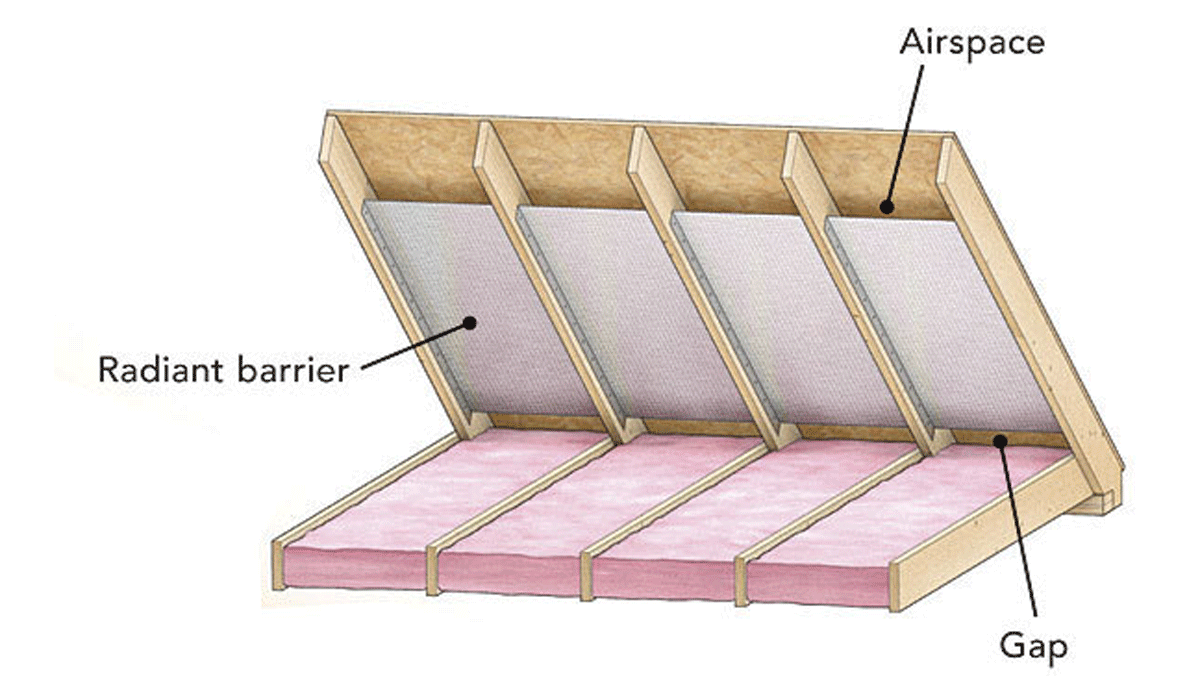 Radiant-barrier foil can be attached to the rafter sides (below) or to the faces (top). The latter method curtails heat transfer through the rafters and is preferred. In both cases, gaps at the top and bottom promote ventilation. Double-sided foil provides a small increase in effectiveness.

X
X
Previous: Insulating Glass Keeps Getting Better Next: Do I Need a Vapor Retarder?