How to Replace a Return Duct in an External Stud Wall?

The house has insulation and air-sealing details typical to this age home — meaning they’re woefully inadequate in today’s thinking.
I started a project to repaint a room on the first floor, and decided that it made sense to replace the drywall on the two external walls, both because they were in rough shape cosmetically, and as a way to get a sense of the level of insulation that was done in the original build.  I found 1” (maybe 1.5…) of fiberglass, surprisingly foil faced on both sides — something I’d never seen before.
The puzzling thing I found is shown in the photos.  I came across this stud bay with the insulation methodically face-stapled to keep it compressed against the external sheathing.  After scratching my head for a bit, I came to the realization that I was looking at a cold air return duct for the furnace.  There is a duct-in-joist return air handler in the basement ceiling, and this bay was apparently used to extend the return air duct system to the 2nd floor, up through the front stud wall and into the Cape’s eave space. Not sure if this was part of the original build, as you’ll be able to see the hacked wall plates in the top and bottom of the photos, which suggest that maybe they were done after the build.
I’d obviously like to eliminate this gaping hole in the insulation/air seal layer, but how? There’s no easy way to move the duct to the perpendicular inside wall, as there is a doubled floor joist directly beneath it supporting the stairway opening.  So my choices, as I see it, are:
1 – Fill the bay with insulation like the rest of the wall, but build a bump-out encroachment into the corner of the room to house a conventional metal air duct.  This is likely the correct solution, but I hate the aesthetics of having that bump out intruding into an already-small room.
2 – Leave the return air duct in the wall, but modernize it by lining it with 1” sheet foam on the external sheathing and stud sides, and sealing the corners with spray foam. This would be “better” than the existing duct, and provide a better air seal, but less insulation than the rest of the stud bays. (And it feels like a hack solution…)
So, my questions:
– Have you ever come across this type of thing? I’m an advanced DIYer, and in my 45 years or so of rehabbing homes I’d never seen anything like this before.
– Would you choose one of my solutions above, or do you have some sage advice on how to address this that I haven’t thought of?
Thanks so much for any direction you can offer.
-Steve 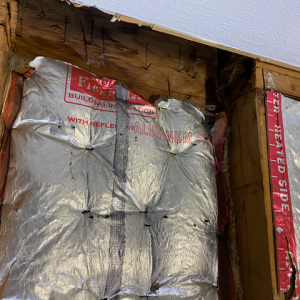 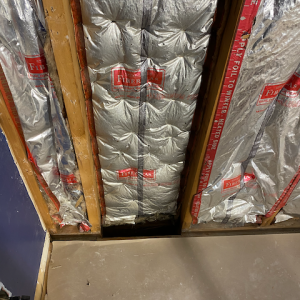 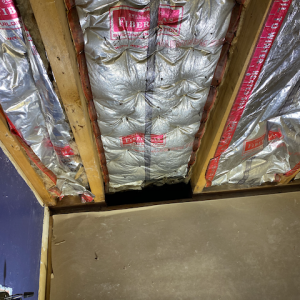 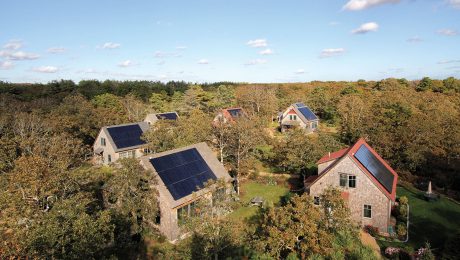