Modifying an old built up beam

I’m working on a 1920 house that shows balloon style framing morphing into platform. One of the weird things is the way they did the floor joists.   These run into the main carrying beam,  and sit on a notched 2×4 ledger nailed to the beam.  So far so good.  The weird thing is that the joists are cut with tongues that overtop the main beam.   Above them is the sill plate for a load bearing wall on the first floor.   The sill plate bears on the joists’ tongues, which bear on the beam.    See pic.

The beam is a built-up beam consisting of (3) true 2x10s.  As built, one end rests on the rubble stone foundation, and there were posts at the 1/3 and 2/3 points, but the first of these posts was moved (probably 50 years ago).  Now it’s several inches from where it was.   The original location gavec support to  a butt joint in the beam and supported the main load path from the 2nd floor.  The new location is centered under an archway!   As a result that was a significant sag at the butt joint.

Besides straightening the 1st floor, the goal is to relocate the post to the 1/2 way point to make the basement space more useable.   I hired a structural engineer to draw up plans to replace just half the beam with an LVL, and was allowed to take plenty of time to jack sag out of the beam.   This went surprisingly well… we managed to straighten things out without breaking anything or lifting the house off the foundation.  So now we’re ready to proceed.

The original plan included shoring up a second story main beam that’s overhead.  To do that, we’d have to really mess up the first floor by peeling the wall covering and pulling back flooring, to run temporary supports from the basement to the 2nd story.  The StrEng’s plans also call for cutting the tongues on these joists so the new beam would set right up against the first floor’s bottom sill.

While we were patiently jacking, I may have hit on a new idea that will save us from tearing into the 1st floor wall/floor.   Before I spend money talking to the StrEng about making a change, I thought I’d ask the board here for input.  That way I’ll ask the best questions.

The new idea is to still move the post from the 1/3 point to the 1/2 way point.   But instead of REPLACING the beam, what if we just reinforced/spliced the butt joint with angle iron?    An 10-1/2 foot run of angle iron could bear on the top of the foundation and the new post at the 1/2 way point.   The Eng would need to spec the angle iron.   Because the weird joist tongue make that 2″ gap between the top of the beam and the sill plate above that gives us room to shore that wall from BELOW the sill, doing all the work in the basement.  We’d have to shore the joists and brace them in position, then trim them back just enough to accept the vertical face of the angle iron.  The horizontal piece would go the midpoint under the original beam.   With angle iron on both sides, Once its in place they can be drilled for bolts.   The end on top of the foundation will need some moisture proofing.

Does anyone see anything wrong with that approach?   Any concerns or other things I should bring up when I ask the StrEng to look into this alternative? 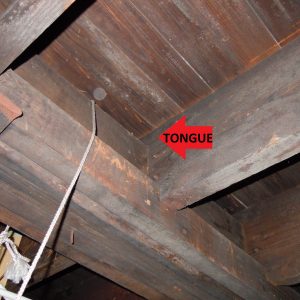 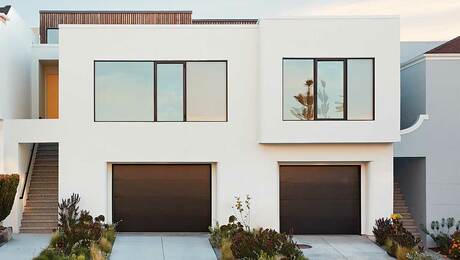