Learn how one carpenter resolves conflicts between trim design and installation around the stairs.

Synopsis: After the framing is done, it’s time for the trim carpenters to do their work inside the house. Frequently, they’re called on to do work to compensate for places where the framing is unsightly. In this “Master Carpenter” article, Boston-area finish carpenter Tucker Windover outlines his process for resolving issues when installing trim around stairs and when trim designs conflict. Windover illustrates how to do continuous crown and how to use a continuous cap to tie a stringer to a baseboard. This article also includes sidebars about how to level a wall so that the chair rail can be installed properly and how to use a miter-saw jig for cutting obscure angles.

Often, a builder or a homeowner hires an architect or designer to provide plans that include only enough detail to obtain a permit, which means that a lot of the design is left to work out in the field. Framers tend to focus on the bones and the structure, and it’s not until the trim carpenter is on the job that the final details are resolved.

There might be a window installed close to the ceiling, and no one notices that the casing almost touches the ceiling until the trim guy tries to install the crown molding. Or the walk-in shower is framed, and no one has considered how the tile, the baseboard, and the curb to the shower will tie together. Another tricky spot is where a window is set close to an entry door — so close that they cannot be trimmed separately, meaning the trim carpenter has to make sense out of trimming them as a single unit.

Trim carpentry is the icing on the cake, and everything shows. Every house has some funky corner or door opening where I just stop and ask, “How are we going to trim this out?” It’s the trim carpenter’s job to resolve those challenges. What I mostly want to accomplish in these situations is a resolution that draws the least amount of attention to the problem. I usually can accomplish this either by showing a clear termination point or by maintaining a clean, continuous line. These kinds of problems show up at the staircase in almost every house.

Running trim refers to those elements such as baseboard, chair rail, or crown that travel around a room. Whenever I run trim, I try to maintain a continuous flow of lines and to avoid choppy alignments that seem arbitrary or illogical.

For example, in most situations, a chair rail should be aligned with the window stools. Unless there’s a major separation between the two (as in the high paneling of the Arts and Crafts style), a slight discrepancy looks like the designer or installer didn’t care.

One example I commonly face is when the crown molding intersects with a roofline or the underside of a stairwell. To get around this, I build a soffit onto the angled ceiling that allows the crown to run around the room without changing its relation to the wall.

The soffit is a piece of 1x stock beveled on one edge to match the angle of the ceiling. Its width is determined by the angles of the ceiling and the crown. It has to be wide enough so that the crown can turn the corner and still maintain its spring angle. I use a plywood gauge that mimics the specific crown angle to set the soffit’s location. That location also should include a 1⁄4-in. reveal at the bottom of the crown. After snapping a reference chalkline, I nail the soffit to the ceiling, then continue the crown installation across the soffit… 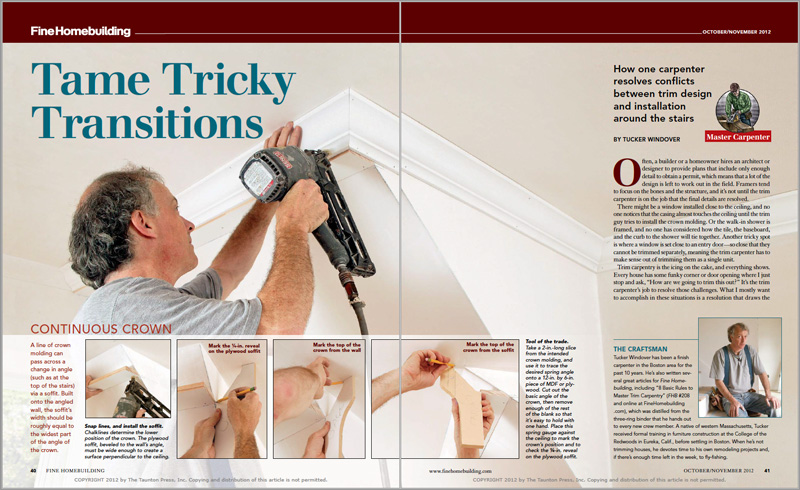 To read the entire article, click the View PDF button below.