Confessions of an Energy Dinosaur

Builder Scott McBride reflects on the disconnect between the act of building a house and making it energy efficient.

Synopsis: The world of residential construction as builder Scott McBride experienced it some forty years ago had very little focus on energy efficiency. In this As-Built column, Scott details some of the lessons learned in recent years aimed to reduce energy costs and consumption, including conditioning spaces, managing moisture, forgoing wood, and filling insulation gaps.

In recent years, I’ve been struggling to make sense of the disconnect between the hi-tech “builds” that I read about in today’s trade journals and the world of residential construction as I experienced it some forty years ago. In those days, houses were framed and sided on a per-square-foot basis by restless young men with strong backs and not much education. Energy efficiency, if it was considered at all, rated way behind important things like fast cars, controlled substances, and girlfriends.

The builders for whom these roughnecks toiled were perhaps even less focused on building an efficient house. Many of them practiced a sort of slash-and burn house-building that was just good enough to close the sale, pay off the bank, and move on to the next project.

When OPEC choked down on the oil supply in ’75, shock waves reverberated throughout the economy, including the building trades. To save petroleum, a few low-hanging-fruit measures were permanently adopted, such as 2×6 exterior walls and insulating glass— but when oil prices retreated, most things went on as before. This wasn’t just negligence; the know-how to build efficient houses—“building science”— was in its infancy, and the knowledge was slow to disseminate because there were few institutions for training the people building the houses.

Unlike the manufacturing sector, which invests heavily in worker training both in-house and through trade unions, home building in the U.S. remains, even today, a highly decentralized industry with little longterm commitment on the part of builders toward their carpenters, or vice versa. It takes a village to establish and maintain a training program, but across much of America builders and remodelers are still harried loners struggling to run a business and make a buck. Sorting through the differences between Swedish flashing tapes would be nice, but who has the time?

And yet change we must. It’s increasingly obvious that wasting fossil fuel isn’t just extravagant—it’s self-destructive. Even the possibility of man-made climate change demands action of any thinking person. Yes, it’s confusing and stressful to do things differently than “the way we’ve always done it.” But here’s the good news: The impact generated by a conscientious builder will be multiplied every hour of every day for the life of the building. Think about it: recycling an aluminum can is a one-time good deed.

But if you pause for a minute to shoot a bead of caulk under a wall before you raise it, there will be energy saved and CO2 reduced for the next seventy years or more. You can think of that as an awesome responsibility, but perhaps a better motivator would be to think of it as a pretty cool opportunity.

So here are a few lessons offered not by an on-fire energy nerd, but from a grouchy old dog who has reluctantly got with the program. 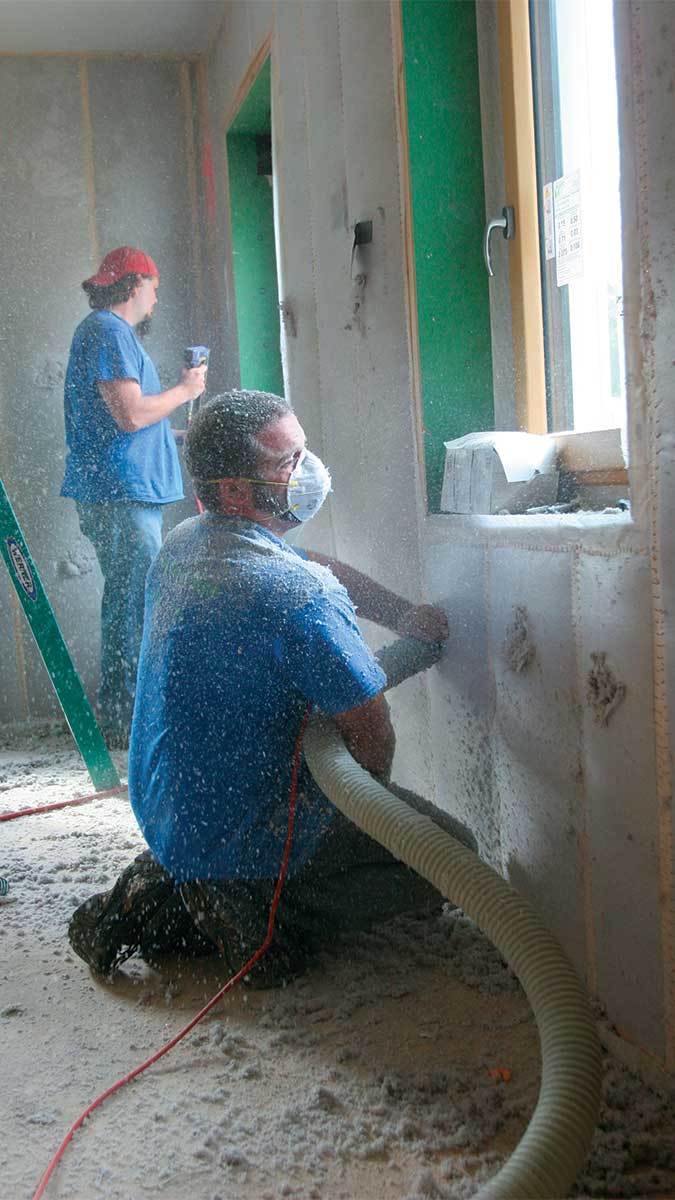 The boundaries of the thermal envelope have shifted markedly since I started building. At that time, much of the space within a house was unconditioned. We stuffed fiberglass batts under the first floor, leaving a cold, damp basement or crawlspace underneath. In unfinished attics we insulated the floor, and in finished attics we insulated the kneewalls. It made intuitive sense: When you’re in bed on a cold night, you wrap the blanket around yourself as tightly as possible. As for the unfinished spaces outside the thermal envelope, we believed that air movement was good—the more ventilation the better.

But there were problems with these unconditioned spaces. First, we didn’t understand that air moving through fiberglass insulation slashes its effectiveness. Second, we didn’t appreciate the amount of energy lost by ductwork passing through those unfinished spaces, even if the ductwork was insulated. Most importantly, we didn’t realize that a zigzagging thermal envelope composed of many separate parts (floorboards, baseboard, drywall) loses tremendous amounts of energy as air filters silently through the cracks.

One part of the solution to these problems has been to push the envelope outward as far as possible. That makes it simpler and thus easier to seal, especially with foam. It also reduces losses from ductwork by keeping it inside conditioned space. The other part of the solution is learning to aggressively hunt down and seal the air leakage that you can’t see or feel— unless of course you’re the one paying the energy bills.

Condensation was not well understood in the old days because it was a rare problem. Houses were so leaky that when condensation did occur inside wall cavities and crawlspaces, it usually dried out on its own. The first time builders realized they had a problem was when cathedral ceilings came into vogue in the 1960s. Warm, moist air rising between the rafters caused paint to fail, and removing the damp drywall exposed wads of soggy fiberglass. The situation was even worse with a tongue-and groove ceiling.

Since spray-foam insulation was unheard of in those days (unless you operated a cold-storage facility), builders addressed the problem with polyethylene vapor barriers. The results were mixed. These barriers worked where summers were cool and reasonably dry, but caused problems in swing climates such as those in the mid-Atlantic. Imagine August in Virginia with a muggy 95°F on the outside and an air-conditioned interior at 65°F. The temperature differential caused exterior moisture to drive through siding and gaps in the sheathing.

It then wafted its way through the fiberglass until it chilled on the back side of the vapor barrier like droplets on a glass of lemonade. Since drying to the inside was blocked by the vapor barrier, condensation was trapped in the wall cavity, causing mold and decay.

Wood in the wall

It’s pretty obvious that wood is a poor insulator. All you have to do is look at a snowy roof as it melts. Vertical stripes show plainly where heat passes quickly through the rafters compared to the rest of the roof. But in a time when both wood and energy were cheap, we thought nothing of packing the wall with wooden members of questionable necessity. Headers? Make ’em all 2×10 “to be on the safe side,” and slap a flat 2x on the bottom just to make it the same thickness as the wall. Plates? Double them automatically, and run a plate through the gable wall to make it easier to frame. Plywood missing a stud? Throw in a nailer. Altogether this extra wood might have saved us carpenters a few hours. But for the next century, it would bleed Btus and drain the finances of succeeding generations of homeowners. 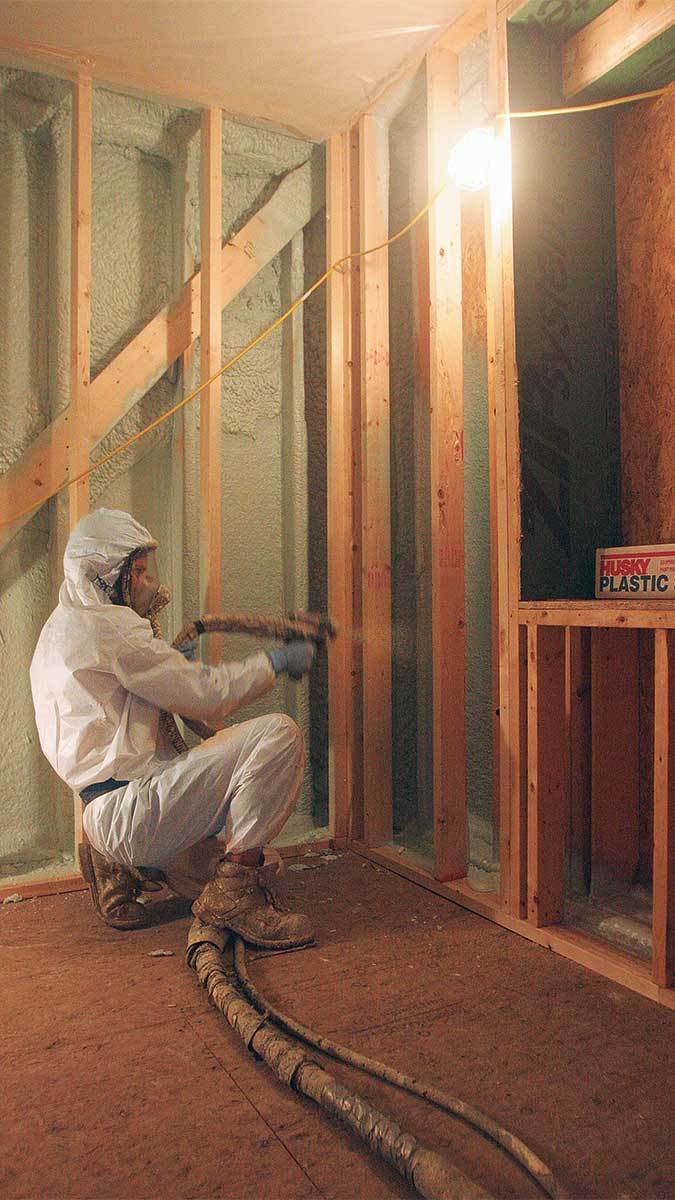 It’s tempting to think of insulation as the last thing that happens before close-in, but at that point there may be places you can’t reach because you didn’t pay attention to what the subs were doing. Did the framers detail their corners and wall intersections such that they can be filled with insulation? Did the HVAC crew run ducts in the basement that block access to the band joist? Did they remember to put foam board behind that vertical duct that had to go in an exterior wall? Can we insulate effectively behind the whirlpool bath? Is there. insulation behind the breaker panel?

In other cases, special conditions create spaces that are too small for even the smallest insulator to wriggle into. If you can’t eliminate these insulation dead zones in the design phase, then you’ll need a strategy to insulate them outside of the normal construction sequence.

Rise to the challenge

Frankly, the subject of energy detailing isn’t what puts fizz in my cup. My primary satisfaction as a carpenter is to stand back and look at what my hands have made. And the beauty of an energy-efficient home goes unseen. With so many other demands pressing on builders—impatient clients, government regulations, and, of course, the bottom line—it’s tempting to punt on energy. But my faith teaches me to take the long view. A Proverb reads: “Where there is no vision, the people perish.” I take my hat off to the young builders—and architects, academics and publishers— who have responded to this moment in history by raising the bar on efficient building practices. Who knows whether or not they have been placed on our fevered planet for such a time as this?

Scott McBride is a builder and writer in Virginia.

Previous: Conditioning an Attached Garage Next: Is a “Pretty Good House” Good Enough?