While on one of my daily inspection tours of the job site, I saw out of the corner of my eye my plumber doing what looked like an aerobic exercise while standing shoulder deep in a narrow ditch. With sweat running down his face, he was rapidly pulling back and forth on a piece of nylon mason’s line. When I asked him what he was doing, he gave me one of those you-ignorant-dweeb looks and replied that he was cutting a piece of 4-in. ABS plastic drain pipe. Sure enough, he had just made a perfectly straight cut through the piece of pipe. The pipe was almost totally buried in the narrow ditch, in a position that would have been tough to reach with even a reciprocal saw.

The plumber had threaded the line under the pipe, as shown in the drawing. Then he used a quick sawing motion to cut — maybe burn is a better term — the pipe in half. The trick to doing it right is to use enough line so that you can make long passes, pumping back and forth, or up and down as the case may be. Don’t stop, or the line will seize in the melted kerf.

It turns out that mason’s line will cut ABS and PVC pipe, in both schedule 40 or 80. The method is equally useful for flush-cutting a pipe where it emerges from a wall or a slab.

Edited and illustrated by Charles Miller 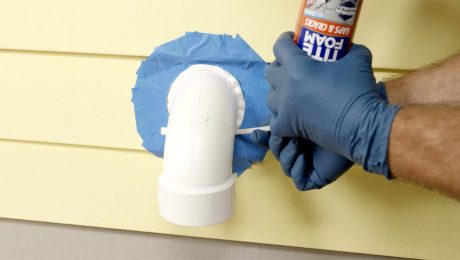 Learn how to use Loctite TITE FOAM Gaps & Cracks to create a complete seal.