Plastic pipe, whether PVC or ABS, is the go-to DWV (drain-waste-vent) option in most houses today, replacing cast iron in all but high-end construction. There are good reasons for the popularity of plastic DWV pipe: It’s relatively cheap, it’s light, and its smooth interior isn’t prone to clogging. The only common complaint is that it can be noisy in comparison to cast iron. While I personally like the sound of functioning drain lines (it beats the silence of nonfunctioning ones), some people don’t like to be reminded that their house has indoor plumbing. But this is easy enough to deal with in the design stage, if you remember to include plumbing chases that are large enough to stuff with sound-absorbing mineral wool.

Both PVC (which is white in color) and ABS (black) pipes are code approved. The choice between them is generally a regional preference. Where I worked as a builder in New Jersey, PVC was used in most houses. Two hundred yards across the Delaware River in Pennsylvania, all the plumbers used ABS. The main difference in working with the two used to come down to the fact that ABS doesn’t require a primer before gluing. In fact, although the use of a primer on all PVC used to be a code requirement (primer is dyed purple so that inspectors can see it’s been used), that’s no longer the case for pipe less than 6 in. in diameter. Primer is still a good idea, though; remember that building codes simply define the worst job you can legally do.

While plastic pipe is so easy to work with that it’s often slapped together without much thought, there’s more to it than meets the eye. One of the main steps that’s often ignored is beveling the ends of the pipe inside and out. The inside bevel eliminates sharp edges that could snag debris and cause clogs. Beveling the outside is important to streamline assembly and ensure leak-free joints.

Check out this related video: The Right Way to Join Plastic Pipe 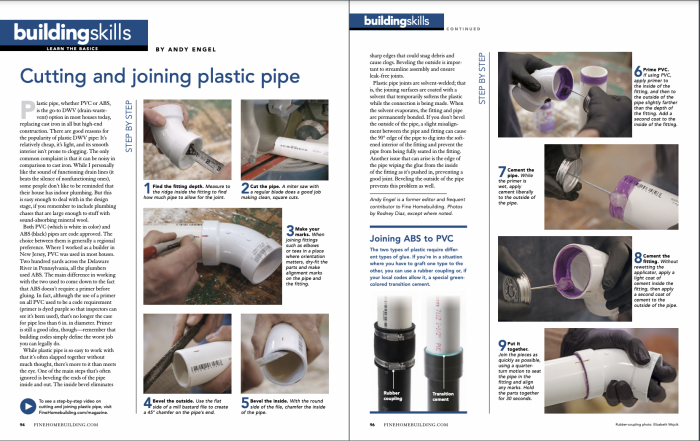