Great moments in building history: Carpentry is not as simple as you might think

The distinction between a carpenter and someone who merely does the work of a carpenter is little understood and seldom made anymore. So much has become simplified and prefabricated that the principal function of a carpenter these days is to install rather than to build. Somehow, I grew up with an antiquated notion of carpentry–an understanding incompatible with roof trusses, nailing guns and prehung doors. And so, several years ago, I set out to become a carpenter, no more and no less. I was ready to work at it until I could use that title without qualification.

When I went to work for Rus, I’d been working at it for three years, but wasn’t a carpenter yet. Rus was acting as general contractor on the conversion of two old barns into homes for this mother and sister. He started me out on simple things: shoe mold, closet shelving, window and door trim. But then be began challenging me to do things that I’d never done before, never even seen done: a dovetailed towel rack for one of the bathrooms, a paneled wall with a hidden door in it. If Rus didn’t know the full extent of my abilities, he knew at least that they were beyond my own estimation.

In one of the barns, Rus had reused an original set of stairs; they had been roughly built and bore the marks of 60 years of hard use. As the finish in the rest of the house came up, he regretted more and more his decision to save them. I had long been interested in stairwork; it is one of the few areas of the trade that has not been simplified to the point of absurdity. So I offered to tear out Rus’s old stairs and build a new set. He quickly accepted. They were a straight run between two walls, narrow and steep. But they were my first set of hardwood stairs.

At the top I built a short balustrade: newel post, level run of handrail 8 ft. long and square oak balusters. Knowing nothing of grooved handrail or fillet and shoe rail, I mortised all 18 balusters top and bottom with a drill and chisel.

Rus’s ultimate challenge came when he suggested that I could do the “other handrail,” referring to a winding oak staircase from a Stanford White mansion that he had bought, dismantled and reinstalled in one of the barns.

The stairway was 4 ft. wide. Open on one side, with a quarter-turn two-thirds of the way up. It rose from the center of the house and was the first thing anyone saw coming in the front or back door. The original newel posts and balusters had been destroyed, but Rus did have the six-piece mahogany handrail. All along he had intended to have an old master carpenter come out and build the balustrade. I had been looking forward to working with the man. I told Rus that I couldn’t possibly do it myself–I’d never done such a thing before, never seen the original, and wouldn’t know where to begin.

“I remembered an old union carpenter telling me that all there was to carpentry was “plumb, level and square” . . .”

But then I started thinking seriously about the handrail. How would I go about building it, if I had to? As with the other projects Rus had proposed, I was intimidated at first; the job seemed far beyond my skills. But after living with the idea for a few days, my mind began to break the whole thing down into its component tasks, until I no longer saw one complex problem, but rather a series of simpler ones.

I remembered an old union carpenter telling me that all there was to carpentry was “plumb, level and square.” For years, I’d been trying to reconcile my respect for that man with what had seemed a gross oversimplification. Suddenly I knew that he was right. The tolerances varied certainly–laying out and framing a wall need not be as precise as laying out and building a balustrade–but the principles involved were the same.

As soon as I began to look at Rus’s balustrade as a winding studwall, I realized that I could put the entire handrail together as it had been originally, with its hanger screws and star-shaped nut, and lay it directly on top of the stair treads to determine length and position. Then all I would have to do would be to raise it equidistant off the stairs and put in the balusters. This was the breakthrough I had needed; I knew I could do it.

And I did do it, working slowly and tentatively. Before I mitered the turnout section of handrail into the newel cap, I took the pieces home with me overnight, which somehow prepared me to cut them. I sat on the stairs and worked patiently with a rasp to shape the curved, compound angles of the balustrade around the curve in the stairs. I set up and took down the entire staircase section of balustrade several times before I was confident that I had it right. And I struggled with the assembly of newly milled handrail and balusters around the second-floor stairwell, starting at one end, aligning the balusters one at a time, slipping and having to start over. All of this caused some consternation among Rus’s family, but Rus himself understood and left me alone.

It surprises me now to realize that I can actually say at what point I became a carpenter. But when I finished the balustrade, I knew that it was so. And the difference had nothing to do with what I’d learned of stairwork; it had to do with confidence.

For years I’d looked at carpentry as though it were an exact science, a matter of right or wrong, but it isn’t. It is a pragmatic business, governed by a few, very basic principles and beyond which it is a question of what will or will not work. I understood “plumb, level and square,” and knew that I could figure out how to build just about anything. My way might not be the best way, but it will work.

Certainly there is more to becoming a carpenter than acquiring confidence, and the process is different for everyone. But for me, it was this confidence in my own ability to solve problems, ultimately to get the job done, that was the final step. This made me a carpenter–not a master by any means, but ready at least to begin earning that distinction. 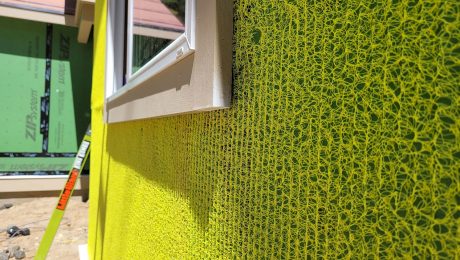