Sizing up a Shower

Bathroom expert Andrew Wormer answers a reader's questions about the ideal dimensions for 2-person showers and for showers without doors.

My husband and I want to expand our shower into a 42-in. by 84-in. space. What is the minimum space requirement for a two-person shower, and what dimensions do we need to eliminate the shower door?

Andrew Wormer, author of The Bathroom Idea Book, replies: The National Kitchen and Bath Association (NKBA; 877-652-2776; www.nkba.org) recommends minimum sizes of 36 in. by 42 in. for one person and 42 in. by 42 in. for two people. Generally, the space should be large enough to fulfill the needs of those individuals using the shower. It may seem obvious, but two large people need more room than two small people.

I think your 42-in. by 84-in. area is plenty large enough, and it can allow a doorless entry. The NKBA recommends a space at least 60 in. deep for a doorless shower. They also recommend that if there is no door, then more attention should be paid to waterproofing details on surfaces outside the shower due to the extra humidity and oversplashing that this type of shower typically generates.

For a two-person shower, plan on separate shower valves for each shower head My suggestion for your space is to place the two shower heads side by side along one of the long walls, then to put some kind of bench for seating along the opposite wall. I also would make at least one of the shower heads a hand-held model mounted on an adjustable-height track. In my experience, a hand-held shower head makes cleanup in an oversize shower a much easier task.

The doorless issue is also trickier in your long, narrow shower, especially if you mount the shower heads on the long wall. Consider adding walls to create an S-shaped entry with the walls acting as baffles for the splash. Keep the openings at a 24-in. minimum, and you won’t lose functional area in the shower. 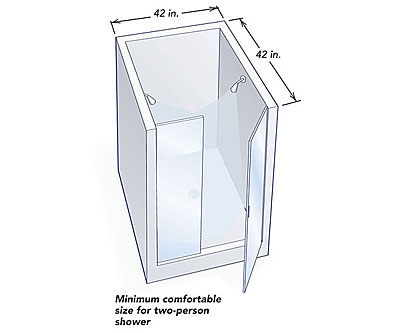 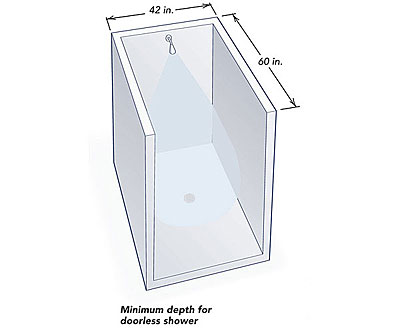 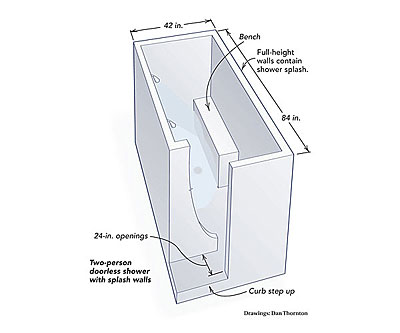 Large windows, an open-air room, and other architectural elements make for a versatile and beautiful retirement home.