Learn how to use a router in combination with a simple ramp to produce period-accurate fluted columns.

Victorian-style homes are mostly Greek-revival styles dressed up with Gothic ornamentation. One ornamental detail carried from Greek temples to Victorian-era design is the fluted column, which was often reincarnated as a flat pilaster. In renovation or restoration work, cutting the flutes is a necessary evil that makes reproduction possible. Along with the size and spacing of the flutes, you have to think about how they terminate.

I know of three ways to cut flutes with a router. The most common method creates a stopped flute that correctly echoes the classical example. But router bits often burn the stock when they stop moving forward at the end of a flute, unless the last pass is made at a very minimal depth. If the stock is finish-grade, a burn means extra time spent sanding.

To avoid the burn, some carpenters prefer to cut continuous flutes that run straight from plinth to cap. The result is a flute that stops abruptly without a terminating cove.

The third method is to taper the depth of the flutes as they terminate. Unfortunately, tapered flutes don’t really fit with most traditional Georgian- or federal-style details. But they work great on Victorian trim because they have the right Gothic feel, especially if you use a chamfer or V-groove bit (rather than a core-box bit) to cut the flutes.

In his article “Router Bits I Can’t Live Without” (FHB #173), Jim Chestnut figured out a way to taper the depth of the flute at each end to avoid the burn. He used a ramp that was screwed to the stock and a router fence.

I took that idea and made a router sled with two adjustable fences that I can register to any width of stock. In turn, the stock is held in place on a plywood table. Ramps and stop blocks located at each end of the stock provide the setup for cutting the tapered flutes.

To estimate the ramp geometry, I drew the rise and run on a piece of stock. I wanted the tails of the flutes to be about 4 in. long (the run) and the cut to be about 3/8 in. deep (the rise). I found that I didn’t need to cut it to a sharp point. For instance, when fluting 3/4-in. material, the ramps should measure from about 1/2 in. tall to just over 1-1/8 in. tall (3/4 in. [thickness of material] + 3/8 in. [rise] = 1-1/8 in.). I cut the ramps longer and therefore taller, extending the angle of the ramp just to raise the bit before it enters the stock, because I hate accidents. I also cut the ramps from PVC trim so that they’d be slippery.

I registered the fences against the stock, then passed the router down the ramps along the length of the stock and up onto the ramps at the other end. I emphasized the length of the tapers so the flutes would slowly climb out of the stock. My advice is to cut several pieces of MDF to match your intended trim pieces and to make sure you have the whole system dialed in nicely before cutting hardwood. Like any production method, most of the time is spent on setup. 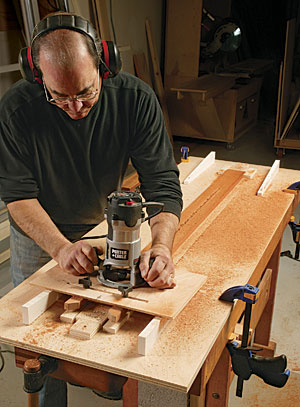 Stop and start to cut the outer flutes

Tool of the Trade: Variation on a Theme 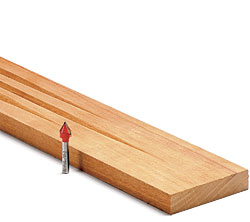 Traditional flutes are cut with a core-box bit that produces the characteristic rounded profile. They’re the bit to use on federal- or Georgian-style trim. However, I’ve found that a 60° chamfer or V-groove bit does a great job when used on Victorian details. The bits are also available in angles from 15° to 90°, which allows a fair amount of customization. Prices for good-quality bits can range from about $20 to $60.

To register the stock so that the outer flutes are shorter than the center, remove the spacer at one end and pair it with the spacer at the far end, which pushes the stock toward the nearer stop block.

Adjust the fences so that the router is set to rout the outer flutes; be sure to stop the router in the middle of the stock.

Next, remove the spacers, push the stock forward against the farther stop,

and continue routing the flute.

Repeat the process for the opposite side. 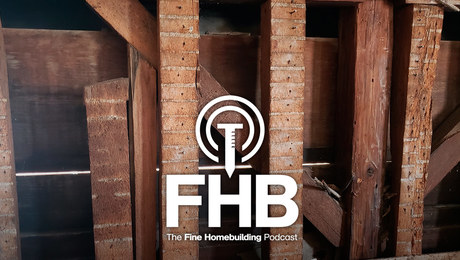 Kiley, Matt, and Patrick hear from listeners about wood-fiber sheathing, humidifiers, and heat-pump water heaters before taking questions about how to demo a rickety carport, what to do about subslab ductwork, and how to insulate old walls without sheathing.