EcoVillage Ithaca, a co-housing community founded on the premise of sustainable living, is one place where the concept of net-zero “ready” homes should work.

It’s a little too early to tell whether the owners of most of the 25 new single-family homes in the third phase of the community will modify how they live to consume as much energy as their photovoltaic-powered homes produce. But one owner has reached the summit, with minimal sacrifice.

“When he gets cold, he just invites over a bunch of friends or bakes cookies,” says Liz Walker, co-founder the community, started in 1991 on a hilltop perched above Ithaca, New York. “We’re getting to net zero through a lifestyle commitment.”

A bevy of cutting-edge energy details–the homes are designed to Passive House standards–brought the homes down to a HERS (Home Energy Rating System) value of 56. An optional 4kw PV system, which most buyers have elected, reduces the HERS to 15. And a smart-metering system, coupled with homeowner willpower, can take the homes to net zero or beyond.

The new neighborhood, dubbed TREE (Third Residential EcoVillage Experience), is the largest collection of Passive Houses in the country, according to the Passive House Institute USA (PHIUS). Through November 2014, the Institute listed only 124 certified homes.

Seven of them are at TREE. “We would have gotten more homes certified, but it’s expensive–about $3000 to $4000 per house,” says Jared Jones, who oversaw the project for the co-housing association. Jones provided a walking tour of the new community in mid-November.

The community plan for TREE, as with the previous two neighborhoods at EcoVillage, dispenses with streets and driveways to connect houses. Instead, the 25 single-family homes, along with a 15-home apartment building and common house slated for completion next summer, are clustered around shared open space with gravel paths. Cars are relegated to inexpensive corrugated sheds on the periphery.

“One of our residents, an astronomer, recommended the path lighting,” says Jones, noting that it doesn’t interfere with views of the night sky. “He runs a group of senior astronomers. They call themselves the Stargeezers.”

The residents of EcoVillage, many of them aging baby boomers, wanted the homes to be as accessible as possible. There are no front stoops. The homes include first-floor bedrooms and baths. Thresholds are kept to a minimum. Cabinets and fixtures are within easy reach.

The community tried to hold down construction costs, knowing that adding energy details such as European-made, three-pane windows wouldn’t be cheap. Architect Jerry Weisburd designed four basic plans that range from 425 sq. ft. for a studio to 1440 sq. ft. for a four-bedroom house.

Living within a smaller home, with a smaller carbon footprint, was also part of the agenda. Flipping floor plans and alternating siding colors provide variation within the community. Only limited customization was offered to hold down costs.

Michael and Kendall Carpenter, a father-and-son home building team who have been on the forefront of energy-efficient construction in Ithaca for 25 years, managed to bring in the homes for less than $100 a square foot in construction costs, excluding land.

The lack of air-conditioning units – residents find it is rarely needed on a hilltop that stays 10 degrees cooler than the valley below–provided some savings. Opening windows and running ceiling fans should to trick in homes this tight, even on the hottest summer days. Passive solar gain is the main source of heating, backed up by inexpensive electrical baseboard units of 6 to 9 lin. ft.

In addition to strategic shading, the Passive House standard calls for a high level of envelope insulation. The architect and builder decided to meet the criteria with a double-wall system. Two 2×4 walls, with studs spaced 16 in. on center, were built 5 in. apart, creating a one-foot-thick wall cavity filled with insulation.

The advantage to building double 2×4 walls, as opposed to more esoteric walls systems, is that framers are accustomed to them. Even so, some energy details within the walls threw the trades for a loop. Blower-door tests were used frequently during early stages of construction to identify and eliminate heat loss.

“The first home was the hardest, but we got the hang of it after a while,” said Michael Carpenter, noting that crews found themselves going back into wall cavities, feeling around for leakage during blower-door tests, and applying sealants in places they had overlooked.

“Based on where the houses were leaking,” says Jones, “we thought backwards to figure out how we could change the framing and other sub-assemblies to take care of the problem or improve our ability to fix it after it was built. Some leaks were identified that were hard to retrofit and that situation spawned all kinds of engineering changes to the building process.”

The wall assembly doesn’t include a vapor barrier. Instead the exteriors were cloaked in OSB then sealed with tape. Pine furring strips, installed over the OSB, provide a rain screen and create an air gap.

The inner surfaces of the walls were sprayed with 3-1/2 in. (R-22) of high-density closed-cell spray foam; the remainder of the cavity filled with 8-1/2 in. of (R-30) blown cellulose. The combination of foam (for its high R-value) and blown-in insulation (for its comparatively low cost) is an increasingly popular solution.

Additional OSB was applied skin side down on the house-facing side of the roof trusses. The seams were taped on the house side and caulked on the attic side to provide a continuous air and moisture barrier.

Furring strips on the underside provide a nailing surface for drywall and create a false ceiling with enough space to run wiring across the ceiling without penetrating the OSB air barrier.

Five and half inches of polyiso insulation was applied under the entire slab. It was laid over a 6-in. layer of gravel and a 6-mil polyethylene vapor barrier. As a precaution, a passive radon-venting pipe was installed in the gravel with a vent stack through the roof.

The outside of the concrete foundation was covered with three inches of foil-faced polyunsaturate (R-19) insulation, extending to 24 in. below grade. To protect the slab from frost, an additional 3-in.-thick skirt of polyunsaturate was extended down and out 41 in. from the bottom edge of the footing.

The shallow skirt–frost depth in Ithaca is 48 in.–provides adequate frost protection for the slab footing, at a reduction in excavation costs, according to an analysis of the plan by the Department of Energy. Dirt was backfilled over the skirt and packed to slope away from the house.

Windows are often the weakest part of the building envelope. The homes at TREE employ triple-pane, argon-filled windows that carry an R-value of more than 7. Low-emissivity coatings achieve a U factor of 0.13.

Passive House standards require the use of heat-recovery ventilators, which recycle heat even as they bring in fresh air. Installed in an upstairs closet with two vents to the outside, ventilators remove stale air from the house and vent fresh air into the primary living areas.

Incoming air passes through a filter before it’s distributed through 6-in. ducts that run between the first and second floors. Ducts bring air to the living room and bedrooms and exhaust it from the bathrooms and kitchen.

The group ran into trouble meeting a Passive House requirement for at 9 in. of blown insulation over the top plates. The north-facing roof pitch didn’t leave enough room.

Carpenter came up with a work-around. Baffles were installed at every rafter bay. They not only kept insulation from blocking the soffit vents but also provided a backstop for spray foam. Then high-density, closed-cell spray foam was used to provide insulation over the top plates and an air seal.

After that, 25 in. of blown cellulose was piled onto the attic floor to provide R-90 of insulation for the vented space. The space was so energy-tight that a metal roof could be installed directly over the rafters with no roof decking underneath.

The homes were built so tightly that they achieved a 0.42 air changes per hour (at 50 Pascals pressure difference), beating the very tight Passive House standard of 0.60. Stephen Winter Associates, the engineering firm on the job, calculates that annual heating costs will amount to a mere $275 per home.

TREE received a Housing Innovation Award this fall from the Department of Energy. The award was especially gratifying for the co-housing community, given that it’s not your typical developer of net-zero ready homes. “If we can do it, I think anybody can,” says Walker. 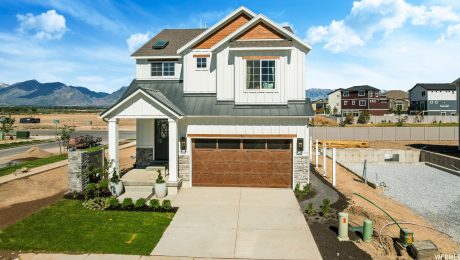 Reflecting on The House That SHE Built

Built with nearly 90% female labor, the completion of this Utah home emphasizes the exciting potential of women in the residential building industry.