Located along Maine’s rocky shores, just south of the Canadian border, this rustic home—designed by Whitten Architects—is a direct response to its site and context. Tucked into a thicket of trees and subject to coastal New England’s winds, rain, and snow, the house was built with durability and longevity in mind. But more than that, it “represents an intersection of paths—the old and the new, the well-worn and the just-beginning.” In other words, it has a compelling backstory, which itself is an important component of the firm’s approach to site-specific design. 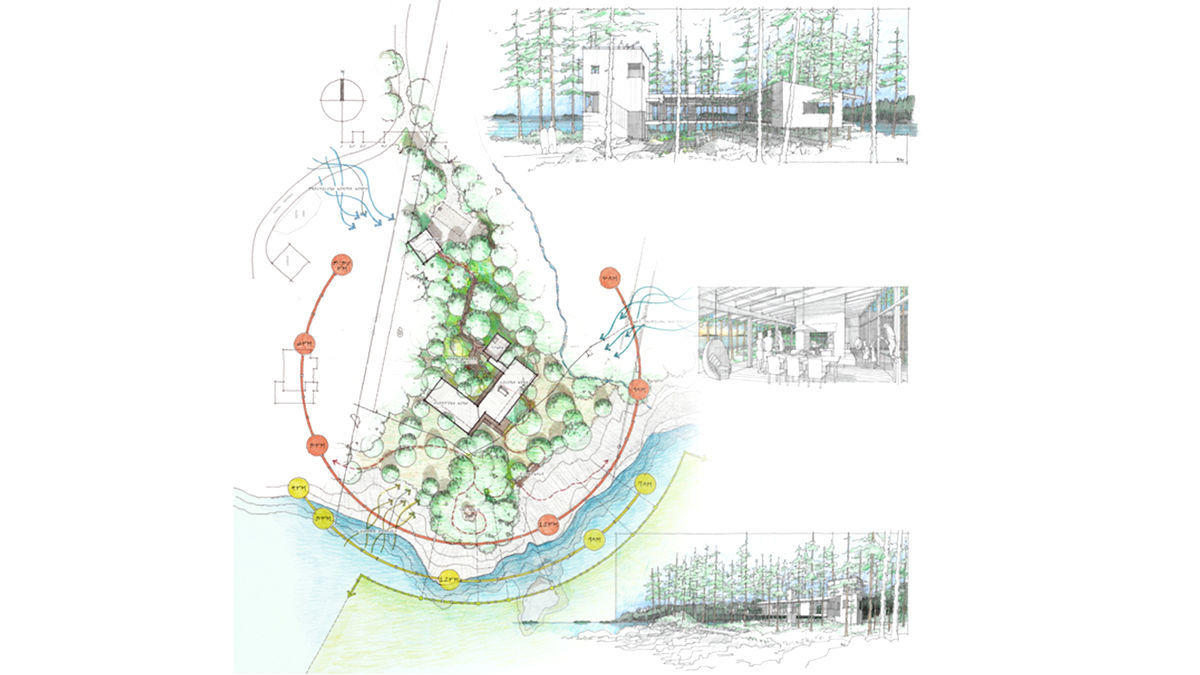 “Our design methodology is aligned with the idea that every project is derivative of the site and the client,” says Russ Tyson, lead architect on this Englishman Bay Retreat project. “Our initial goal is to always design so that we are not working against nature.” 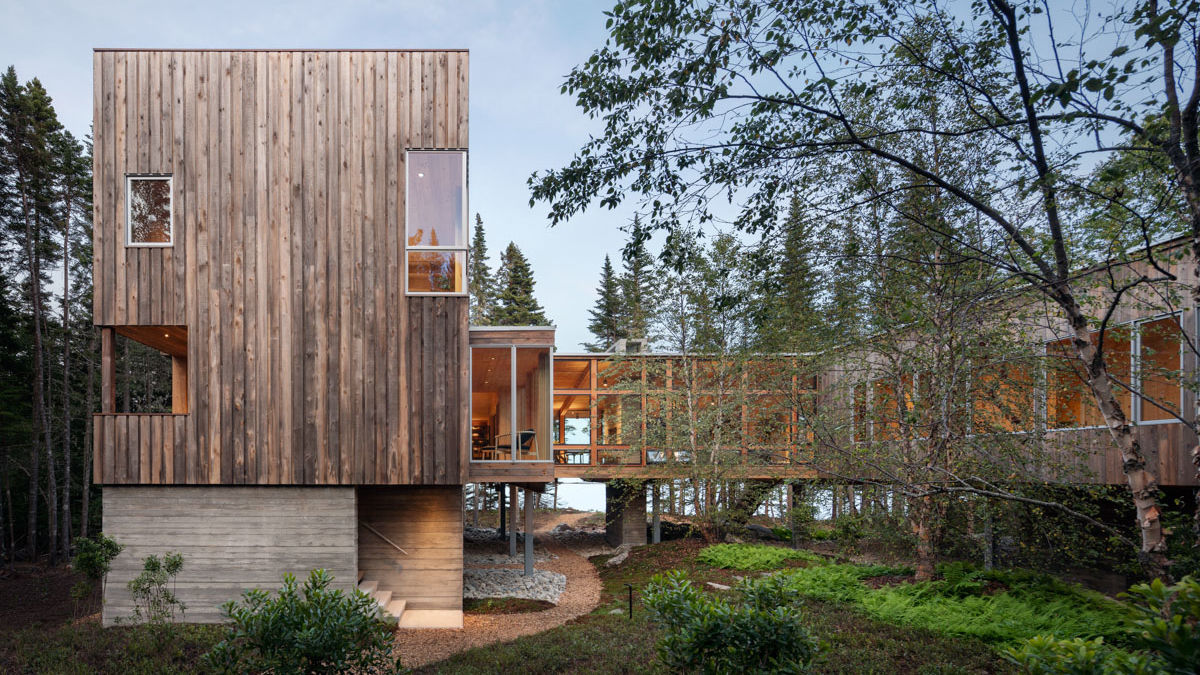 It follows, then, that this rugged house of simple forms stands elevated on steel columns above the rocky ledge that distinguishes the property. The decision to raise it avoided the need for extensive excavation and tree removal, plus it will support a mature landscape. “The idea was that over time, the forest floor will grow back in beneath the building,” Russ explains.

It also created an opportunity to celebrate the site’s history: As a child, the client used to walk along a wooded path from his family’s camp—located next door—to a nearby pebble beach. Now, with children of his own, he wanted to locate the new home close to that same path. Arguably the most distinct feature of the house-landscape relationship is the pedestrian circulation beneath the building. “The home itself has become part of the path to some degree,” Russ notes. “It’s a tributary off the main path.” 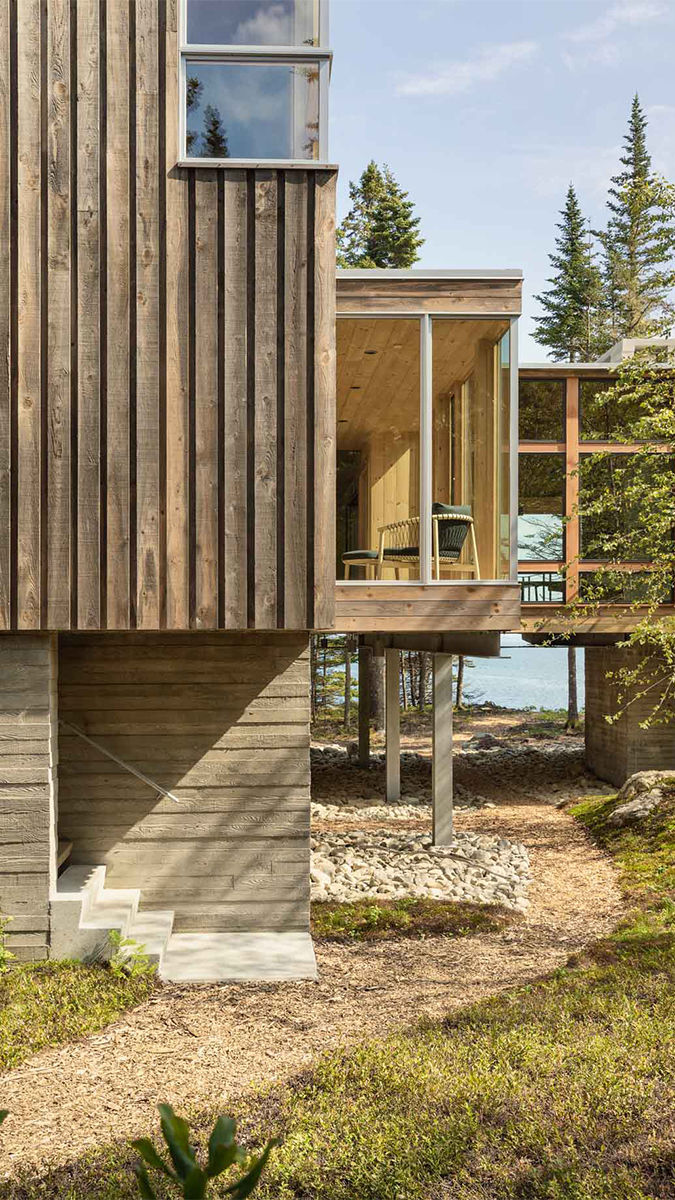 Respecting the natural terrain, the house connects the shady wooded areas to the exposed waterfront. Anchored on one side by an entry tower, the U-shaped structure frames an outdoor courtyard, enhanced by the close proximity of trees. The distance between house and grade varies from 7 ft. to 10 ft., though the building does meet the ground in a few strategic places including the entry stair and the section that houses the mechanicals. Both are clad in board-form concrete, which lends texture and weight to the overall mass.

The majority of the house is clad in locally sourced eastern hemlock. In fact, many of the building materials are indigenous to Maine, including the eastern white pine used to clad the interior walls. “The hemlock was a mill-run product, which [made the price of the wood] reasonable—plus it’s native, local, and rot-resistant,” says principal Rob Whitten, noting that keeping the house off grade also prolongs its life. Of course, the use of natural materials—particularly those that will weather with a nice patina—is another way to tie the structure to the site. 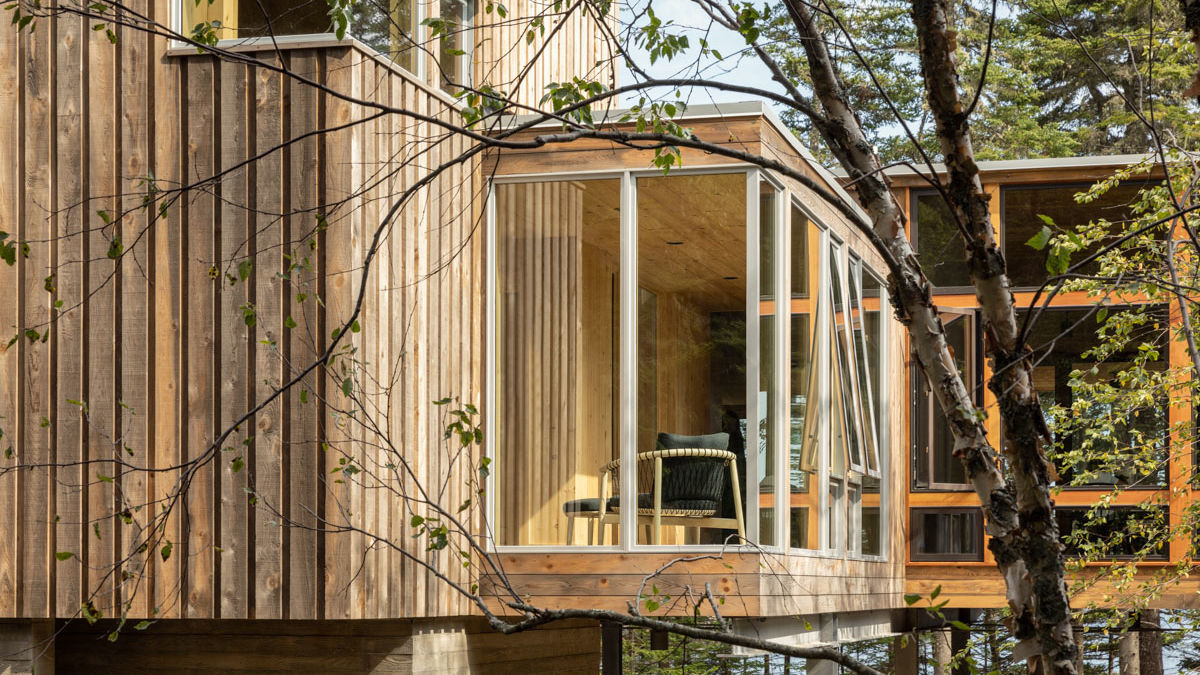 The middle portion of the house is intended to be a three-season room, whereas the conditioned spaces—to the right and left of the glass-encased center section—are meant for four-season living. “We are not trying to condition a space that would be difficult to heat in the dead of winter,” Rob explains. “We are being energy efficient by cutting the number of conditioned spaces.” Logically, the fully conditioned rooms don’t have as much glass. Other green building strategies include
low-e glazing, closed-cell spray-foam insulation, a rainscreen wall assembly, and a combination metal and EPDM rubber roof. 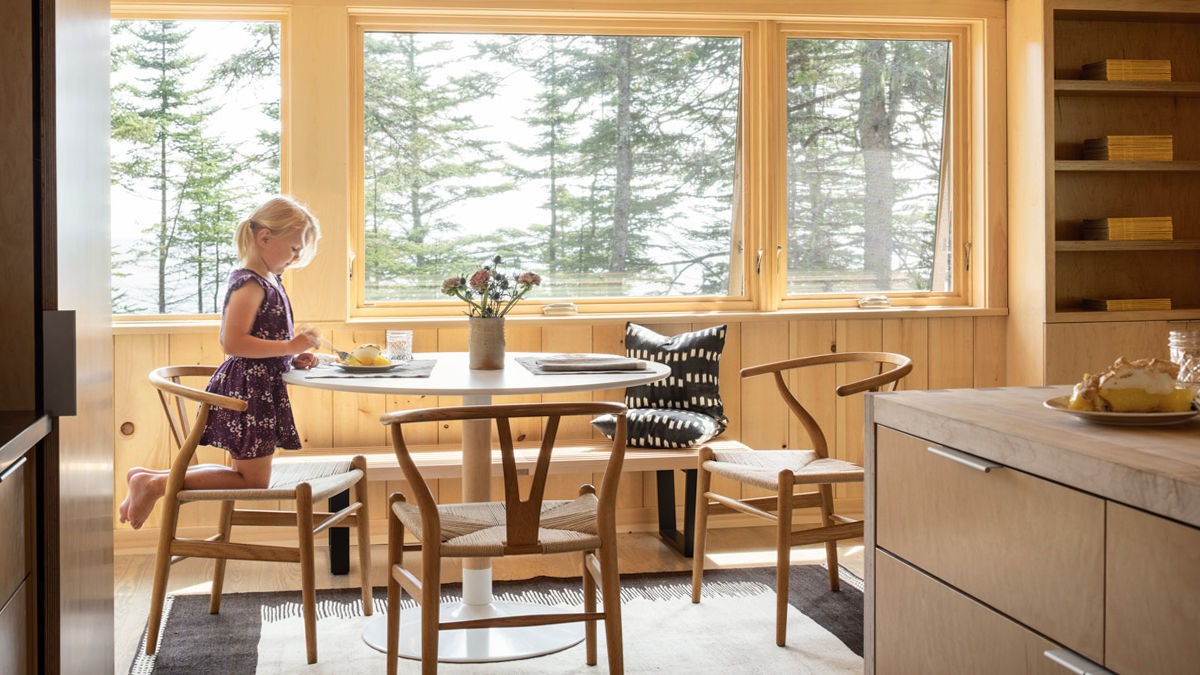 The interior spaces are arranged such that the sun follows the day’s activities. Eastern morning light bathes the kitchen, the main living spaces enjoy midday exposure, and the west-facing bedrooms receive the setting rays. “We try to lay out most homes that way,” notes Russ. Additionally, views are framed to capture the ocean, distant headlands, and sky. 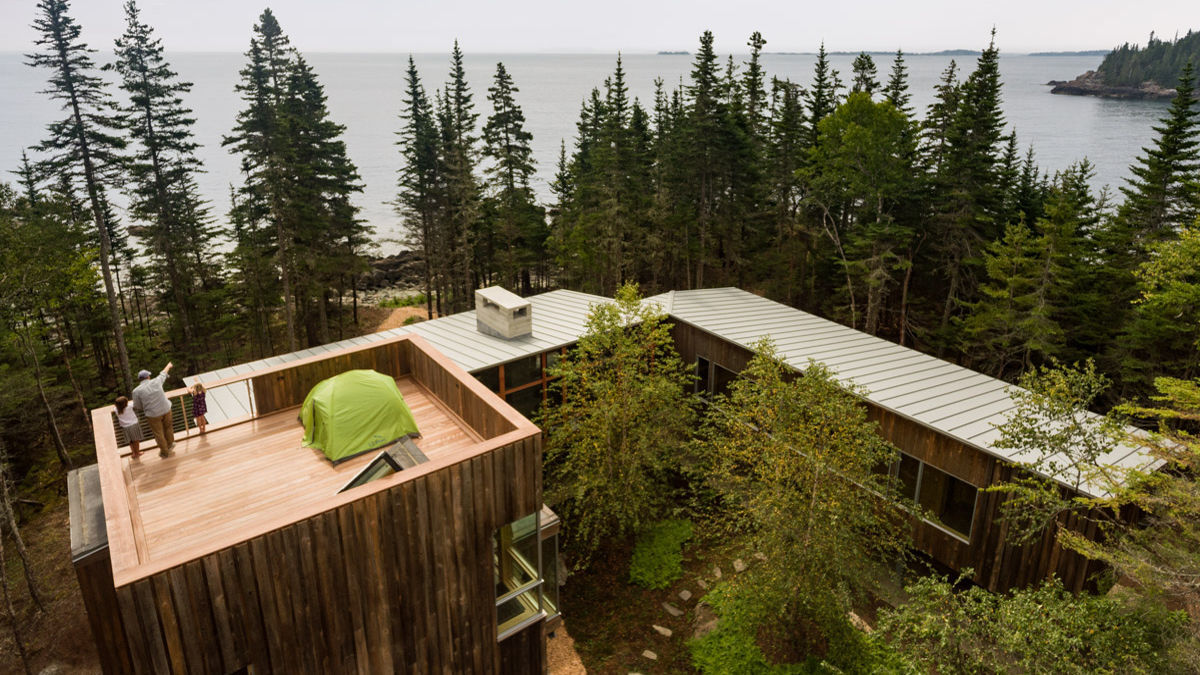 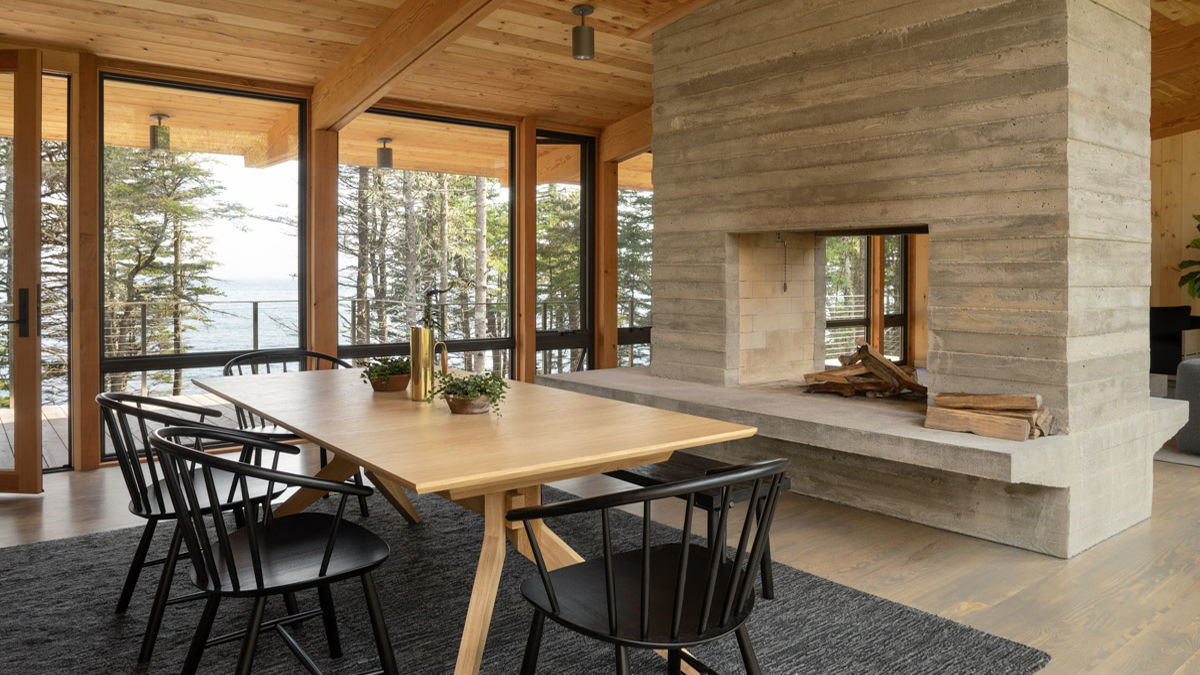 Key to the whole design was the inclusion of a hatch-accessible, open-platform rooftop deck, which was sited at the top of the entry tower to maximize views. Other notable features include the daylight-filled bridge linking the tower to the kitchen; a cantilevered balcony overlooking the path and beach beyond; and a cast-in-place, double-sided fireplace. 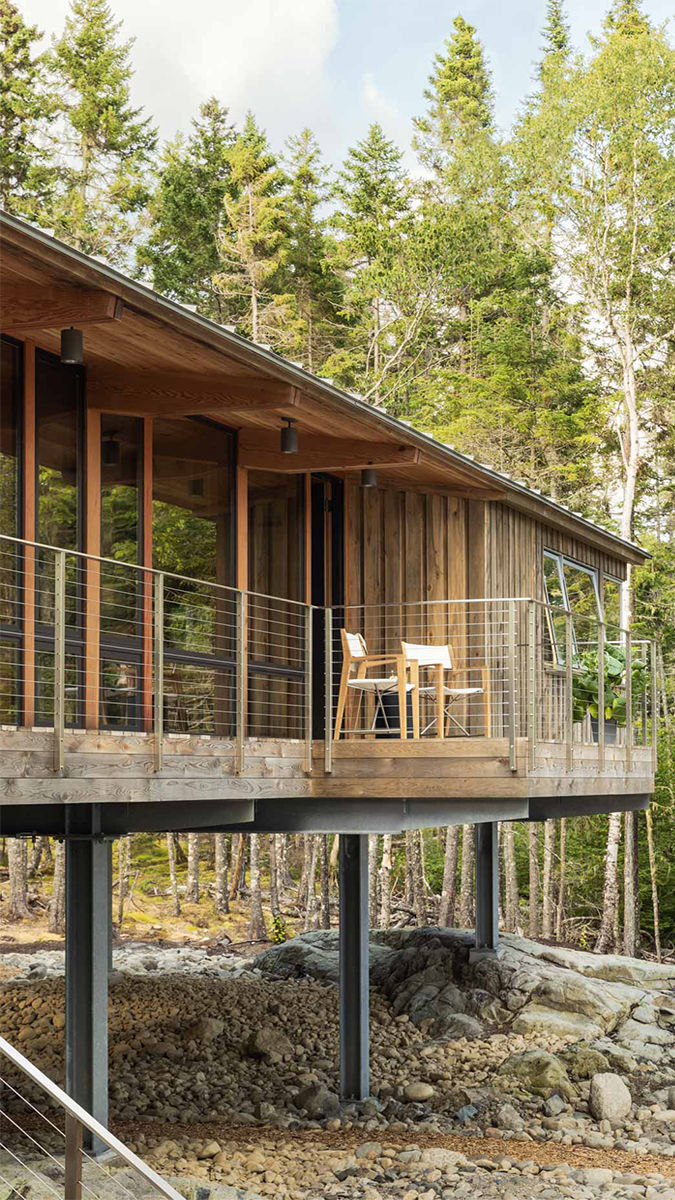 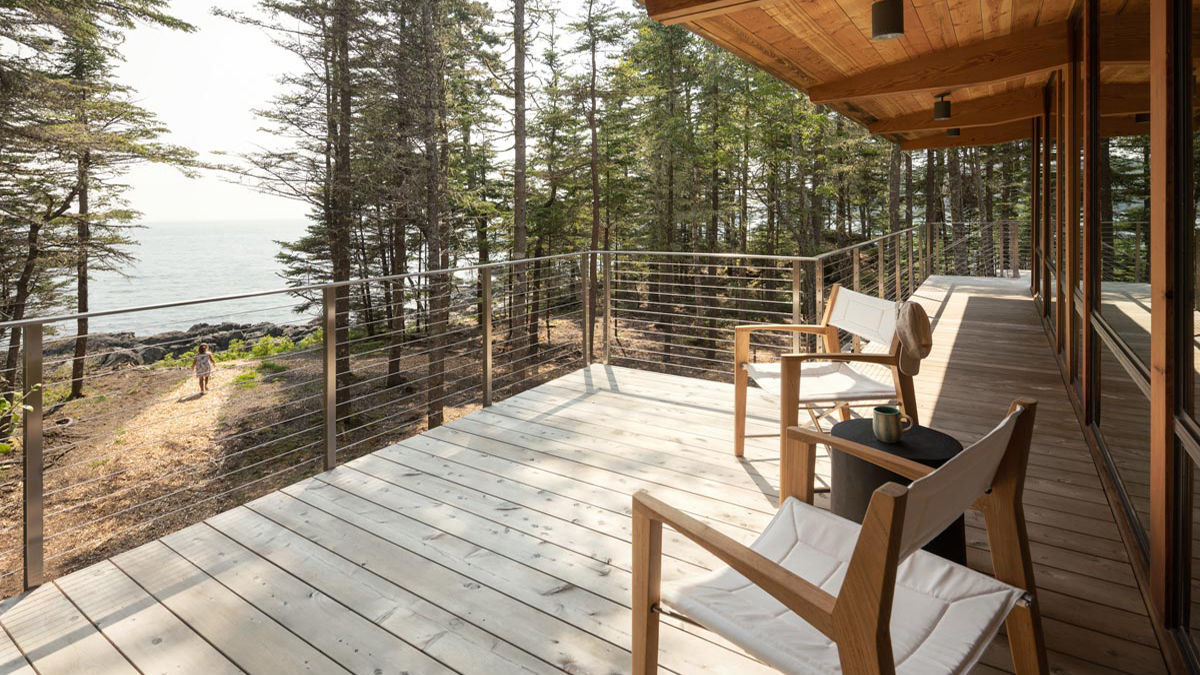 “If you listen carefully to why the client bought the property and what they love about it, as well as their concerns and its restrictions . . . you help them fully appreciate what they have as the design evolves in response to the site,” says Rob. Having done that here, Whitten Architects has graced a pristine setting with so harmonious a home it nearly disappears behind nature’s camouflage. 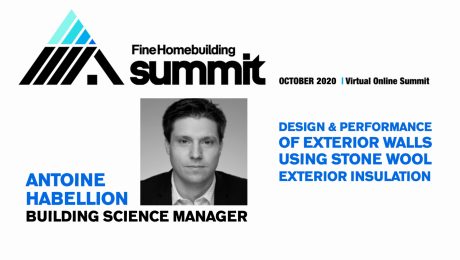 Why Should I Use Mineral Wool Exterior Insulation?