Synopsis: Habitat for Humanity is a nonprofit organization that sets its sights on affordability and energy efficiency. For project manager Dan Hines, making the commitment to constructing lower-energy homes is not only beneficial economically, but also improves the overall health of the homes’ inhabitants and the environment. From prioritizing airtightness and insulation values to meeting Passive House specs or working with other green organizations, Hines and Habitat for Humanity are making strides toward attainable, energy-efficient housing.

Dan Hines was waiting patiently in his Washington, D.C.–based office for a phone call. He could focus, but the energy in the room was amplified by the angst of a pending “big moment.” He and his wife had spent years living with housemates and saving enough money to buy their own home in a competitive market turned mad during the COVID-19 pandemic. In Washington, as in many other areas of the country, homes were (and in many cases still are) receiving multiple bids the day they went on the market. Dan was waiting to see if their offer, one of several, would be accepted. Like many home buyers, Dan and his wife were looking for a good house in a good area—something decent and affordable. In the back of his mind, the opportunity seemed fleeting.

For many Americans, that feeling is far too familiar. Financially, the opportunity to buy their own home isn’t viable or seems to be diminishing at increasing rates. Although homeownership in the United States currently hovers at roughly 65%, it’s lower than at most any other time in the past 20 years. The most recent real estate bubble is pricing out even those who might ordinarily have the means to buy or is pushing them into homes at a compromising price point. Fortunately, there are organizations working to close the gap, particularly for those most in need of safe and affordable housing.

Dan works for one of them. He is a project manager for Habitat for Humanity, the largest nonprofit organization that has made building decent and affordable homes its mission. Dan not only helps provide housing to those who may otherwise never experience the richness of home, but he also provides it at extraordinary performance levels.

Hands on at Habitat

In its last fiscal year, Habitat for Humanity provided safe, affordable shelter for nearly six million people across more than 70 countries. While most know of the voluntary commitment that these projects demand, including from the future homeowners, few understand the working dynamics of their builds and how closely they resemble standard residential-construction projects.

Dan’s job isn’t all that different from that of any other construction project manager. The only major difference is having to allocate the volunteer contribution into the project scope, being mindful of the timeline and budget. That’s not always an easy thing to do. The scale of the projects in the D.C. Habitat affiliate means that Dan is increasingly using subcontractors to keep job sites safe and the work on track. More and more multifamily homes are being built, some exceeding two stories. Volunteers, Dan finds, don’t like working that high.

Dan has figured out what jobs best suit most of his volunteers’ abilities. At times the less-skilled volunteer labor can actually help balance his construction budget to accommodate higher-end products and systems. For example, the Zehnder energy-recovery ventilators (ERVs) installed in some of the Passive Houses his team has built are expensive, but because their ComfoAir tube system is so easy to install, Dan was able to keep the budget down by having volunteers do the installation instead of contractors. Air-sealing and insulation work, where success is achieved by diligence and not necessarily experience, is also an area where volunteers shine.

Just because he’s deep in mission-driven construction work doesn’t mean that Dan is immune from the dynamics of the industry, though. Finding top-quality subcontractors is a challenge, especially when project funding is tied to municipal grants that have parameters on who and what type of businesses can be hired to conduct work. His projects are not completely volunteer-built. But whether working with pros or volunteers, he’s been successful in onboarding them to a performance-based mindset in order to ensure that projects hit their energy targets.

Dan is clear that the commitment to constructing lower-energy homes doesn’t stem from the homeowners. While they appreciate the energy-efficient measures from a cost-savings perspective, their priority is safety and affordability. Striving for performance is mostly based on Dan and his team’s drive and is baked into the economic aspect of the work they do. For the homeowners who occupy the homes they build, the mortgage is only one of the costs of ownership. Reducing their living expenses over the tenure of their time in these homes is important and holds the build team accountable for being mindful of the impact on the community in how the projects are constructed and how they endure.

Habitat for Humanity understands that and has mandates in place that homes being built under the Habitat network need to meet “some” green building standard. There is variation in terms of which programs builds follow, and to what degree efficiency measures are met, but the message is clear—if you’re a Habitat affiliate not building to a better and more efficient standard, you’re doing it wrong. Dan’s next build is using Enterprise Green Communities Criteria as a guide, but he’s always wringing as much performance out of his build budgets as possible and future-proofing his projects to accommodate renewables as they become more readily available.

The D.C.-based Habitat affiliate has eight certified Passive Houses in its build portfolio. It was deeply involved in building the Empowerhouse, the acclaimed project generated for the Department of Energy’s Solar Decathlon in 2011 by design teams from New Jersey’s Stevens Institute of Technology and New York’s Milano School of International Affairs, Management, and Urban Policy, and The New School of Design. Habi­tat partnered with the teams to move the competition model and complete it, and it built an identical version next door in the Deanwood area of D.C. Priced below $250,000, the home took top hon­ors in the affordability category and served as a case study for a pragmatic approach to environmentally and socially responsible building. Dan and his colleagues have built six additional certified Passive Houses since and are always vying for the opportunities to get their ongoing projects back to the standard.

For the area’s moderate climate, Dan’s Habitat projects prioritize airtightness and insulation values. Habitat has a strong relationship with Dow and receives donated insulation materials. Dan has been using denim batts for cavity insulation and XPS exterior insulation due to its relatively high R-values, but he has concerns about the carbon footprint of foam-insulation products. While it’s difficult to turn down donated products, he’s exploring alternative exterior insulation options for future builds, including reclaimed XPS, and is particularly drawn to developments in wood-fiber options.

Two critical assembly details are important to achieve approximately 90% energy savings over conventional code-built houses: energy recovery and windows that meet Passive House specs. Those keys details need to be done within a Habitat budget. Before the pandemic, the price of ERVs was coming down, so Dan was working on swapping his approach to heating, cooling, and ventilation—which typically relies on a two-zoned minisplit with fresh air provided by an Aprilaire system—without raising construction costs and budget scrutiny within Habitat. Efficient, high-R-value, Passive House–certified windows are becoming more domestically available, and their prices are coming down. Despite the falling costs, though, Dan and his team have yet to be able to make the numbers work. But they’re constantly adjusting window placement, size, and type to try to integrate them.

Dan knows that resiliency in housing is important and that the housing stock to which he’s contributing needs to be built in a fashion that takes advantage of opportunities to curb energy consumption when they present themselves. Incentives for solar installation, when available, are typically available to homeowners rather than builders. There are also organizations like Grid Alternatives that focus on offering PV to low-income families and fit well within the Habitat program. Accordingly, every house the D.C.-based affiliate builds is solar-ready and prewired, with junction boxes installed near the roofline and labeled for future connection. The homes tend to be compact, and building in urban lots doesn’t always yield the best exposure, but they are oriented for solar as much as possible to help the homeowners reach as close to zero energy as possible, when possible.

In April, Dan and his wife closed on their first home together, starting a new chapter in their lives. Through his work with Habitat, Dan has been able to help provide the same experience for countless families in communities from California to the Carolinas and across Washington, D.C. With each home-closing comes the opening of a new opportunity, both for the families who will go on to own the houses and for the communities who will bear witness to a better way of building for all.

-Rob Yagid is a former editorial director of Fine Homebuilding and the founding director of Keep Craft Alive.

Photos courtesy of D.C. Habitat for Humanity, except where noted. 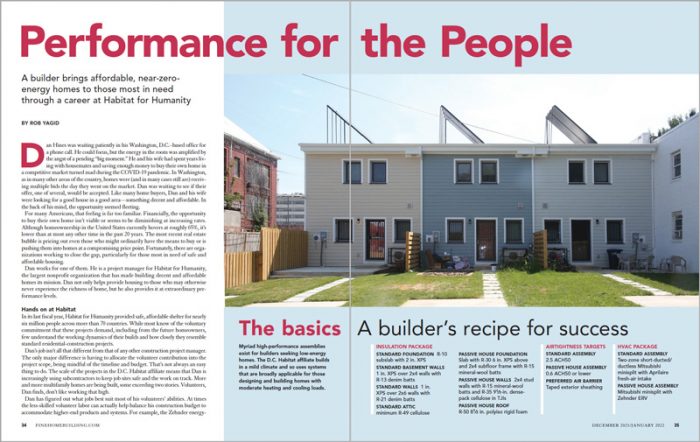