Have you ever noticed how pulling the shower curtain back in a small bathroom gives the room a lift? It’s like turning on a light after a long blackout. More and more designers these days are ditching shower curtains and traditional shower doors in favor of wet areas with floor drains. It’s like leaving the light on without burning a bulb. Here are four of our favorites.

Editor’s note: Though some of the aesthetic details in this article are a bit outdated, the design concepts are timeless, so read on for some great inspiration for any small bathroom project.

There were lots of things to like about the 1970s-era house that Mick and Sally Singer bought, but the suite bathroom wasn’t one of them. It was divided in two parts separated by a solid pocket door, and they had to walk through the lavatory half to get to the bedroom. To top it off, it was carpeted—a mold bomb in waiting.

The couple had three primary goals on their list of bathroom improvements: an entry to the bedroom that didn’t pass through the bath; his-and-hers vanity sinks; and a shower.

Creating an entry meant reworking the closet, a task that Singer, a professional woodworker, took on with relish. Carving off part of the bath for the hallway left little room for his-and-hers vanity sinks, and there wasn’t much room to colonize on either side of the remaining lavatory. 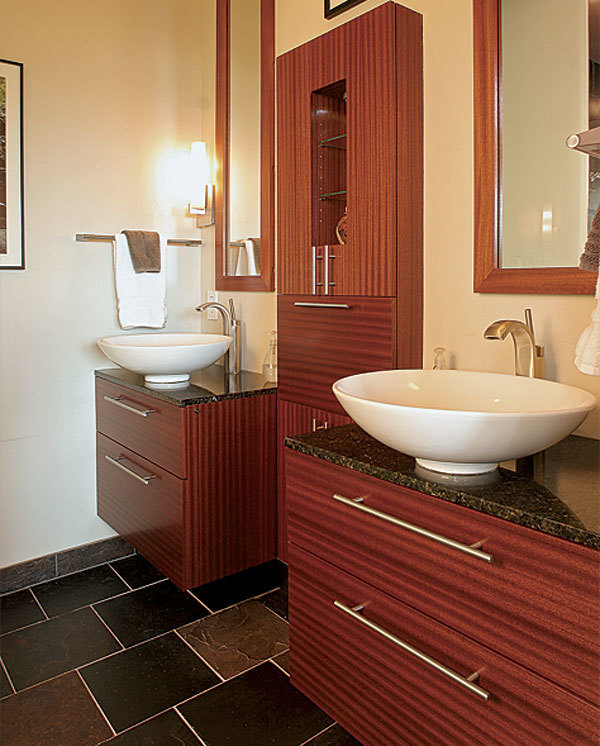 This is when stock in the 11-in.-deep linen closet on the other side of the sink wall started to go up. Annexing that space provided just enough room to place two vessel sinks on the new north wall, solving the vanity problem.

The tub was a big soaker that they didn’t need. Replacing it with a 30-in.-wide tub and moving the toilet a few inches north made room for a 36-in.-wide shower. To keep all these elements from balkanizing the bath, the Singers eliminated unnecessary partitions, used glass where partitions were necessary, unified the floor level with no shower curb, and kept a contiguous ceiling throughout. The garden window draws the eye outside and provides a shelf for plants.

Above the shower, an oculus fills the room with daylight and houses indirect light fixtures. For bathroom privacy, a frosted-glass partition next to the vanities teams up with a frosted-glass sliding door to create a two-room bath, daylit through and through.

Like the other rooms in this Victorian row house, the old back porch didn’t have a lot of details worth saving. It did, however, have location on its side. After transforming their parlor into a sleek new kitchen (An Elegant Kitchen on a Budget from FHB#223), Alex Nerland and Lisa Signoff turned their attention to converting space formerly occupied by the old kitchen and the porch into a bedroom suite. They gutted the porch, relocated the stair to the backyard, and devised a plan to get a shower, a full-size tub, a double vanity, and the toilet all into a flag-shaped space of about 70 sq. ft.

The couple’s goal for the kitchen—high-quality finishes and fixtures for the best possible price—became their goal for the bath as well. With Alex doing the work, they had about $6000 to spend on fixtures and materials. Here are the highlights.

Ipé duckboards over a floor drain lead to the doorless shower in the corner opposite the bath. High transom windows and a wavy-glass panel between the shower and the entry even out the daylight.

Tuck the shower in the corner

Ipé duckboards over a floor drain lead to the doorless shower in the corner opposite the bath. High transom windows and a wavy-glass panel between the shower and the entry even out the daylight.

As suite bathrooms go, this one is about as compact as they come. In a space just 7 ft. by 9 ft., it manages to fit a 6-ft. tub, a separate shower, a vanity sink, and a dual-flush toilet. A suspended-glass partition separating the shower from the toilet enables the wet areas to coexist with the dry despite the tight quarters.

A generous mirror at the sink, a clerestory window over the tub, and custom wood shutters to the adjacent bedroom create a sense of openness. The shutters pivot on vertical axles, opening to the adjacent bedroom for ventilation and light when privacy isn’t an issue. They are held in the closed position by rare-earth magnets in the top and bottom jambs that align with magnets embedded in the top and bottom rails of the shutters.

The bath’s focal point is the glass-mosaic tub apron. Its pattern is a custom gradient of four colors that transition from lighter to darker. The dark-gray ceramic floor tile turns the whole room into a shower pan with a gentle slope to the brass floor drain. An electric radiant-heat mat beneath the tile floor keeps it toasty. (For more on bathroom heating, see Cost-Conscious Heating for Remodels from FHB’s Kitchen & Baths 2011.)

Fabricated from cherry-veneer plywood, the vanity cabinet is cantilevered from the wall so that water can flow beneath it. The vanity is topped with a counter that is composed of 75% recycled glass. It sparkles in the light.

From storage to suite

The owners had a garage full of junk and an underused storage room, and they needed a ground-level suite. Filling in the missing corner of the building with new construction and laying claim to the storage/garage space yielded room for a suite and a downsize garage for kayaks and motorcycles.

Thirty years ago, a soaking tub was a good idea at Lubov Mazur’s house. Three decades later, though, the inevitability of aging in place was starting to take hold. To make possible visits from her parents in their 90s, Mazur decided to gut the old bath and make a new, improved accessible bath. Its centerpiece would be an accordion-style shower stall, with frosted-glass doors that fold back against the wall to make the modest 6-ft. by 7-ft. space seem as generous as possible.

The first order of business was to find hardware to make a folding shower stall. It showed up on the Wilson Glass Company website and in their showroom in nearby Berkeley, Calif., where Mazur could look at and play with the parts. She found double-swivel rollers pivotal to making the bifold doors work. Riding on a track wall-mounted at the ends and hung from the ceiling in the middle, the rollers support the weight of the doors without requiring any curb or track at the floor. Retracted against the wall, the doors protrude a mere 3 in.

An angled cabinet keeps the floor open, with drawers offset to maximize useful interior space. The drawers pull out at an unexpected angle to prevent interference with the shower doors, and the sink is a surface-mounted bowl to maximize counter space.

Mazur reports that the bath is easy to clean and maintain. A squeegee takes care of the glass and stall floor, towels dry fast on a warming rail that also provides heat for the room, and PVC trim takes the worry out of wood trimwork in a wet environment.

Two pairs of 20-in.-wide doors pivot on track-mounted rollers to create a 40-in.-sq. frosted-glass shower enclosure. The folding doors and curbless shower allow easy access for a bather in a wheelchair to transfer to a bath chair.