A sloped mortar bed should be installed first, no matter what the inspector says.

Bathrooms have become the spa of the home, and it’s about time. We spend a lot of time in our bathrooms and do a lot messy stuff in there. Why not make bathrooms as inviting and relaxing as possible. Manufacturers are not holding us back, offering an abundance of stunning materials, like copper shower pans, to make the bathroom experience exceptional. The thing is, built into the beauty of a bathroom has to be a remarkable level of durability, and nowhere is that more important than the shower. Tiling a shower is a project that requires the utmost attention to detail.

On my current bathroom remodel, the building department wanted to inspect the shower pan. They required the drain to be plugged and the pan to be filled with 2 in. of water. I have to admit that this is the first time they had ever required a separate inspection of the shower pan. I have no complaints though, if you stand behind your work, it should pass a water test.

When the inspector arrived, he examined the pan and said that everything looked good. I used the Kerdi membrane, which is a topical waterproofing, on top of a mortar base. This means that any water that passes through the grout or tile never enters the mortar base as with a traditional PVC pan liner and clamping drain. It simply hits the Kerdi membrane and then travels through the thinset and into the drain.

Out of curiosity, I asked the inspector when would they want to inspect the shower pan if the builder was using a traditional PVC pan liner: prior to the secondary mortar bed being installed (after pre-slope and pan liner), or after the secondary mortar bed was installed? He told me that you only need one mortar bed, so you would schedule the inspection after that is installed. He said that you can install the pan liner directly onto the subfloor, float your mortar over top, and then install your tile. Adding, that the only way water would ever hit the liner is if the tile cracked or mortar bed failed, and this would be the tile installer’s fault.

I was shocked to hear this coming from an inspector. This is completely wrong. I have removed countless failing shower pans that were installed just that way (one even had worms living in it). I politely mentioned this to him, but he didn’t seem to budge, so I just shut my mouth (I had not received my approval sticker yet). Let me explain what is wrong with what he told me. 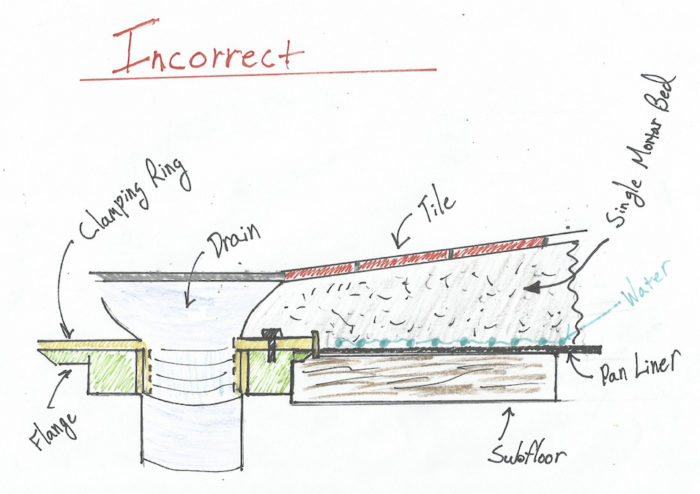 Here’s a list of problems with the installation above:

1) You would have to install metal lathe or reinforcement on top of the PVC liner risking possible puncture.

2) Once the water makes its way through the tile and/or grout (tile/grout are not necessarily waterproof) it will trickle through the mortar bed and hit the pan liner. If this pan liner is not pitched toward the weep holes in the drain assembly, the water has nowhere to go.

3) Once enough water saturates the mortar bed from constant use, it will weaken it to the point of failure. At this point the mortar bed will become completely saturated and begin to mold. 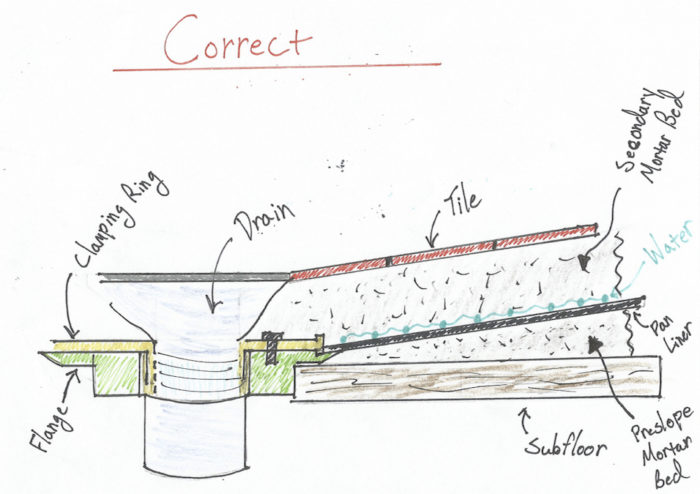 Here is why the above install is correct:

1) The metal lath or reinforcement can be placed over a cleavage membrane on top of the subfloor. It will never come into contact with the pan liner.

2) The pre-slope under the pan liner channels any water that gets through the tile and grout into the weep holes in the drain assembly.

4) The pitch for the shower floor is created with the preslope, and the secondary mortar bed is all a uniform thickness.

As mentioned I do not use this type of shower pan system, but many guys still do. I can quite honestly say that I have never removed one that was done correctly. The fact of the matter is that if it were done correctly, it wouldn’t need to be replaced. This is a major issue that plumbers, tile setters, and most of all, inspectors should be aware of. These types of shower pans are constantly getting a bad rap because of consistent failures. The truth is though, that if installed correctly there should not be any issues with using this type of shower pan. So the actual flaw in the system is with the installers and inspectors and their lack of knowledge, not the system itself.

Previous: Waterproofing a Window in a Tiled Shower Next: An Old-School Path to a Barrier-Free Bathroom