A multilayered cornice adds sumptuous detail to a room; careful preparation and a few tricks make the work easier.

Synopsis: A multilayered crown molding can add depth, detail, and elegance to a formal room. The trick is to spend time on design and layout, then build a solid foundation. Author Joe Milicia and his crew spend their days trimming out high-end houses in the New York City suburbs, and has plenty of techniques for design, layout, materials, and construction. Want to learn even more? FineHomebuilding.com Members can learn how to create mock-ups, build jigs for cutting and coping, cope inside corners, and seamlessly install crown molding by watching our series Video Workshop: Installing Built-Up Crown Molding with Tucker Windover.

For the past 14 years, I’ve spent my days building houses, mostly as a finish carpenter, and one of the most rewarding parts of my job is installing built-up crown, also called a cornice. To the untrained eye, a big crown is just another texture, but anyone who has built it knows that the process is more like building a cabinet than nailing up window casing and that most of the work remains hidden.

Because I run a crew (and sometimes an entire project), I spend less time with a hammer, but I still enjoy the work when I can get to it. Many of our projects are high-end houses in the New York city suburbs, so it’s not unusual for us to devote a couple of months just to the interior trim. In addition to a typical package of tall baseboard, wainscot, and two-piece casings, we often use a built-up crown detail that includes soffit, fascia, and frieze boards along with crown and bed-molding profiles. A multilayered cornice in a room with high ceilings evokes a solidly traditional, even classical feel that many of my clients look for in a new house.

Mock-ups and design: an unbeatable combination

We start most of our jobs with drawings, but I still think a mock-up is the best way to settle on the final design. Mock-ups allow me to confirm with an architect or a homeowner exactly what they want and whether the proportions are correct. If the design works, we use that winning mock-up to confirm blocking dimensions and to settle on a materials list.

I make two types of mock-ups. The first is made of short pieces that I use to get all the parts and locations right. Once I’ve settled on a profile that I think will work, I build a larger version, usually about 12 in. to 18 in. long, that I can tack onto the wall. With two or three mock-ups on the same wall, my clients and I get a good sense of what’s going to work in that room.

A good layout keeps you out of trouble

The layout method is as important as the pieces selected and assembled. Initially, going over the locations gets us in touch with any potential problems like bumps and dips in the drywall, as well as window and door heads that aren’t exactly parallel with the ceiling. Catching these problems early saves a lot of aggravation later.

One of the ways I’ve found to offset bad drywall is to select crown profiles that allow me to make inconspicuous scribe cuts. Working from the mock-up, we cut pieces of plywood to the measurements indicated for the projection and the drop, then go around the room and use gauge blocks to scribe reference marks. Chalklines connect the dots. To minimize mistakes, we use red chalk to show where the blocking goes and blue chalk to delineate the actual extent of the built-up crown.

Broad reveals are another consideration associated with profiles. When there’s a broad distance between the edge of one molding and the profiled section of an adjacent molding, we have room to make field adjustments that are less conspicuous.

For example, if the ceilings and doors run out of level, we often like to show a reveal of 2 in. or more on the fascia above. The extra blank space allows us to make less perceptible adjustments that don’t affect the detail. Another adjustment is to change the reveal of the head casing to mirror the out-of-level ceiling.

We seldom have been able to complete a room without splicing material, so another preparation is to map out the splices and copes. We try to order the longest lengths of stock available, then place any splices on the least noticeable wall, such as above the doorway.

If I’ve made an accurate mock-up, I’m usually able to fabricate a cutlist of blocking materials. I like to use plywood because it holds fasteners well and is dimensionally stable. Once I have all the parts, I go around the room in a sequential order: Snap all chalklines, install all cleats, then start the moldings.

After the red chalklines have been snapped, we put up the ceiling and wall cleats, which are ripped from 3/4-in. birch or 1/2-in. AC plywood. To give the nails extra holding power, we usually use one of the newer urethane construction adhesives; they’re really tenacious. Lately, we’ve been using PL brand (ositoughs.com). At some point, we also make up L-shaped sections of AC plywood. Nailed to cleats, the plywood box provides solid backing and molding-installation surfaces that are plumb, level, and straight. This makes for easier copes and miters.

A stable foundation means fewer headaches and a better job 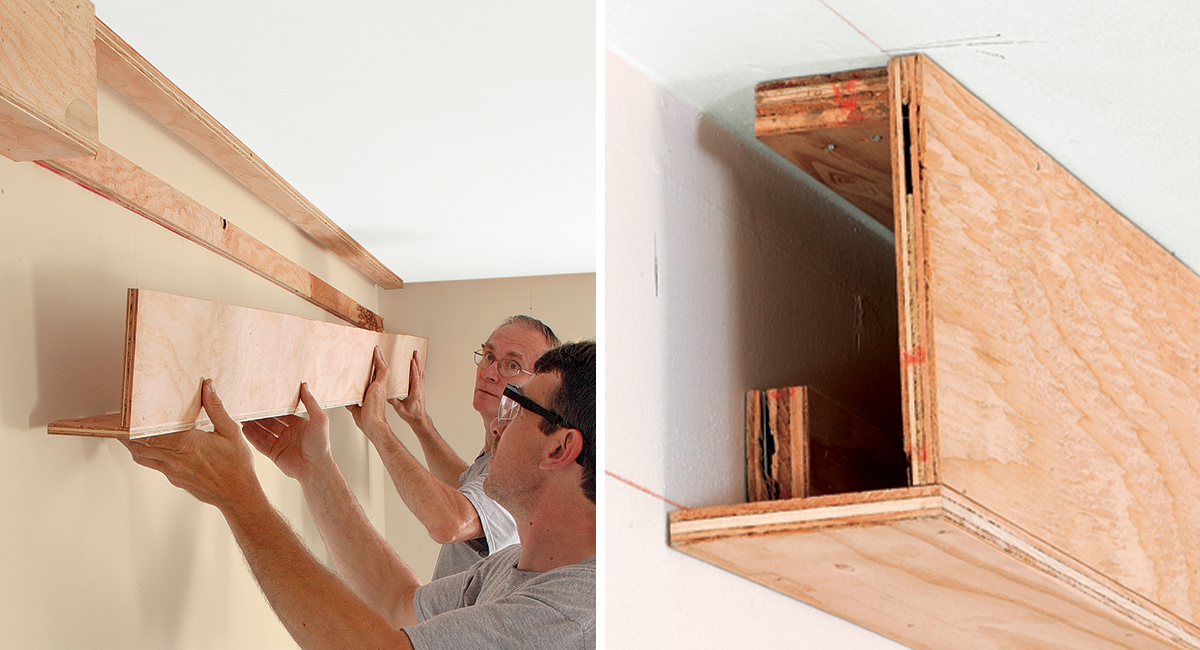 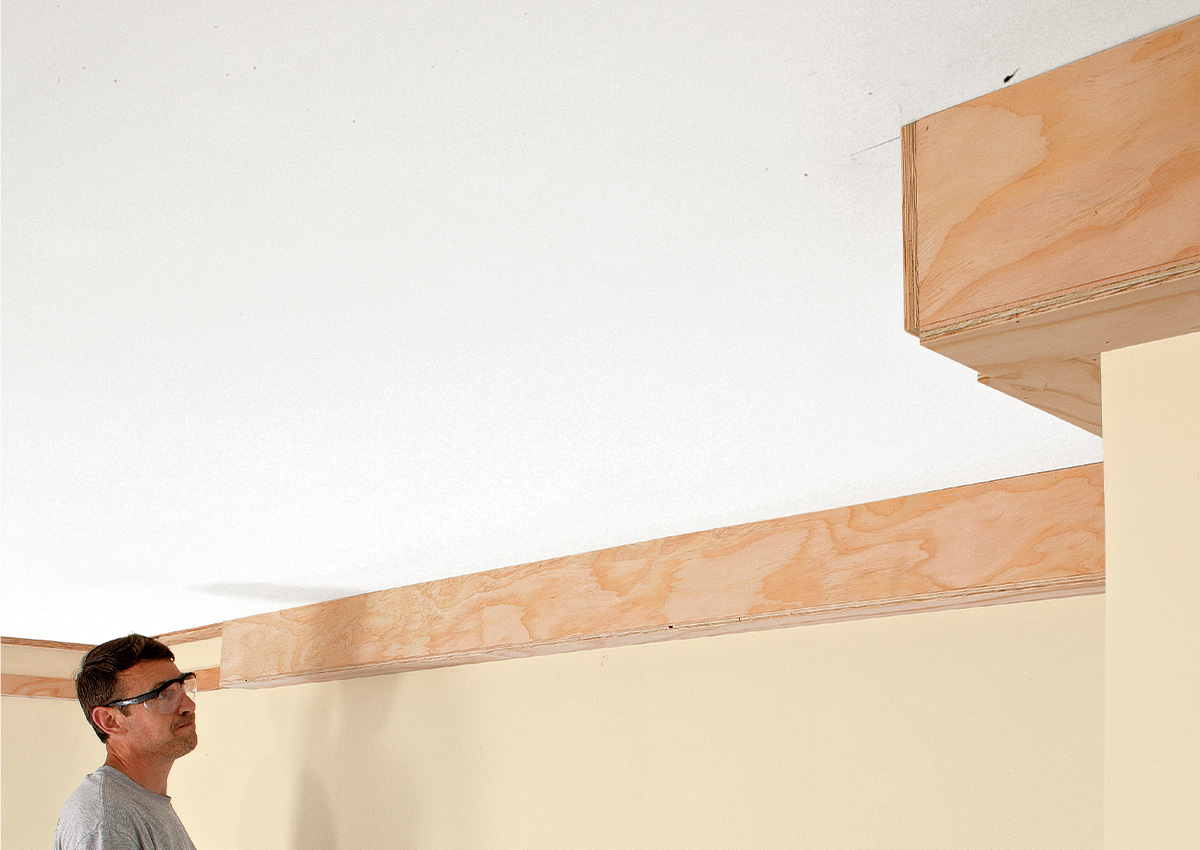 Molding starts from the bottom

Once the blocking is up, we snap blue lines to mark the perimeter of the molding on the wall and ceiling. Flat stock goes on first, usually the soffit, followed by the fascia and the lower frieze. Butt joints that are biscuited and glued work best here.

The bed molding comes next. Any profiled moldings are coped on inside corners and mitered on the outside; field joints are easiest if butted. Yellow glue or urethane construction adhesive keeps the joints from moving later. The configuration shown is made from stock profiles available at any lumberyard. The ceiling frieze, a baseboardlike flat applied to the ceiling, forms the base for the final piece of the puzzle, a 3-1/2-in. crown.

Unless the house’s builders were farsighted and blocked across the run of joists, at some point we’ll find that there’s no nailing in the ceiling. By carefully cutting inside the blue chalkline, we can open up the ceiling and insert plywood blocking that attaches through the drywall.

Earlier, I mentioned problems associated with humps in the walls. Another trick that straightens a really wavy ceiling comes in handy when the cornice design includes a ceiling frieze. We nail the outer detail of the ceiling frieze first but let the back section float over the imperfections. As we nail the crown to the frieze, we pull the back of the frieze to meet the crown and get a nice straight run.

Careful work is better than a fast fix 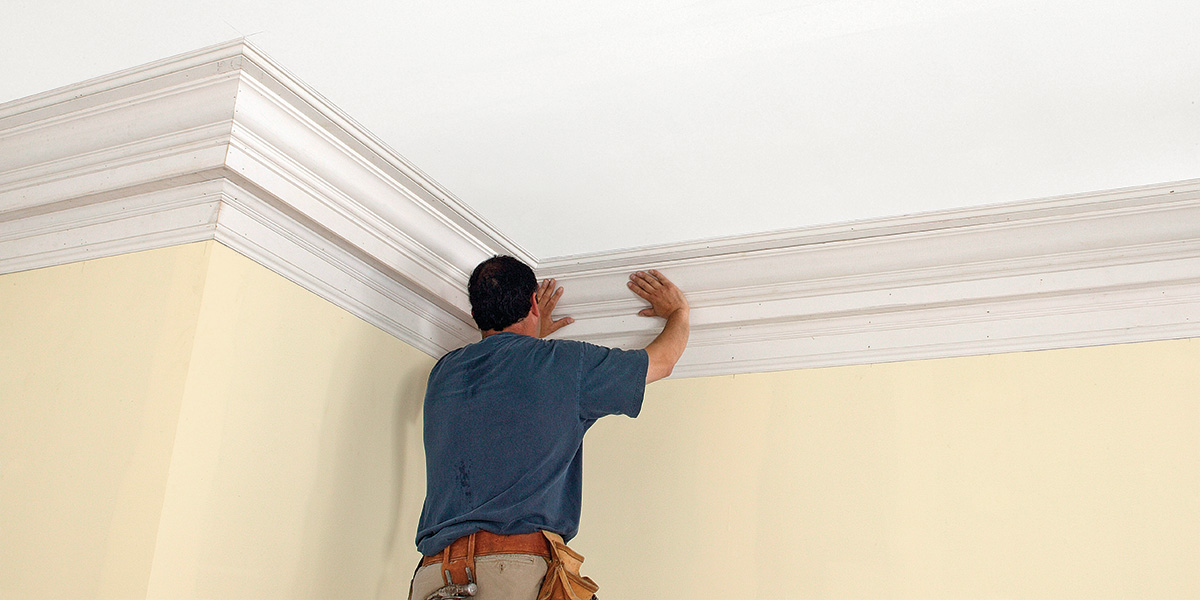 To view the article as a PDF, click the View PDF button below: