The Craft of Coffered Ceilings

A trim carpenter problem-solves a tricky installation for a living room coffered ceiling.

Synopsis: Trim carpenter and FHB contributing editor Gary M. Katz recently moved into a 50-year-old house in rural Oregon. He decided to install a coffered ceiling in the living room, but he faced some initial complications: The room wasn’t square, and it had a badly cracked, undulating plaster ceiling. In this Master Carpenter article, he explains how he overcame these obstacles. He established a right angle of two beams, which he used to base the rest of the layout. Using a mock-up, he figured out how to reconcile conflicts between the room features and the layout grid. With a plan in place, he built the backing, which consists of three-sided pine boxes that were later glued and nailed to the ceiling at coffer intersections and midpoints. The next step was staining and finish coating all the stock, cutting the pieces to length, then assembling the bed molding and crown molding for each coffer. To begin the actual installation, Katz snapped chalklines, then fastened the backing to the ceiling. After shimming the ceiling where necessary, he installed 1/2-in. MDF panels, which created a flat surface. With so much attention paid to the previous steps, installing the bed and crown assemblies was straightforward and quick. The final step was to assemble the perimeter coffers, which was done on site because of the irregular shape of the room. Katz includes a sidebar on how he thought through the design for his coffered ceiling.

A number of years ago, I moved from suburban California to a 50-year-old house in rural Oregon that needed a lot of work. I hired a local contractor to help me and to keep the work progressing when I was on the road. After making the house structurally sound, we started to attack the interior. I’ve always been a fan of the Craftsman style and wanted to install one of the style’s signature details, a coffered ceiling, in the living room. The rectangular grid of clear-finished moldings and box beams would be a strong complement to the room’s tapered columns. There were complications, such as a completely out-of-square room and a badly cracked plaster ceiling that undulated like the ocean. I also didn’t have the budget to do the work while the house itself was still being remodeled. By the time I was ready to install the ceiling, I was living in the house and didn’t want to make a big mess.

I approached my own job the way I would any other job where the clients were living in the house. After measuring the space, I designed and built a mock-up with the molding profiles, then used it to check my design in the room. I calculated the size of the rectangular grids and gave the measurements to the crew, who could then help me cut, finish, and assemble the components off-site. With that work done, we returned to the house, where we did the layout and installed the coffers in a fairly compressed time frame.

Solve layout problems before you build

I used a design mock-up (see inset photos) to reconcile the conflicts between the room features and the grid. Because the room wasn’t square, I established a right angle of two beams on which to base the rest of the layout. Throughout, I also had to maintain a grid layout in which each coffer wouldn’t exceed the size of the 4×8 MDF panels I wanted to use to cover the ceiling. 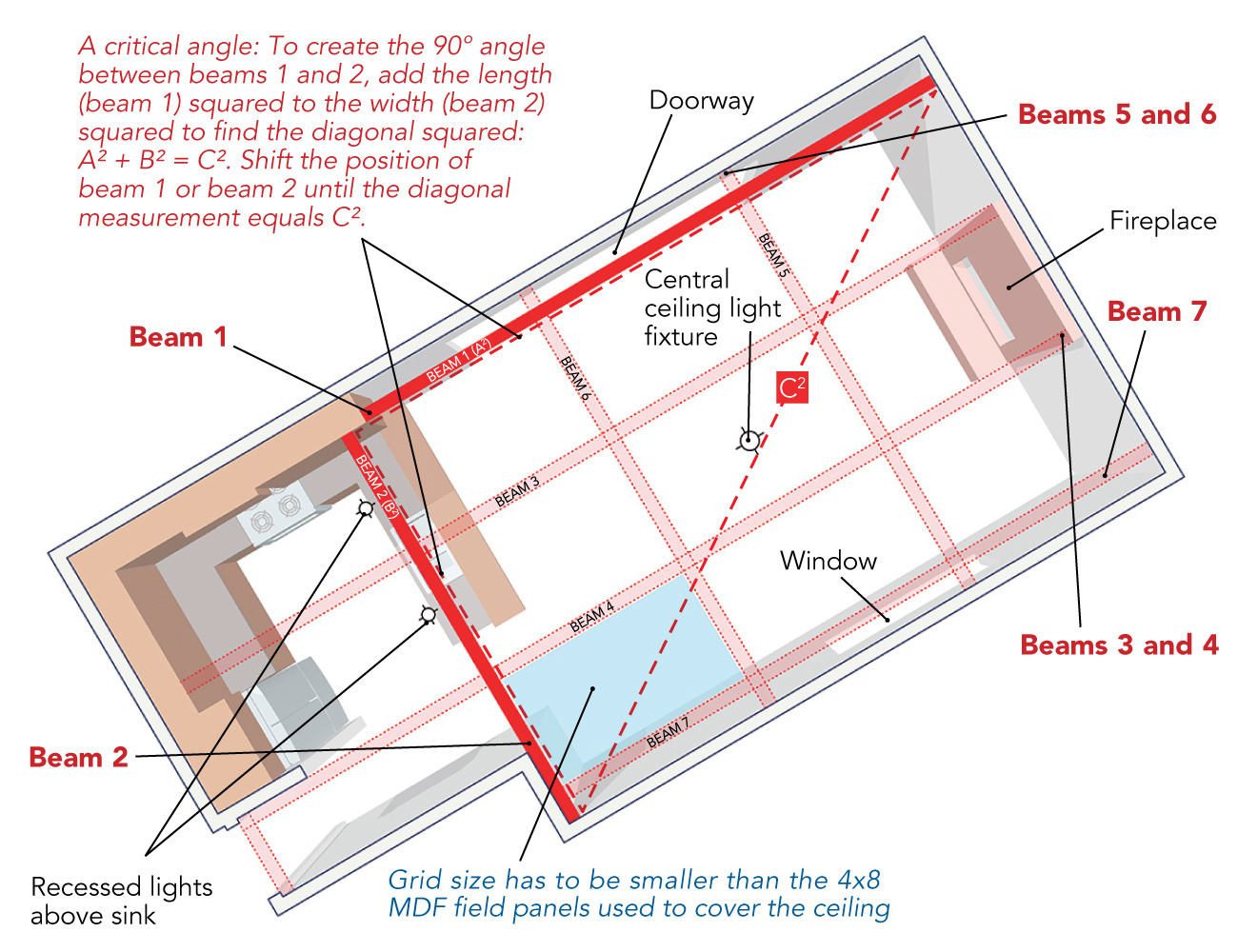 Beam 1: I didn’t want this beam to run across the face of the kitchen cabinets. Instead, I terminated the beam into the corner of the end cabinet, so that only the bed molding and crown ran along the cabinet face.

Beam 2: This beam is oriented along the offset corner to allow more room for recessed lighting above the kitchen sink.

Beams 3 and 4: These two beams run parallel to beam 1. They had to terminate into the fireplace brick, not the wall, or the space between beams would be wider than 48 in.

Beams 5 and 6: I made sure that the profile wouldn’t crowd the door trim, then placed these beams parallel to beam 2, equidistant from the central light fixture.

Beam 7: The last beam runs along the exterior wall, parallel to beams 3 and 4.

Build all the backing and the parts first

The backing consists of three-sided 1x pine boxes that are glued and nailed to the ceiling at coffer intersections and midpoints. I planned to space the backing so that I could span irregularities in the ceiling and still maintain the straight lines and square intersections that make it easier to assemble the ceiling components and get tight joinery. I made the backing in two primary shapes. Where beams intersect, I used a cross-shaped backing; in midspan locations and where beams terminate against a wall, I used a U-shape.

I started by ripping and cutting strips to form the spine of each assembly. (Later, the sides were nailed into the edge grain of the spines.) At the intersections, the tail of each spine projects beyond the sides, which provides a little extra room for fastening the backing to the ceiling with nails and construction adhesive.

In order to make accurate, repetitive cuts, I set a stop on the miter-saw table. An auxiliary fence registered the crown molding at a consistent angle. At this point, we cut and painted the 1/2-in. MDF panels as well.

Starting with the bed molding, we glued and clamped every miter, then nailed it with 23-ga. 1-in. pins. Next, we cut the crown to fit tightly inside each of the assembled bed-molding frames. We labeled each coffer, nested the crown frames inside the bed-molding frames, and carefully stacked the assemblies in my shop.

All of the remaining molding ran into or along the walls. Since we knew the approximate lengths of all those pieces, we cut them a little long, coped one end with a jigsaw fitted with a Collins Coping Foot, then bundled them in labeled packages for each coffer.

In the shop: Assemble the coffer trays

After the parts for each coffer tray were cut to length, stained, and finished, we glued and clamped up the bed-molding layers on a big table. Using the bed’s final inside dimensions, we measured, cut, and assembled each coffer’s crown layer, then set aside the finished assemblies.

While the parts were being prepared, contractor Scott Wells and I started the layout by measuring off the interior wall and snapping the lines for the first beam, which had to resolve precisely at the corner of the kitchen cabinets. To eliminate any guesswork, we snapped the lines to locate the width of the backing rather than the width of the finished beams. While we were at it, we also marked the locations of the ceiling joists.

Next, I calculated and struck a perpendicular line for the second beam by using an A² + B² = C² formula, measured from the first beam. From these two beams, we measured and snapped lines for each of the beams flanking the fireplace, making sure that those lines were perfectly parallel and square to the first two.

Trick of the trade: Install the backing

After snapping layout chalklines, we fastened the backing to the ceiling with construction adhesive and nails. We used 1×3 story poles cut to the width and length of each assembled coffer to accurately and quickly set the backing’s placement. 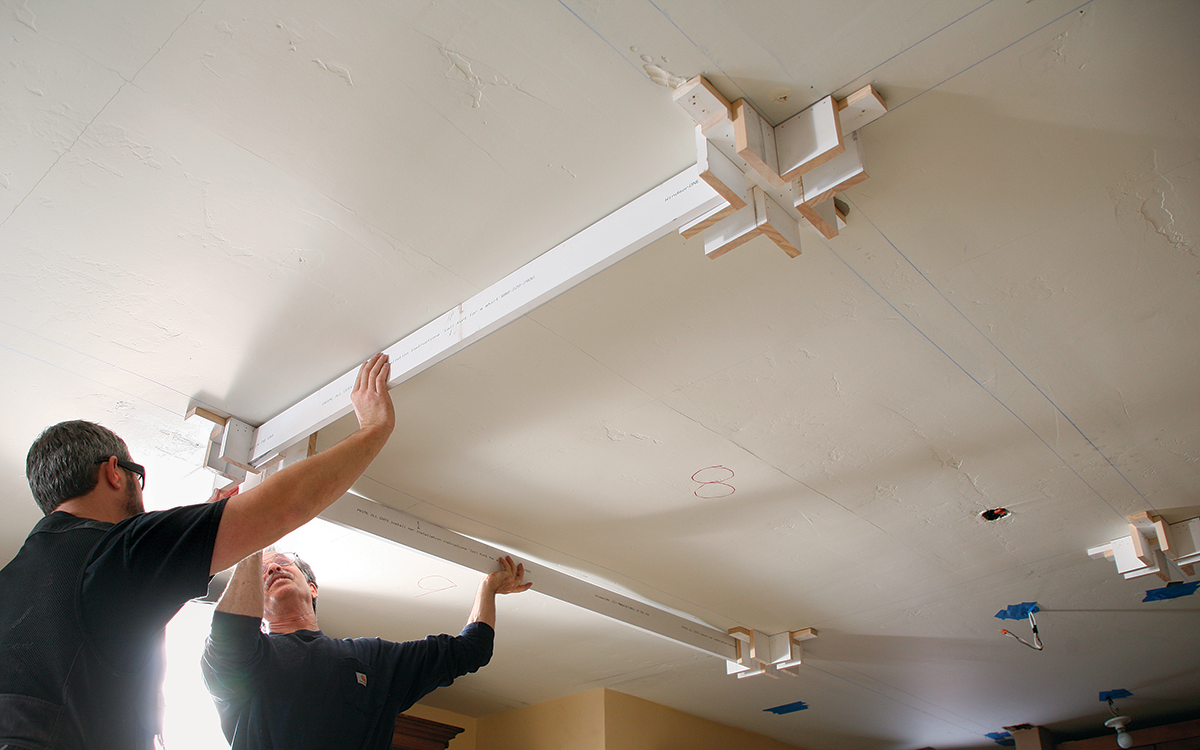 We installed the backing in the same order that we snapped the lines. First, we applied a liberal amount of construction adhesive to the back of each assembly, then positioned it between the layout lines. We shot 2-1/2-in. finish nails into the intersecting joists; if there were no joists in that area, we cross-nailed the backing to the ceiling.

After the backing was up for the first two beams, we used story poles to position all the remaining backing so that the assembled coffers would just slide into place. Because most of the coffers shared the same dimensions, we didn’t have to cut many story poles.

Because the ceiling was so uneven (±1 in.), I didn’t have the time to make it absolutely flat. At best, I wanted to establish consistent reveals. We used string to find the low spots and shimmed everything else to within 1/4 in. By stretching a string across the bottom of the backing, we quickly located areas that showed a gap of more than 1/4 in. We shimmed those areas with 3-1/2-in. squares of 1/4-in. plywood. We eyeballed the string, raising and lowering each end in both directions across the ceiling until we had established a mean.

With the ceiling shimmed relatively flat, we then installed all the 1/2-in. MDF panels with construction adhesive. Along the edges of the panels, we drove 2-1/4-in. washer-head screws into every ceiling joist. These screws were later hidden beneath the line of the crown molding. Finish nails secured the field to the ceiling joists.

On site: Assemble the coffers

We nailed the soffit stock in line with the backing, keeping butt joints aligned with biscuits and using clamps to keep the backing in plane with the stock. Then we carefully placed and fastened the bed and crown trays.

After doing the layout and making the ceiling corrections, the woodwork was actually the easy part. We installed the soffits using 1-1/2-in. 18-ga. brads to fasten the pieces to the backing. To reinforce all butt joints and ensure they were perfectly flush, we cut each piece to ­accept Festool Domino tenons. Biscuits would have worked, too. While securing the soffits, we used spring clamps to keep the backing from spreading out beyond the edges of the soffit pieces.

We slipped the crown-molding frames inside each of the bed-molding coffers. We nailed the crown in place with 1-3/8-in. 23-ga. pins, then nailed the bed molding to the beam soffits. These pins are so small that it’s easy to hide them with colored putty. Before driving fasteners, we clamped any areas that showed gaps. 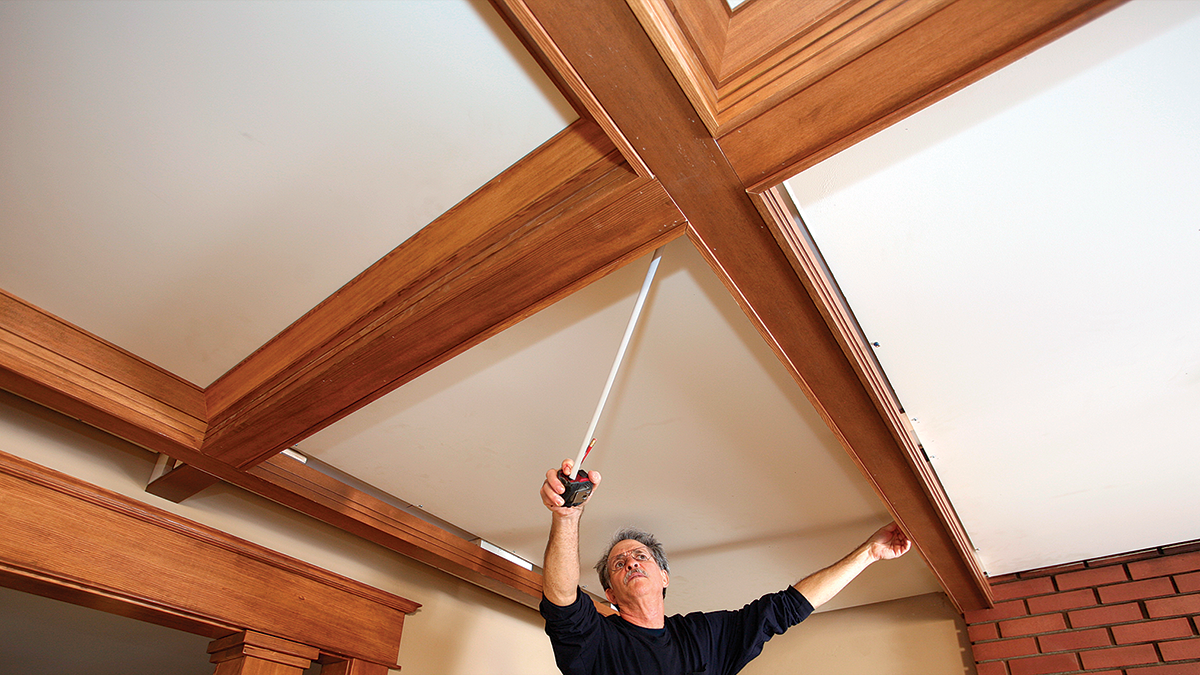 A sequence of copes at the perimeter

Because the coffers on the room’s perimeter were irregular, they couldn’t be assembled beforehand. Instead, each coffer’s parts were cut and installed on site. We coped the crown molding on the left end in the shop, kept it long on the right, then cut and installed it in a sequence that avoids a final double-coped piece. 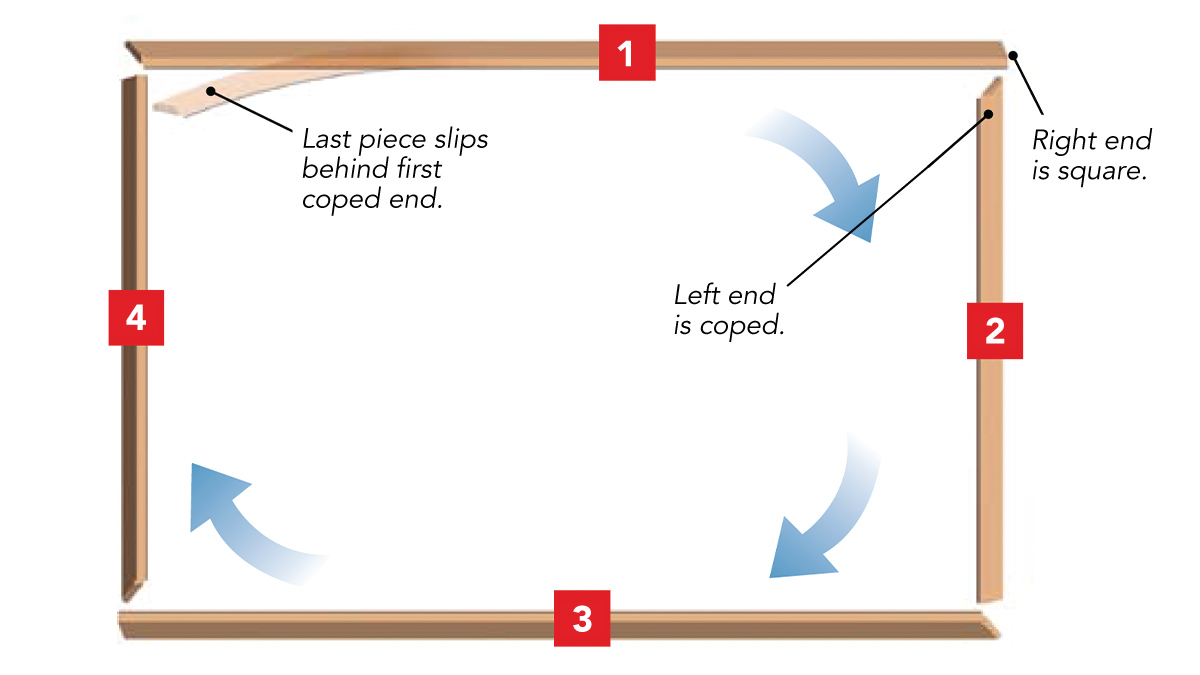 Piecing in the perimeter

With all the center coffers complete, we tackled the perimeter (or “margin”) coffers, which progressed rapidly because we had already cut and coped all the moldings. To maintain tight joints, we cut the long pieces a little longer and sprung them into position