How to Build a Coffered Ceiling with Box Beams

Built of plywood and MDF, these beams go up quickly, resist movement, take paint well, and even level a wavy ceiling.

Synopsis: Open areas might be nice, but they can seem cavernous without a way to differentiate the space. For architect and builder Joseph Lanza, one way to overcome that obstacle is with coffered ceilings. In this article, Lanza focuses on the construction of the box beams that he uses as the basis for the coffered ceilings he builds out of medium-density fiberboard and plywood. He also offers advice on dividing ceiling space and leveling wavy ceilings.

Like many of us, my clients tend to do most of their living in open rooms that serve multiple purposes. But in the small older houses in southeastern Massachusetts where I do most of my design and remodeling work, large rooms are rare, so I end up taking down walls or building additions to create them. Removing walls and adding small bump-outs change the scale of a space, which can make it look and feel awkward. When this happens, a coffered ceiling can create a more comfortable scale and restore order by dividing a big space into separate areas. Even though most of the beams in a coffered ceiling are hollow, they should look like a convincing structural system. Once the beams are built, each recess is typically finished with molding, but I’m focusing here on creating the box-beam grid.

Make use of existing beams

Nonstructural hollow box beams can carry a lot of architectural weight, but it’s often necessary to combine them with a structural beam when walls have been removed.

In the kitchen/dining/living area shown here, we bumped out a 40-ft.-long exterior wall by 6 ft. and replaced it with a 16-in. LVL beam supported by two 3-1/2-in.-sq. columns. The beam bisected the ceiling into long, narrow areas disproportionate to one another. I needed to divide the ceiling into sections that made sense visually while incorporating the LVL and columns.

To mark the divisions between the three areas, I began by adding two large box beams measuring roughly 9 in. by 9 in. Because most of the LVL was buried in the ceiling, I was able to make the two bigger box beams appear to carry the structural beam. To balance the design, I ran a box beam on the right side of the fireplace, parallel to and the same size as the wrapped LVL.

This extra beam made the main-ceiling sections roughly symmetrical throughout the room, but put the fireplace off center. To anchor and balance the fireplace, I added a matching beam to the left, but stopped it at the larger beam that divides the living and dining areas. The additional beam serves an important function in the living room. But carrying that beam through the space would have divided the dining area and the kitchen in an awkward, unnecessary way.

The Anatomy of a Box Beam

Most box beams are made of pine or poplar and 2x framing material. But those materials can be expensive and labor-intensive to work. poor dimensional stability is another limitation. use cabinet-grade plywood for blocking and MDF for the finished surface instead; both are relatively inexpensive and stable. structural beams also can be wrapped with MDF. 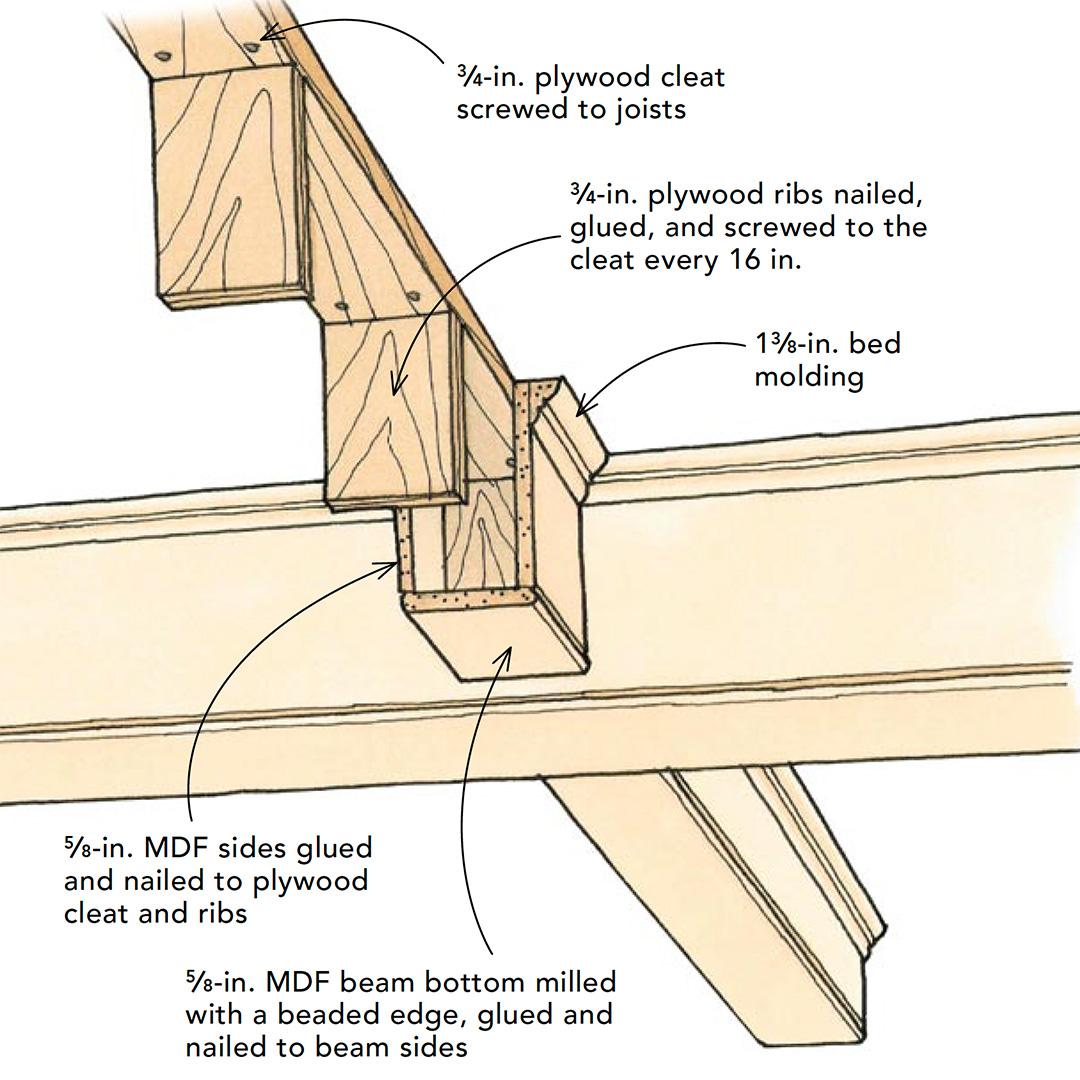 It’s not really symmetrical, but the layout works because at first glance it makes visual sense. The beams are big enough to make the ceiling look like a plausible structural system. If they were smaller, they wouldn’t look believable. The largest beams mark the major divisions in the room. Reducing the size of the beams between them, as you would if they were real beams, has the added benefit of making all the intersections between beams simple butt joints, which are fast and easy to execute.

Deep box beams can conceal out-of-level ceilings, so I make the bottom face level no matter what the ceiling is doing. Establishing a level plane with the beam bottoms means that the ceiling can wander up and down quite a bit without being too noticeable.

Keep in mind that the farther out of level the ceiling is, the deeper the beams need to be. The beams should also be sized to look convincing. A 1-1/2-in. difference might not look too bad if you’re going from a 7-1/2-in.-deep beam on one end to 9 in. on the other, but a beam that climbs from 3-1/2 in. to 5 in. will really jump out. In any case, don’t use beams that are too small, which is an easy error to make—especially with a low ceiling. The ceiling in the room I’m working on here is 7 ft. 6 in. tall, and the smallest beams are about 7-1/2 in. deep.

Sheet goods are inexpensive and easy to work with

With the exception of the bed molding at the top, the beams are made with 4×8 sheets of plywood and MDF. The backbone of the beam defines the shape, which is why I use low-grade 3/4-in. cabinet plywood like lauan or shop birch to build the blocking assemblies. Cabinet-grade plywood is more consistent and dimensionally stable than

framing lumber and has better gluing faces than CDX plywood. I use 5/8-in. MDF to finish the beam’s sides and bottom because it’s more stable, flatter, smoother, and easier to mill than pine or poplar. MDF also takes paint well and is much less expensive. Milling MDF produces fine dust, and inhaling MDF dust is a legitimate health concern. I use a dust-collection system and wear a respirator whenever I’m milling MDF.

Because all the parts are ripped from sheet goods, most beams have at least one joint on each surface. I find this has advantages over using full-length pieces of framing lumber and 1x stock such as pine or poplar. It lets me avoid measuring for most of the work, and it makes cutting precise joints easier. After I assemble and install one 96-in. section of plywood blocking, I hold the top piece (or cleat) of the next section in place and mark it to length. Then I take the piece to my saw and make the cut without pulling out a tape.

The limited length translates into an advantage when fitting the MDF side pieces as well. Each section of the blocking assembly has a 3/4-in. rib at each end. When two sections come together, I have a 1-1/2-in.-wide block centered 96 in. from the end of the run. Because MDF runs closer to 97 in. long, I can trim it to land in the center of the block.

The square butt joints fit well most of the time, but when they don’t, they’re easy to scribe in place and trim to fit if necessary. After gluing and nailing the first piece, I hold the next one in place against the opposite end to check the fit of the butt joint. Once that’s set, I mark the other end of the piece in place for the beveled-joint cut. When it’s necessary to scribe butt joints, this method can add up to four cuts per side (or bottom), but without any measuring. Because I’m making precise cuts on pieces shorter than 8 ft., it’s easy to keep an eye on the beveled-joint and butt-joint fit of that piece.

Build to a level plane, not from the ceiling

Before starting, get to know the room. You need to establish a level plane and work up from it. It’s also critical to find the low points of the ceiling because they become the reference point for building the first beams. I have yet to cough up the money for a laser level, so I level the ceiling the old-fashioned way. I snap a level line around the room, then run stringlines across the room in a few places until I find the low points. I leave a few of the stringlines in place while I build the deep beams, which I do first. Then I run a stringline across the deep beams to build the shallow ones.

Once I’ve decided on the layout and determined the beam sizes, I mill as much of the stock as possible ahead of time to make the job run more efficiently. I start by ripping the plywood for the blocking assembly 1-1/4 in. narrower than the final beam width to allow for the two 5/8-in. MDF sides. some of the ripped plywood is used for the assembly’s cleats, and the rest is crosscut into ribs and attached to the cleats. The crosscut-rib measurements are based on the low points in the ceiling, which vary for each beam run. So I cut the ribs and then rip the beam sides as I go.

Next, I mill the beam bottoms out of MDF. The edges align with the beams’ sides, so I rip them to the final beam width. To add visual interest to the beams, I use a 1/4 in. roundover bit to create a quirked bead at the edges.

No matter how you approach it, a box-beam ceiling is a big undertaking. As a carpenter, I’m always up for a challenge—unless I can avoid it. I haven’t done a project yet where points were awarded based on degree of difficulty. Until I do, I’ll always be looking for the easiest way to do a job well. I arrived at the method shown here over the course of a few projects as I tried to make a complicated job as simple as possible.

A beaded bottom completes the beam

After ripping the beam bottom to width, I mill the edges on a router table with a 1/4-in. roundover bit. I make one pass with the bit depth set to mill a simple roundover. I then raise the bit 1/8 in. and flip the stock for a second pass that creates a quirked, or shouldered, edge, which conceals the joint.

Photos by Chris Ermides, except where noted