How to tell the difference between a good cellulose insulation job and a bad one.

My first weatherization job was helping my dad insulate and air-seal the attic of the old farmhouse where I grew up. This was in the early 1990s, when he was running a weatherization and affordable-homeownership program in Sanford, Maine. Shortly after I graduated high school in 2000, my dad decided to go out on his own. He offered energy audits to homeowners and introduced the Energy Star Homes program to builders and architects. Eventually his business moved to New Hampshire, where public utilities better subsidized residential energy services. With my dad as inspiration, I started my first weatherization company in 2008.

I’ve always liked dense-pack cellulose because it does an excellent job of stopping air movement, and its hygroscopic nature allows it to absorb and release moisture throughout the seasons. When it comes to customers who want a better insulation than fiberglass batts, I’m often competing with contractors who install spray foam. Spray foam installs faster, but cellulose costs less—plus, it’s made of recycled material, is non-toxic, and is highly flame and pest resistant (see “Cellulose: The Perfect Insulation,” FHB #268).

And unlike the VOC-heavy spray-foam process, which requires that the work site be completely evacuated, homeowners can live their lives and work can continue while we dense-pack. Dense-pack cellulose can also be installed in freezing temperatures without the expense of temporary heat.

In the beginning I wanted to follow directly in my dad’s footsteps, advising builders and homeowners on how to solve their home-performance issues. Soon it became clear that there were few folks who were willing to do the projects without shortcuts. With Dad ever supportive, I decided to buy the equipment and get to work. Unfortunately, most insulation contracts are decided based on price rather than who does the best job. Admittedly, a quality dense-pack job is nearly indistinguishable from an inferior one. The difference is how tightly the cellulose is packed into the cavities, and you often can’t tell just by looking at it.

We blow to a density of 3-1/2 lb. to 4 lb. per cu. ft., which feels like a very firm mattress. At this density, the cellulose packs together tightly enough to virtually stop airflow and so it won’t settle over time. It takes a long time to insulate to this density (days for a whole house or large addition), so poorly trained or price-pressured contractors don’t take the time to do it right. We’ve been doing this long enough to know how long a job will take, and we keep a careful count of the bags we blow so we can double-check the density of the assemblies we insulate.

We use the manufacturer’s coverage chart (click here for more info on the chart) to calculate how many bags it takes to achieve the correct density. The thicker the framing, the denser the cellulose will need to be in order to be self-supporting. In general, one 25-lb. bag of cellulose will cover approximately 15 sq. ft. of 2×6 wall at 3.5 lb. per cu. ft. or 6 sq. ft. of 2×12 rafters at 3.8 lb. per cu. ft.

In new construction, dense-packing insulation requires stapling an air-permeable netting (Insulweb is the brand we use) over the framing to contain the insulation while we dense-pack. It’s important to keep in mind that the netting isn’t meant to hold the insulation in the walls, because when properly installed, dense-pack cellulose is self-supporting. Otherwise, it settles over time, creating cold spots and condensing surfaces. The netting simply seals off the last face of what then becomes a six-sided cavity, holding the insulation in place while we build up enough density to make it self-supporting.

We staple up the netting, ensuring that it’s free of wrinkles, which can cause problems when attaching drywall later. First, we staple the netting to the top and bottom plates and then to the outside corners of the studs (or whatever evenly spaced framing members we’re covering). Stapling the corners is important. This step, described by cellulose installers as lip-stitching, puts continuous lines of staples on the stud or framing corners. These lines of staples contain the intense pressure of the blower and allow the netting to bulge slightly in the center without stretching too far beyond the stud faces. If the insulation bows beyond the framing, it interferes with drywall installation, so we use a special roller to flatten the filled cavities. Lip-stitching controls the bulge enough so we don’t have to remove excess material.

Getting the right density

To achieve the critical 3-1/2-lb.- to 4-lb.-per-cu.-ft. density, installers need to fill the cavities with a small-diameter hose. Our blowers are connected to a hose that steps down gradually. First there’s 100 ft. of 3-1/2-in.-dia. hose connected to 50 ft. of 2-1/2-in.-dia. hose, which ends with a 6-ft.-long 1-1/2-in.- or 2-in.-dia. hose, called a whip. The whip is the secret to getting a good dense-pack job. I’ve seen folks try to use a 3-1/2-in.- or 4-in.-dia. hose to fill a deep roof or double-stud wall, but with such a large-diameter hose, any material more than a few inches from the hose end will not be packed tightly enough to prevent settling.

When filling double-stud walls and deep rafter bays, we section off the cavities with small pieces of netting. Since he’s filling a smaller space, the installer can reach all corners, ensuring the entire cavity is at the correct density. Inferior dense-pack jobs have low-density spots, which are common around utilities and inside complex or deep cavities.

Having the right stuff

Our company carries insulation and equipment in our two 20-ft. Isuzu box trucks equipped with Accu1 9400 cellulose blowers. The blowers are reliable and easy to field-repair, requiring only a few simple tools and a small collection of spare parts.

We use Beno-Therm–brand cellulose and have found it to be the cleanest product on the market today. It has no foreign materials—­­no plastic streamers or trash mixed in—and it’s treated with only boric acid, no ammonia or magnesium sulfate. Ammonia and magnesium sulfate are cheaper than boric acid, but they’re more corrosive and can have an unpleasant odor. The cellulose at the big box stores typically has both plastic contaminants and ammonia-based fire retardants, so I advise contacting a local supplier for the good stuff.

A dense-packed day in the life

We typically run a three-person crew. When we get to the site, two people begin air-sealing and installing the netting that holds the cellulose, a process we call netting. The third runs power to the insulation blower and runs the hoses to the work area. As soon as we have a wall or rafter assembly fully netted, we get the truck going with one person loading the hopper and one blowing insulation. The third crew member works ahead, air-sealing and netting. On a good day, we are blowing within 30 minutes of arriving at the site, but more often it’s 45 minutes to an hour. Throughout the day we monitor the bag count to make sure we are in the right ballpark in terms of material density and production. At the end of the day, we put the truck to bed and clean our work area thoroughly, which improves our relationship with the other trades with whom we’re sharing the workspace. 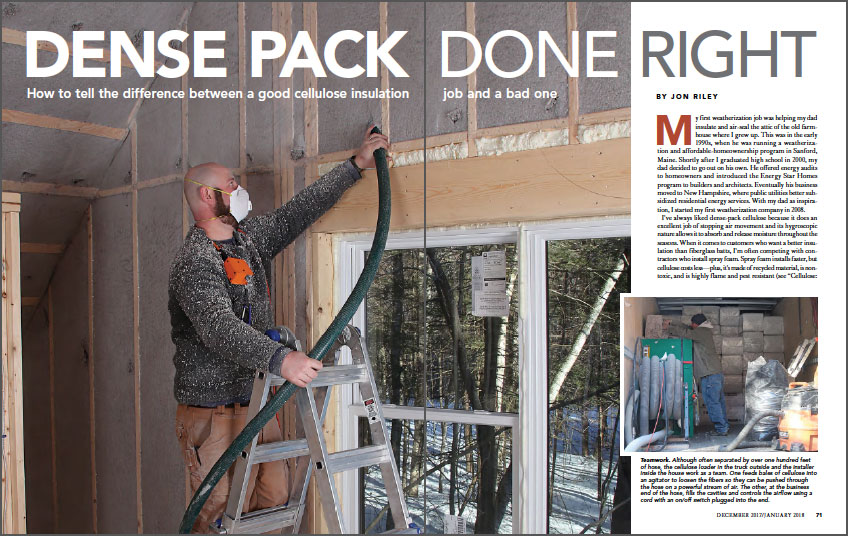 View PDF
Previous: Thermal- and Moisture-Control Layers for an Energy-Efficient House Next: An Easy Way To Build a Well-Insulated House